Yes, I know I said I'd do the next post from Exmouth. I lied, okay?
Our original plan was to head into Karinjini for a few days, then exit back to the coastal highway at Nanutarra, however reports of crowded campsites, plus big deep gorges that needed to be walked (climbed?) we decided to go straight down the coast road to Point Samson. Bugger, it was booked out solid for weeks, so we went to Roebourne.
One of the first towns up this way, Roebourne was once the hub of all that happened in the Pilbara region. These days it is displaying the final gasps of a dying town with almost nothing left but a fuel outlet, some Aboriginal artwork museums, and a hospital.
Upon arrival at our designated site, the fellow opposite came over and advised that “You’ll have problems gettin’ in there, mate”. He continued, “Too tight and too skinny”. He then said that the only way he was able to get his van in was to make use of the vacant site that we were about to use. I noted his van was a few feet shorter than ours, so maybe it would be tight.
Shirl took up her position; I moved forward under her control, selected reverse and we popped it in perfectly, first go. Our new friend came over and said “That was bloody impressive”. So, I guess we can now say that we have sorted out a procedure that works – truth is we’ve been reversing it perfectly into sites for this entire trip. Indeed, it shocks us now if we don’t get it spot on first go.
After settling in, I began climbing in under the sink to fix the ‘solar/battery smart charger’ where it’s mounting had come loose. Having finished, I exited the contortionist position that I had assumed and immediately felt severe pain in the lower back. I, like most men, stoically accepted it and said to Shirl that “She’ll be right, I’ll just sit down for a while and all will be good” (truth, I bitched and cursed and sought Shirl’s sympathy).  After some other symptoms developed in the lower body, we decided that a trip to the local hospital was needed. Result: the work under the sink simply confused the issue because after a quick test it was decided that I had a kidney stone – bugger. The pain was immense and intense and I found that the foetal position was quite reasonable. When I first arrived at the hospital, the nurse had asked “At its worst, how would you rate the pain out of 10”. I replied “maybe an 8 or 9”. “Oh, not a 10” says the lovely lady. My response was pure macho, he man – “No matter how it is, it can always get worse, so it can’t get to 10”.  Lovely Nurse left the room, and when she returned I was stretched sideways across the table, tears forming, voicing the most profane curses. This bitch now asked, so sweetly, “How would you rate the pain now?”  "It’s a bloody 11, and who do I have to kill to make it go away?”
Panodol Forte, plus a 90 km round trip to Karatha hospital the next day for tests plus a cat scan revealed I had passed it and was now okay. However, there is another teeny wheeny one developing in the other kidney.
Given that we had to wait some time for the results of the tests, we took the opportunity to pop out to Dampier and have a look. This town is but 20 km from Karratha and is where the Ore Loader is to be found. Dampier is also the location of Australia’s wealthiest people (based on averages). We expected to find mansions, yachts, Ferraris and other such expressions of great success, but what we found was something bordering upon a lower, make that lower lower middle class. The shopping centre was a total joke with all but the lowest stocked IGA supermarket – ‘supermarket’ it didn’t even rate as a below average market. Why? Well, for statistical purposes, the town is the home of many fly in fly out (FIFO) workers, plus those who have chosen to live there while working on the Ore Loader. The wonderful world of statistics! 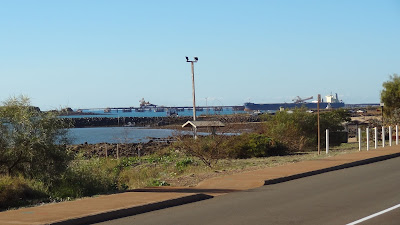 Dampier Ore Loader - not quite the up market town expected.
We also noted that Karratha has, as everywhere in the tropics, an abundance of steel framed, aluminium clad homes. Given the huge quantity of termite mounds, we think that these may be the reason, however it does look odd to see very large McMansions built with corrugated metal!
Once my little medical drama was sorted, we took the time to explore the coastal area around Roebourne. Cossack is now totally deserted but many of the old stone buildings remain and are in remarkable good condition. 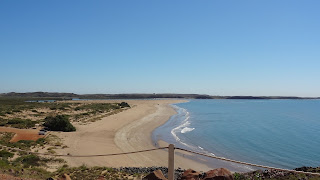 However, at Point Samson (which was our original choice to stay), the town has no great remnants of its history, and has evolved into a holiday village but without any shops! If you want something, go to the caravan park office – if they don’t stock it, go to Wickham (15 km), or if your needs are greater, Karratha (50 km). 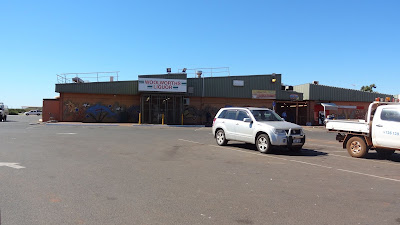 The front of the Wickham Supermarket - I'm not sure Woolies have their priorities right!

As we drove toward Point Samson, we noted an entry, accompanied by numerous signs warning of “NO ENTRY” or “KEEP OUT” etc, at the Cape Lambert ore loading facility. We had never heard of it so we did what everyone does and Googled it. Wow, it has Australia’s highest jetty which juts out nearly 3 km into the sea, and holds pretty well all the records for loading ore – most per day or month or whatever, most ships loaded per whatever, and it loads 40% of the Pilbara ore!  Why don’t we hear about this place as we do for Port Hedland and Dampier?
Next place for us was Onslow which is 80km off the highway, but right on the coast. And what appears to be a standard day travel, we met up with the intrepid bike riders again. This time they were 40km short of Nanutarra Roadhouse.
Onslow’s history was founded as many towns up here, upon the pearl and salt industries. The former has ceased, but the latter is going at full steam ahead. 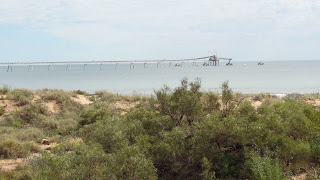 A new industry has landed at Onslow’s shoreline because of it’s proximity to the off-shore gas fields (Montebello and Barrow islands). The area has thus attracted the interest of the big gas producers who are building Australia’s largest gas plant. The gas will be piped ashore, stored then shipped to ????? wherever, or piped onwards within Oz. This has created a real estate boom, with the pub, a typical 2 level Aussie thing being bought for $450K in 2005, now due for auction with a reserve of $5,000,000. 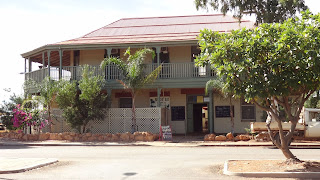 Like every caravan park we’ve been to, the two at Onslow were filled to capacity and beyond. We ended up sort of sharing a small site, plus 1/3 of the adjoining one! Most park guests were there for the fishing with boats of all sizes spread around the town. 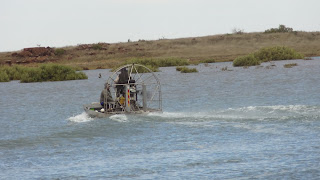 Fishing from an 'Air Boat' - goes rather well.

There didn’t seem to be much thought about throwing a line in from the shore.
Ningaloo. What an amazing place; 150km (or near enough) of beaches and coral reef. Note that it isn’t a single long beach, but many smaller ones from a few hundred metres to a few km long. Some of those within the Cape Range National Park have official campsites which are packed solid and with a daily line up of those hoping (in vain) to get in.
The only town on the Cape Range peninsula is Exmouth, and if you’d been here prior to the late 1960’s, even that wasn’t here. The original purpose of the town was to service those working at the (then) new joint Australia – USA naval communications facility – if it’s owned by either of the 2 navies, and it floats, and it is anywhere west of Australia, then all radio traffic goes via this place.

These days Exmouth’s role is all about tourists and retirees who are into diving or deep sea fishing. Yes, they have the ubiquitous canal estate that seems to be a requirement for any seaside town. The only difference here is that the houses are built with metal frames and aluminium skins. 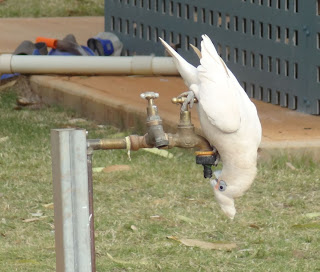 A very common sight around here

Our intrepid cyclists arrived only one day after us after riding their heavily laden touring bikes for 170 km in one day.  We arranged for them to set up camp under our awning while they took the opportunity to do some washing and general maintenance work – When Shirl discovered that they intended washing in plain water, she took over and used real laundry detergent to do their washing for them.She was duly rewarded with great glee when they got them back. 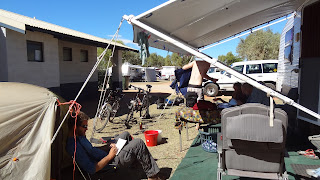 Our campsite looked a bit crowded for a few days

I took them over to the other side of the peninsula to see the reef as it is over 20 km just to get to the start, and then continues for over 70 km. 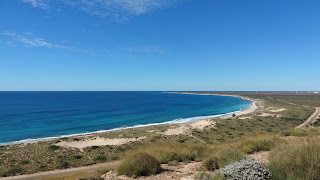 A view of Ningaloo from Vlamingh Lighthouse 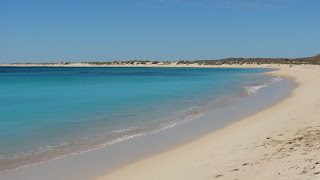 Wobiri Beach - somewhat crowded!  It's but one of a hundred or so.
Their highlight was to go swimming (1st time in Oz) on one of the hundred or so beaches that follow all the length of the Ningaloo Reef. One of the more popular ones is Turquoise Beach because of the extreme proximity of the coral – only a few metres from shore. 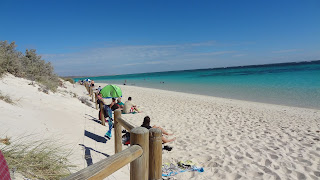 Turquiose Beach - the dark patches are the coral. 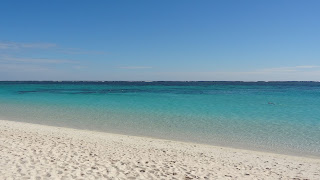 After Nick told us that he had lost 12 kilos over the last 7 weeks, we decided to take them out to a good feed. 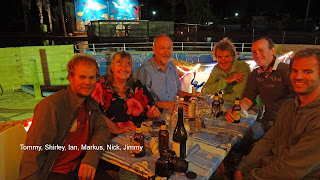 Whilst consulting the menu it came out that Nick had never been brave enough to try an oyster, nor calamari. We are quite proud that before the night was out, he had tried both these delicacies; and enjoyed both.
The following day the cycling demons departed, and we don’t think that we will catch up to them again given our respective timetables.

One of the tourist things is to float over the coral on a glass bottomed boat. We thoroughly enjoyed the morning and attribute a lot of this pleasure to the great guide/boat skipper. His continued stream of ‘one-liners’ kept everyone in laughter, but was really a fun way to impart a lot of information about how the reef functions. 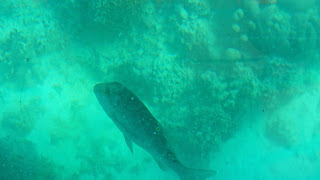 Fish so close that you wanted to reach out and touch them. 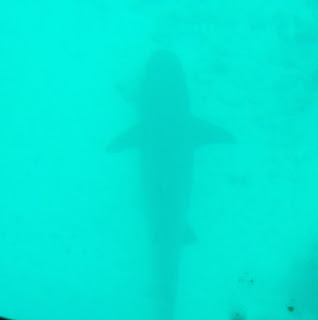 This shark is a vegetarian - he only eats vegetarians. 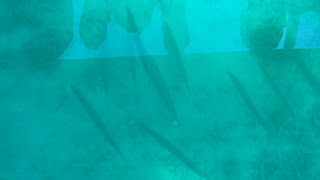 And a heap of Barracuda, each about 750cm to a metre long.

To sum up the 10 days that we spent here, “Bloody Great”. Beaches, beaches, and more beaches – and most were totally deserted;
Oh! What a feeling!
Next stop for us was Coral Bay which is about 150 k m from Exmouth and towards the southern end of the reef. Not so much a town as a tourist resort, Coral Bay has picture perfect beach, with coral reefs only a few metres off shore. Waves can be seen breaking over the outer reef about 600 to 800 metres away; near enough to be heard in the still of the night.

Each afternoon at 3:30pm two things happen at a particular spot on the beach; firstly, a crowd gathers, and secondly masses of quite large Spangled Emperor fish congregate.  A guide then distributes a few small pellets of fish food, firstly to the kids and then to the ‘big kids’. The photos show the result. 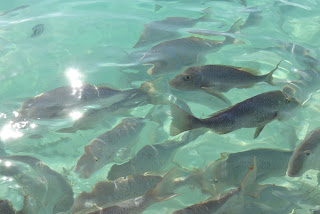 There are a lot of them. 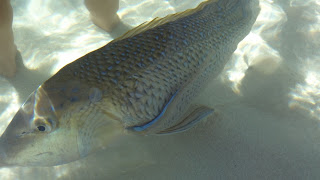 and they are quite large 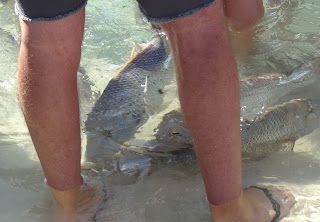 And they aren't scared

Apart from feeding fish, swimming, snorkelling, perving on those miniscule bikinis, and sunbaking we did little else.
PS – Shirl didn’t perve.