Distance is something that we of the eastern states rarely need to focus upon. Wherever you travel, every 20 or so kilometres, even when using the back roads and byways, there appears like some magical formula a village or town. You may say that the Hume Highway, that marvellous ribbon of concrete that joins Melbourne to Sydney, passes through but one village. However, it passes within a goat spit of many other towns, even cities.
Now consider those who choose, or need to travel the west coast of Australia from Kununurra to Perth.
If we momentarily exclude the final 500 or so km south of Northampton, the distance is a tick short of 3000 km. In that journey you will pass through only 3 towns, plus travel within 10km of 3 others. Of course there are the regular roadhouses (total = 11) which generally consist of a fuel outlet and a rudimentary camp and/or caravan ground.
As you journey southwards, you will need to deviate from the highway on many a time, and by significant distances if you wish to visit any other places. For example, Onslow is 80 km west of the highway, Exmouth is 160+ km, and from the highway to Denham (Monkey Mia) is 128 km.
Returning to that southern 500 km section, as it nears Perth it becomes quite similar to that found on the eastern seaboard with towns quite close together.
Now consider just what you get to look at during this time – kilometre after kilometre of ....... the same as the last kilometre! There are dramatic changes from time to time, but these are connected by vast distances of ... well, the same as before. Broadly speaking, the road is flat with many ‘jump-ups’ where the road has regular rises every 10 km of maybe 20 metres – just enough to give you something to focus upon.
To travel a similar distance on the east coast, you would need to leave Canberra and travel to Cairns via Sydney and Brisbane!  Imagine if that route had but 6 towns.
Getting back to our travels, we reluctantly left Coral Bay and headed off to Carnarvon which is of about 6,000 people and is one of the major food bowls of WA. There are very large irrigation areas along both sides of the Gascoyne River that when you look at it, seems quite odd – the river is dry!  What doesn’t appear to the casual observer is that below the sands of the river is a quite lush flowing subterranean stream. Couple this with the climate (no real winter) and you have year round fruit & veg.
Perhaps the biggest tourist attraction of the town has would be the “Mile Long Jetty” together with the small train that runs out along it. Like most of these very long jetties that are found in the west, it provides an excellent fishing platform that is well used by both locals and visitors. I didn’t use it because the fish, squid, and prawns don’t want to be there when I do – I reckon that anything before 10 am is just too early!  However, from a cost basis, it was hard to beat the local fish farms prawns at $10 kg. 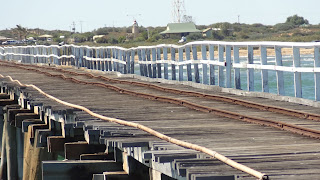 Note the railway lines - like this for the entire 1500 metres.

9th August and we moved down to Denham on Shark Bay. As the turn-off approaches, the wildflowers begin to show. Initially they appear as small clusters, spread thinly throughout the low scrub mulga wattles, with their canary yellow contrasting with the golden yellow of the bushes. Upon turning towards the bay the colours vary from yellow, through white to pale pink. The shrubs grow thicker with large patches being so thick that they obliterate the ground below, but with such a variety of flora that they appear as a verdant loop-pile carpet, displaying every hue and shade. When the next small rise is crested, the shrubs have thinned and the ground is now blanketed with white, yellow and pink, and every now and then, a border of deep purple. 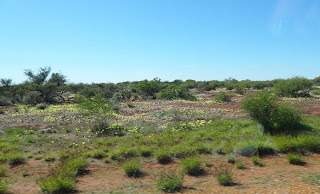 The flower show continues as great swathes that last for a few kilometres, and then disappear only to reappear later. Meanwhile, each low dip is filled with plants of rust red through maroon.  For the final 60 or so km, a new element joins in this riot of colour, as peeping between distant hills the azure blue of the bay waters heave into view. The trip was/is a truly magnificent sight that if what people tell us is true, will only get better as we head further south.
Denham is the only town on Shark Bay, or anywhere within about 330 km, and is truly a gem. The shops all face onto some of the bluest water you’ll ever see; the nearby national parks have some outstanding World beating features: plus the cliffs and water views just bedazzle you. Oh! did I mention that 24 km away is Monkey Mia resort where they feed the dolphins? 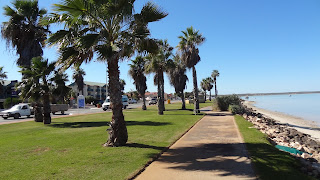 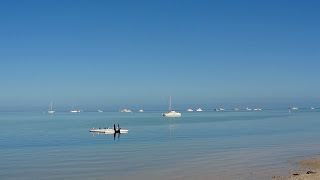 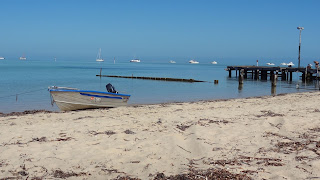 Bugger the fishing, I just wanna sit and dream.

Where do I start? Maybe if I introduce you to the two World exclusives in the form of the stromatolites and the shell beach. The former are quite dull to look at until you accept that you are looking at the World’s oldest known life form at over 3,500 million years old. The upper reaches of Hamelin Bay are so hyper saline that very few animals could cope, thus algae formed and evolved into a single celled life – thus stromatolites. The other special item is the shell beach – composed entirely of small shells which are up to 10 metres deep. Nobody quite understands why they gathered only here, or why they even gathered, but the result is very impressive. 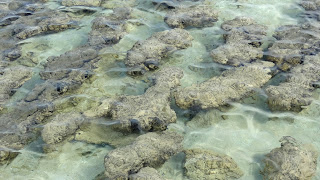 They don't look that old! Must use a great moisturiser. 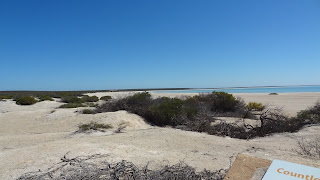 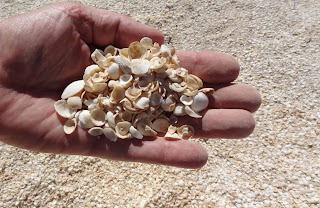 The shells of Shell Beach 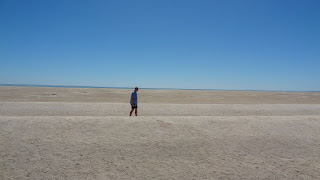 Lots of shells on Shell Beach

Monkey Mia is a resort based on a beach over the other side of the peninsula, and apart from the dolphins, has all the bibs and bobs that you would expect of a resort. The dolphins arrive each morning at about 9am, and then return a few times throughout the morning. At each visit they are fed a few small pieces of fish, but taking great care not to over feed them (max amount fed is 5 – 10% of their daily needs). 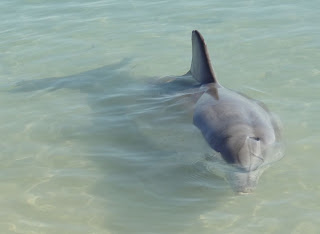 Hello Flipper (not it's real name, but I don't understand dolphin language) 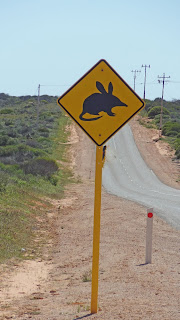 We went to the Ocean Park near Denham and had a great time, although it did feel a little weird having a great lunch composed of fish while at an establishment that exists to undertake scientific studies for the benefit of marine creatures.
While the large fish were good, the real feature was the odd and interesting such as face to face with a moray eel, or watching squid swim back and forwards in a tank. The tour culminated in some shark feeding which showed very clearly that when they bite, they mean it. 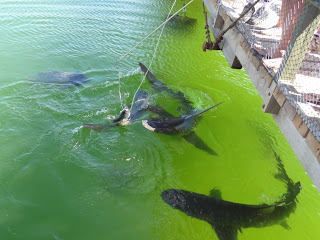 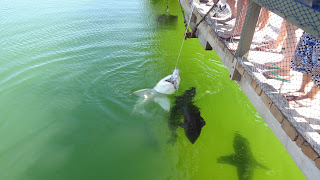 On a much sadder note, the park also has some turtles which are under rehabilitation after eating plastic bags. The bags have pockets of air, that when swallowed, can’t be expelled (from either end), thus the turtle finds that it can no longer dive to get food. Eventually, the poor critter will die of starvation, unless someone finds it and brings it to the centre where it gets hand fed until it manages to expel the air, but it is a very slow process.
When returning from shell Beach we took a detour to Eagle Bluff lookout. From this high vantage point the view looks down upon, and through the pristine waters below to clearly see the sea grass meadows where the dugongs feed. Also directly below is an island which is home to a number of sea eagles (hence the name – eagle bluff).
While preparing to leave the parking area we were approached by 2 ladies seeking assistance to recover 1 stranded husband who had got himself bogged. We followed them down the dirt road to a beach inlet where a 4x4 ute was stuck after trying to cross a sandy water crossing. The front end wasn’t far from going under water, and the rear was pointing skywards after he had stupidly driven down the very steep sandy bank, bottomed the guts of vehicle and was soundly stuck with a rising tide already over his bumper bar.
After checking that he had a recovery rope (I wasn’t going to risk my own snatch strap!) I drove onto the sand and attached his rope to my tow bar, only to look up and see that he had looped his end around his tow ball (really really stupid and dangerous). With that I realised that the guy had zero understanding about the process so I took control and explained what I expected if I was to risk my vehicle (and physical wellbeing). Result was that he was hauled clear with no problem. Post event discussion included him asking what gear I had used to so easily cross the sand – locked in 2nd and centre diff locked says I. Oh, I came across in auto says he – they’re out there, aren’t they?
Now the main issue – Shirl had taken photos of both the Eagle Bluff and the recovery fun, but can’t find them; they’ve disappeared or ??????
From Denham we pushed 360km southward to Kalbarri, and as we did so were delighted to find that firstly, the wildflowers continued to bedazzle the countryside, and secondly it seemed that we were coming to the end of the desert like country – true rural crop lands we spied for the first time in many months. 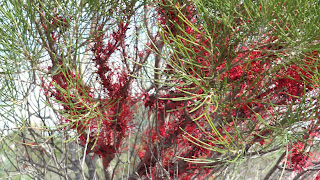 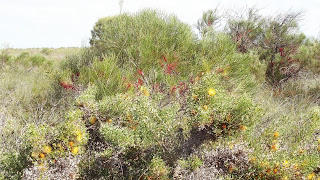 Beside the road to Kalbarri

Kalbarri is a small town at the mouth of the Murchison River. The key attractions of the town are its proximity to the Kalbarri National Park and the Kalbarri Cliffs. The cliffs are quite spectacular and somewhat like a lesser version of those on Victoria’s Great Ocean Road. However the tops of the Kalbarri ones are totally covered in wildflowers! 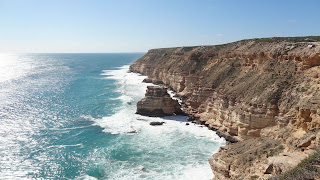 Access to the national park involves about 60km of rough corrugated road but since the roads are fairly straight it’s not too hard to get the speed up to 80+ so that you can skim across the top of them. Unfortunately, the volume of traffic means that you can’t do the usual and drive on the wrong side of the road to find some smoother ground. Our first stop was the well photographed Natures Window, where Shirl undertook some serious cliff walking. Yes, we’ve all seen the professional photographs in magazines, but when you stand before this natural wonder you’re still very gob-smacked. Next was the equally well known ‘Z Bend’ which also invokes one of those “oof” moments. 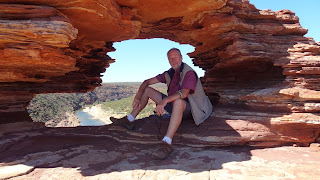 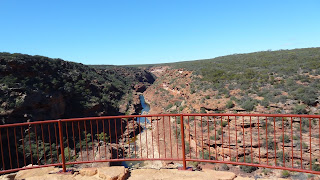 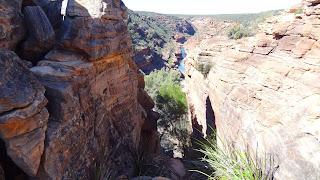 Z Bend, not from lookout

After spending the day walking, climbing, banging across a lot of rough road we treated ourselves to some of the best pub grub that we can remember – seafood, naturally.
On our last day at Kalbarri we visited the ‘Rainbow Jungle’ bird centre. Here they have an enormous variety of mainly Australian parrots, but also a few Macaws from South America. While a number of them are housed within their own aviaries, many others get to live in one of the largest free flight enclosures that can be imagined. Within this great space are sufficient trees and shrubs to invoke notions of a tropical jungle, with waterfalls and flowing streams. 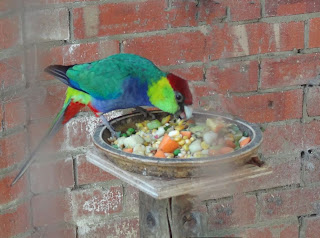 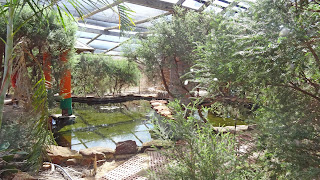 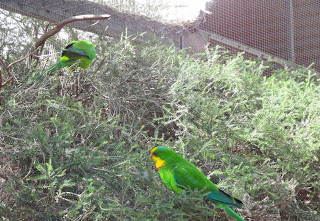 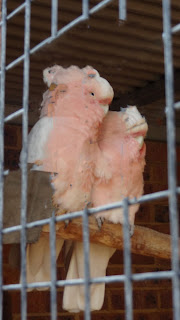 Of interest is that they have a few of their surplus birds for sale: want a Gang-Gang parrot, $1500. Or perhaps you’d like a pair of Red Tailed Black Cockatoos at $1000 each. 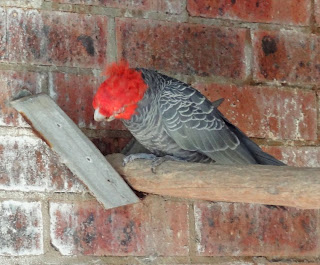 We are now in the fine large city of Geraldton.
﻿
Posted by Cob and Oma at 5:23 PM