Sorry for the long delay in posting an update, however with little or no internet access at many places, and at those that did we were focussed upon the latest updates from Le Tour, thus the blog faded into the background. We’ve come a long way, and seen so much since our last post, I am doing the update in two issues – both from Exmouth, but covering different sections.
Broome! This iconic Aussie town is a very interesting place that is laid out totally differently than I had imagined. There is the old or historical commercial centre, known as China Town and full of souvenir and general shopping places (Shirl bought a new dress), and ‘Old Town’ containing the original houses. Then there is Cable Beach – some 7 km away and facing directly onto the ocean. This area is so much newer and very different that it is almost as if it is another town. Resorts, cafes, restaurants, more cafes, bars, cafes etc dominate all else. Then there is the beach which I’m sure everyone knows is one of our more famous (indeed, world famous) stretches of sand. Immediately in front of the ‘Resort’ section is the area used by those who seek to sunbake or to just look beautiful, whilst to the north lies the section (17 km) available for 4x4’s to go fishing, or to blast up and down and generally have fun. This section is also an official “Clothing Optional” beach, thus making it the World’s longest nude beach.
The very large tidal range creates the rare phenomenon of “Stairway to the Moon”. This only occurs when there is a spring low tide at night (approx 3 nights per month) and we were lucky to be there for this special event. Town Beach is the location, and on these special nights a total night of entertainment is organised with markets, plus defined parking and police patrols all in place. The crowd is very impressive – people travel to Broome specifically to see this bit of magic. I don’t think that I have seen such an array of tripod mounted photographic equipment with lens so large that they almost needed their own tripod. Result? Worth a good trip just to see it, even if it only lasts for 15 to 20 minutes. Sorry that we haven’t a photo, but the ones that we took just didn’t quite make the grade – try google.
Yes, in case you were wondering, Shirl wandered around the markets and left with 2 really different scarves – or should that be scarfes? Anyway, she left with a scarf in one hand, and another scarf in the other hand.
If you grab a map of the area north of Broome you will find a place called Cape Leveque – pronunciation is a wee bit variable with the original French using the 2nd ‘e’ as in egg, and modern laid-back Aussie using ‘ee’ as in peek. Whichever you use, it’s a very special place.
We chose to go via an organised tour and when we were picked up at 7:10am we looked at the ‘bus’ in shock. We were to travel the 200 km to the cape in an extended wheelbase Landcruiser that held 12 passengers, and towed a fully enclose trailer – somewhat rustic to say the least. 15 km later we understood why this was the vehicle of choice – we started the 90 km of gravel; a badly corrugated 90 km (make that a very very badly corrugated). Bits of us that we didn’t even realise could wobble and jiggle did so. Throughout the 2 hours of rattle, bang, wobble, jiggle, slip, slide, and mayhem the driver/guide kept up a funny but informative chat about the area’s history and characteristics.
First stop (after we got to the bitumen section) was at Beagle Bay to see the Sacred Heart Church (google it). This was the church used in the somewhat recent movie ‘Bran Nue Dae’ starring Geoffrey Rush, and is just amazing with all the decoration being accomplished with pearl shell. 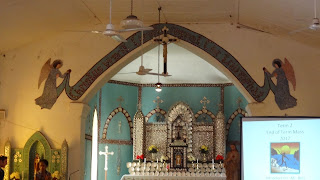 Next stop was at Cygnet Bay Pearls where we were shown the entire process of pearl production – bloody amazing, I didn’t know all this stuff. Apart from letting Shirl within inches of pearl necklaces worth a few hundred grand, and leaving without her buying any, the most discombobulating issue was that we were served a 5 star lunch while sitting in the midst of tropical scrub and looking out over the most azure blue ocean that you could imagine. 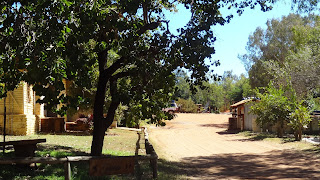 Not quite what you expect a pearl farm to look like 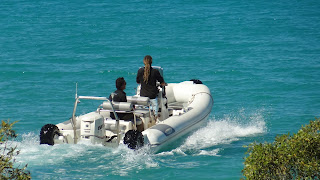 Note the wheels at the rear - it motors into the water, electrically raises the wheels and becomes a boat with real grunt. I want one!

From Cygnet Bay we pushed onward to One Arm Point, where the local aboriginal people operate the only Ardyaloon Trochus hatchery in the World. These unique shells, among other marine species, are polished, crafted and used to produce special jewellery items. However, the highlight was the breeding farm where they have about 2 dozen tanks, each about 4 metre diameter and holding shells, fish, turtles and ..... well, if it swims, it’s there. 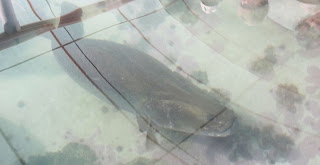 A metre long Barramundi - one of their female breeding stock. 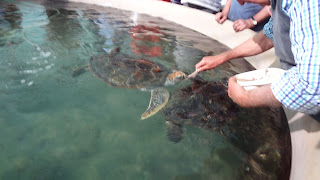 Anyone who doesn't get gooey about feeding a turtle has lost their heart. 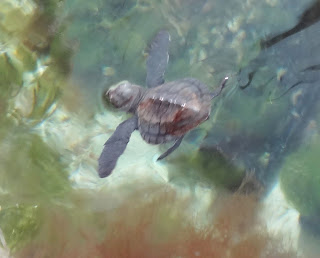 And a teeney 50mm long baby is very special.

Hand feeding metre long Barramundi, or other fish breeds, or turtles is fun – particularly if your guide has a wicked sense of humour. My best endeavours were insufficient because Shirl bought some shells: Bugger!
The tank farm sits on the edge of the King Sound and the Buccaneer Archipelago where the gap between the mainland and the nearest island is but 100 metres. With a tidal range of 12 metres, the rush of water trying to exit the sound as the tide ebbs is simply mind boggling. We were there about 30 mins after peak tide, and the volume of water racing between the ‘farm’ and the island was such that only an immensely powerful boat would be able to hold steerage against the flow. 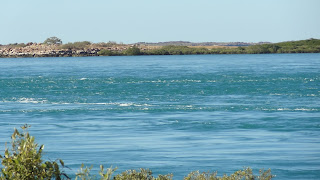 The force of this water flow was amazing.

Our final stop was the Cape Leveque beach, followed by a sunset on the adjoining red cliffs. This glorious end was followed by a three hour return journey to Broome – and yes, that included 90 km of those horrendous corrugations. Arrived home at 8:30 pm and slept in the next morning. 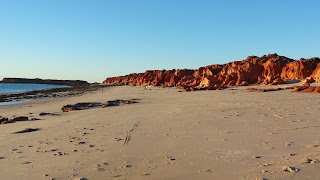 Red cliffs, white sand, blue water - about as good as it gets.

After a week in Broome we moved south to Eighty Mile beach, but along the way we caught up with our cyclist friends again. We pulled into Sandfire Roadhouse to top up with fuel, and sitting outside were the four blokes with, you guessed it, Tommy’s broken bike. After repairs in Broome, they had only got 120 km before it broke again. They had already arranged for someone to pick him up and take him to Port Hedland, so we left them with some emergency rations in the form of 3 pks of Tim Tams plus some fruit juice, and headed off.
The access road to 80 mile is 10 km of red, dusty, corrugated track and is in reality the rainbow to heaven. A caravan park which is full to overflowing every night, and sits behind a sand dune of quite some height, is what’s found at the end of this rainbow. No internet, no TV, no phone .... ahhhh bliss. Actually there is some mobile access, but only a tiny wheeny bit atop the dune, and this space is almost permanently occupied by folks with a phone in an ear, and can be heard saying “Say that again, I didn’t catch it”, “No, you dropped out again, or was it me?” etc.
With 140 km of beach it shouldn’t be a surprise to find that all the regulars keep a quad bike stored at the park, or even old unregistered 4x4 utes. Others just use their regular 4x4s. An hour before high tide you hear all the various vehicles heading off to the beach where they go as far as 60 or so km up/down the beach to their own secret fishing spots. At this time it looks odd when you stand atop the dune and see almost shoulder to shoulder people, all holding 12 foot long beach rods as they chase the elusive catch of their dreams. 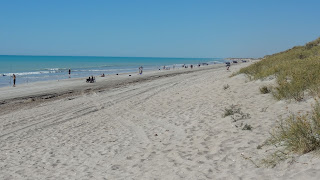 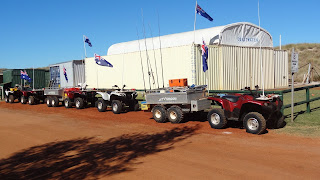 Sunset at 80 mile beach - almost looks as good as Broome's Stairway to the Moon
Meanwhile, the entire beach is covered in shells and this creates a funny, but fun pastime for those not quite gripped by the fishing bug. As you wander around the park you see all manner of shell decorations adorning annexes or awning poles – some even lay out their treasures upon tables so that others may marvel at the rare and exotic finds that they have found. And, yes, some are known to borrow their hubbies quad bike to head along the beach seeking unmined fields.
After a week of relaxation we reluctantly hitched up and headed further south toward Port Hedland, or as we soon renamed it, Port Redland. Officially the purpose of this place is to act as a very big port for the export of iron ore, however we decided that its real function is to create masses of red dust that covers everything. Waiting off shore for a port berth were 24 ships, and the port was full. Each ship is turned around within 24 to 36 hours, so that indicates just how much ore is heading to China. A second major output from Port Redland is salt – they have large shallow ponds into which they pump seawater. The sun does its bit and evaporates the water, leaving a crust of salt. They then refill the pond and go through the cycle once again, and again, and again until the pond holds so much salt that it is harvested with front end loaders. 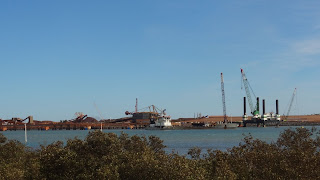 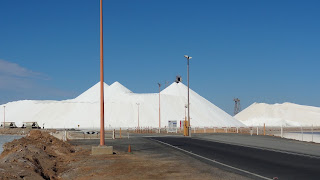 Okay, I got the salt but who's got the pepper?

After 2 days we had had our fill of red dust, so we headed off to Roebourne.
The next edition of our recent travels will be posted in a few days: I hope you can stand the suspense as you wait – we find that copious amounts of chocolate and wine help in these situations!
Posted by Cob and Oma at 11:19 PM