It’s strange how when you think that you have seen the best beach or mountain, lake or gorge, nature grabs your values and throws them in your blender of emotions. This was certainly the case when after deciding that gorges just didn’t get better than that at Katherine, we experienced the Ord River.
The Ord (plus a number of smaller rivers) feed into Lake Argyle, from which a number of overflow outlets plus the main Ord flow down to the diversion dam at Kununurra. From here, water for the East Kimberley irrigation scheme is diverted into a maze of channels.
Lake Argyle is Australia’s 2nd largest, after Tasmania’s Lake Gordon, man-made lake
and is equivalent to 18 Sydney Harbours (Yep, it’s really damn huge). During the ‘wet’ season, the daily inflow to the dam would supply Australia’s entire annual water consumption!
We took the opportunity to do a boat trip from the main dam, down the Ord River for 23km, until it hits the backwaters of the diversion dam, then turned around and returned to the dam. This is where our dilemma began.
Ultimately we decided that the Katherine and the Ord are, in their own way supreme equals. The Katherine Gorge is the epitome of serene tranquillity, where mirror smooth waters invoke calmness.  The Ord generates animalistic exhilaration and excitement as you hurtle through a twisting and turbulent rapid strewn rugged primeval and stunning landscape of spectacular high cliffs. 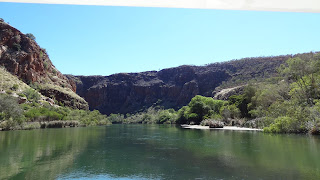 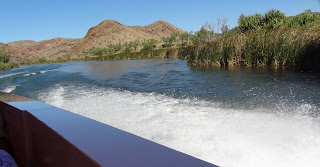 and all at exciting speeds
Of course the boat that we were on may have had some impact on our thoughts – it held 37 passengers, and had over 1000 horsepower pushing it down the river at 60kph. While the initial run down the river was great, the return trip against the river flow was a real adrenaline rush. 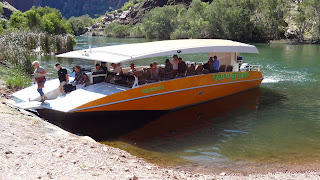 It looks docile .... until it gets angry
What an interesting place is Kununurra. Where we expected to find somewhat flat or at best slightly undulating country, we found some stunning rugged ranges and gorges to the south.
It seems a wee bit odd to realise that the location of Kununurra was selected because of the vast alluvial plains that lay to the immediate north. This smooth endless flat land extends from the town, all the way to the coast and quite importantly as it drops only 42 metres in more than 200 km.
With Lake Argyle providing a totally reliable water supply, plus the enormous flat plain with a constant fall per km and you have the perfect components of the World’s largest gravity fed irrigation area.
Unfortunately, our greatest feral pest, the Cane Toad has found its way from Queensland, across Northern Territory and is now in West Oz. The first area it has got to is the above irrigation area, and it acts as if it has found heaven. To learn a bit about this pest, I went out one night to work with the ‘Toad Busters’ who catch (and exterminate) toads. It was a surprise to find that bare hands are the tool of choice – one young girl even used a technique of grabbing them by the snout! No fear of poison glands here. 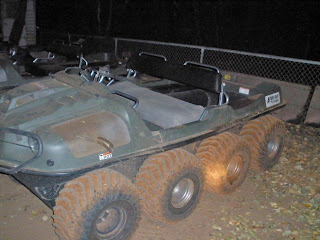 Twelve kilometres downstream from Kununurra is Ivanhoe Crossing; another of those famous barramundi fishing spots that have achieved iconic status. Due to the floods and unusually late rains, the crossing has been closed to traffic for the last two years. However, this doesn’t stop those who seek the thrill of catching a really big fish. Interesting to note that last week, a few km upstream a 4+ metre croc was caught! 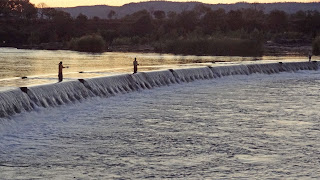 Note how deep and fast flowing it is - and big crocs live here!

Talking of crocs, (you like that little segue?), we did a 200km return day trip to Wyndham and found one of the best lookouts you could imagine (okay, that may be a bit of hyperbole, but it is really good). Wyndham faces onto the Cambridge Gulf, which in turn is fed by 5 rivers and thus the lookout is so called “Five Rivers”. It was a little disappointing to find that we had arrived at low tide, and with a tidal range of 10 metres, that is very low. The other thing the town has is a croc farm – they capture rogue beasts that are harassing various communities or towns and then breed from them. The young are ‘farmed’ at about 2 metres long (two to three years) and the entire output goes to France for use in high end products. 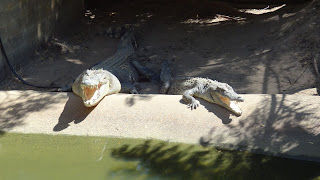 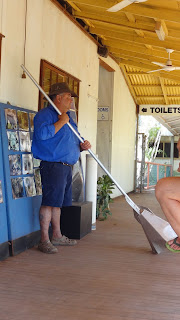 The Egg collector and his 'Cone of Silence' - waits until they open their mouth, stuffs this over their lower jaw, pushes like mad, hopes they don't break it before his off-sider gets the eggs from the nest. 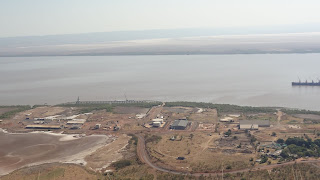 Wyndham Port from the lookout

Panorama of the Wyndham Old town 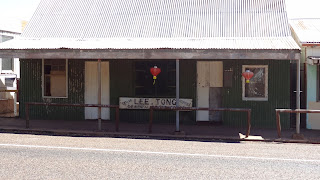 As we left Kununurra we were pleased that we had found another magic place with heaps to see. It would be easy to spend some extra time there, but hasten we must to Purnululu. 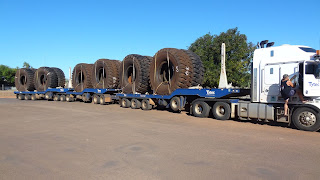 Sometimes you can't have too many spares.

Commonly known as the Bungle Bungles, this rather special place is firstly, quite difficult to get to, and secondly worth every moment (and many more) of discomfort. While it is possible to drive the 55 km of rough road in your own vehicle, it does involve some degree of risk as the road is almost entirely corrugated, and has many rough creek crossings, and is composed exclusively of twisty turns and twists. I chose to go via 4x4 tour bus. Given the rough road and the 6 km of walking, Shirl also decided not to risk her bad back.
Two hours of pounding in the bus brings you to the Cathedral Gorge – I’m sure that everyone remembers the Qantas advert with the kids singing “I Still Call Australia Home”. Two kilometres of soft sand and/or rocky gorge brings you into this place and your first impression is to utter a fundamental profanity; it is utterly breathtaking. Professional photographers have the equipment and skills needed to capture both the width and the enormous height of this chamber, but my efforts are significantly less. 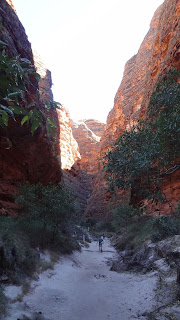 Panorama inside the Chamber - it rises over 75 metres above you - note the pure white sand floor.

The next assault on the visual senses is the overwhelming volume of the ‘bee hive’ rock formations. It is impossible to leave this huge area without feeling that you have seen something very special. 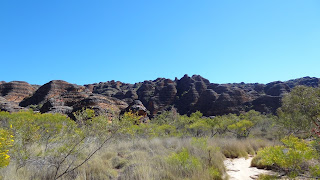 The Bee Hives go on forever. Easy to get lost in there.

Another 40 km pounding brings you to the northern section of Purnululu and the Echidna Chasm where the track is not the detested and difficult soft sand, but a rock and boulder strewn creek bed that has you longing for the sand. As you enter the chasm you discover that even the pro-photographers have their limits. None have captured the awesome towering height of the Echidna. It just goes up and ever upwards, curving such that direct access to the sun or sky is denied, and simultaneously narrows to shoulder width. A number of false ends appear – you think it ends, but then you find another path heading off at an angle, or that the large rocks seemingly blocking the way, can be overcome by a little judicious squirming. After 700 metres you finally reach the end ‘chapel’. I was so much in awe of this place that after exiting, I turned around and walked it again. 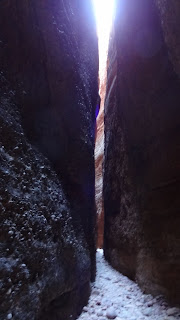 I knew I'd regret that extra spoon of casserole last night. 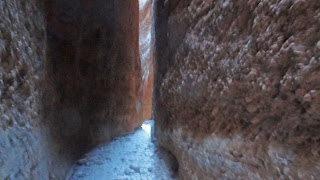 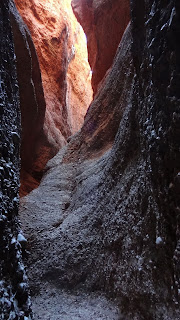 Getting a bit funny in here folks.

Upon leaving the Bungle Bungles there remains another 100 km of decreasing rocky terrain to Halls Creek where the country again resumes the flat grassed plains so typical of inland Australia. Fitzroy Crossing is, as you would expect, on the banks of the Fitzroy. This, the largest river in the far north is the life blood of the local cattle industry, but does have a very bad habit of flooding. A chart at the nearby Geike Gorge indicates that 12 of the last 13 years have witnessed a major flood. This explains why the caravan park had the office plus ablutions block and camp kitchen built on high man-made mounds – it looked somewhat funny, perhaps a like a lord peering down upon his minions. 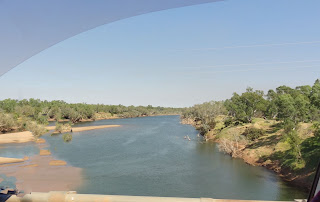 The Mighty Fitzroy at the Crossing

Derby! What an evocative name. Famous for the jetty and the boab trees, it offers much more. As Derby sits at the western end of the legendary Gibb River Road, it isn’t surprising to find the streets of the town are dominated by very dirty 4x4 vehicles. If the volume of local panel beaters, 4x4 repair shops, and car parts suppliers, local business prospers in its proximity to this track. 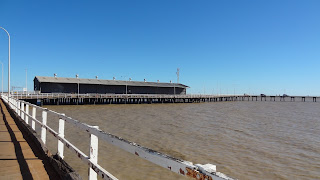 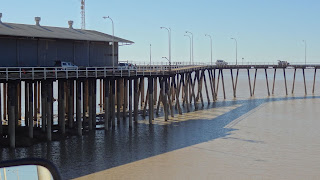 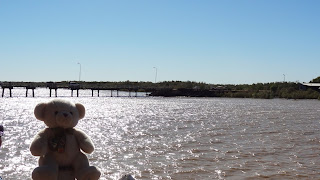 And Harry, our travelling Bear liked the jetty too. 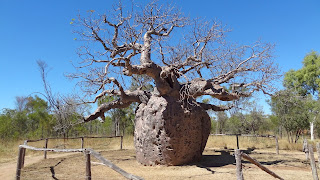 The Prison Boab - all hollow inside.

The day before we left, we returned to our van to find four young cyclists who were kitted out for a long ride: we were amazed to find how long. These four guys, 1 German, 1 American, and 2 Pommies had left Darwin on 1 June and planned to ride around Australia by early December. One of them, Tommy (the pommy), had no history of cycling and had joined the others because of his artistic skills in recording the journey. But, in the first 30 days they had ridden through Kakadu to Katherine, then to Kununurra where they started 10 days of purgatory to ride the 660 kilometres Gibb River Road to Derby. Toward the end of the Gibb, Tommy had some frame breakage to his bike, and then his gear derailleur ceased working. With no local bike shop, they had little choice but to call on a couple who were beside our site, and that they had met at a campsite near Katherine. A plan quickly evolved with Karen and Ray taking the bike, and Shirl and I taking Tommy to Broome. The other guys left for Broome at 12:30. 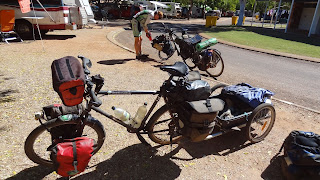 This was our first sight of the intrepid pedallers. 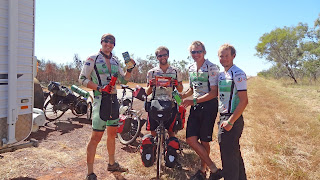 Along the road  - Tommy is in long pants.

A roadside energy stop where 3 litres of orange juice and a packet of Tim Tams were scoffed down soon had them ready for the remaining 60 odd km.

Their website is: http://www.lifeuphoria.com/, and to read their history is an eye opener.

These guys were the latest in a number of cyclists we have passed, and then re-passed as we have crossed the top end. Tommy was able to answer a question we had about one of these long distance tourers – a lone lady, obviously well past her youth has been on a similar timetable as us for a few weeks, and we wondered what the story is/was. Tommy explained that they had met Lizzie, and at 74 years old she has flown to Darwin each of the last 3 years, and then ridden back to Perth within 3 months. She is totally self sufficient, carrying all her needs on the bike. 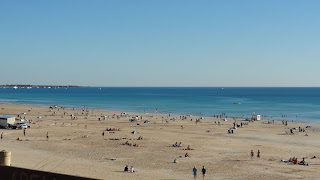 Cable Beach at Broome - note the huge surf, NOT
We are now in Broome where we will spend a week before pushing down to Eighty Mile Beach for another week. Unfortunately, or perhaps the opposite, this place has no mobile access, no internet access, no email, and very poor TV: just a long and glorious remote beach at the end of a 10 km dirt track. We will be back in the world somewhere around mid July. If each of my loving sons wishes to remain in the Will, they'll record each day of the Tour d’France.
﻿
Posted by Cob and Oma at 1:31 PM