We have had a few very busy weeks since we last updated the blog. After packing up and heading off from Darwin, we passed though Humpty Doo and soon afterwards noticed the engine temperature gauge climbing upwards. A quick check couldn’t find the problem – all belts were good (and so they should be as the car had had a full service only 4 days before), water level was down only a smidgin (just over 1 litre), no sign of leaking water. We called the NRMA (auto association). Nearly 2 hours later a tow truck and mechanic arrived and quickly agreed with my diagnosis of a ‘buggered thermostat’. After some technically interesting mobile phone conversations as we talked to our state based NRMA, who were co-ordinating with the Northern Territory Auto Association we were finally towed to Berry Springs where the NRMA paid for our van site (4 nights) while the car went to the local approved mechanics. The result was that the radiator had developed a leak in the upper tank and while not losing a lot of water, it couldn’t hold any pressure. Attempts to repair it failed, so in went a new radiator, and out went lots of $$$$$$. 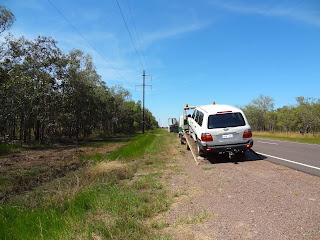 Poor 'Tom' cruiser gets hauled away.

Coincidence has a funny way of kicking in when you least expect it. Last year we met a great couple at Mount Isa (let’s call them C&D). Four months later we met another couple (M&D) at Mallacoota some 5500 km away from Mt Isa.  This year we used the marvels of modern communications to check where C&D were going to be and discovered that we would again meet up at Mt Isa.  Some 1800 km later and at the unplanned stop of Berry Springs, we found ourselves but 2 sites from M&D!  While chatting it came to light that a few months earlier this year, these two couples had found themselves sharing a free camp somewhere along the Stuart Highway. It’s a strange strange world we live in.
Further to previous comments as to the strange ‘fruit shop’ atmosphere that prevails when buying shower body wash. When we were in Mt Isa we bought some “Neroli & Ylang Ylang” – come on, what the ...  is Neroli? Is it grown? Is it mined? Is it extracted from some rare forest dwelling insect’s sweat glands? And what is Ylang Ylang – is it twice as good as just plain Ylang? However, it did smell nice, but it ran out while we were in Darwin.
We took the somewhat daring decision to buy two, yes, two different flavours (is that the right word?) – Cucumber & Green Tea, not plain black tea, but the better green stuff, and also Nectarine & white Ginger. The white, rather than other colours was thought to be a more aesthetically pleasing match with the green in the tea.
On the Friday before we left Darwin, I couldn’t resist the idea of going out on the massive local harbour (3 times larger than Sydney) and doing some fishing. Early morning and I was down at the wharf to join up with Brian Readman who is a local professional guide. I must say that it seems a little bit odd to go fishing in Darwin with an expert who has an accent that is as Irish as a leprechaun.
An extract from his web site may attest to the success.
Friday 1st June saw us out for the morning session with Peter             from Moruya, NSW, Ian Byrne from Canberra, ACT and Trevor             from Byron Bay, NSW where we crossed the harbour again with the last of the run out tide targeting the feeder creek systems seeing Peter nab a nice Golden Trevally along with a Golden Snapper and 5 Bream for the session. Ian also bagged 5 Bream along with 2 Trevally and a Queenfish for the morning while Trevor came away from the session with 4 Bream, a Queenfish and a Trevally.

After 4 days of no car and no tripping around, we headed off from Berry Springs to go to Kakadu. Rather than stay at Jabiru, we opted for Cooinda, at Yellow Water. We found one truly brave guy there with his tent set up within casting distance from the billabong. The “Beware of Croc” signs were everywhere, but he clearly thought otherwise – some folks just don’t learn. The sunset boat tour on the Yellow Water was mag-bloody-nificient – a number of crocs, but the big +ve was the large volume of water birds (plus a snake). 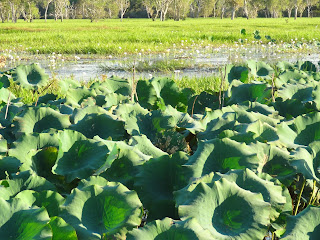 Wetlands extend from here to eternity

Sunsets just make me all gooey, but this one was special 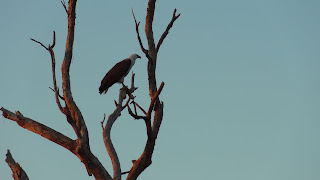 Sea Eagle in the wetlands
Way back a long time ago, Phillip Parker King was the first European to explore the area. He came across a river and found it was full of crocs, which he mistakenly thought were alligators. Thus he named the river as such. He next discovered another river that was also full of these ‘alligators’ – so he named it the West Alligator, and re-named the original one the East Alligator. Sometime later another river was found between these two, so it became the South Alligator. Notice anything odd here? Didn’t Phillip King, like all the other English explorers, have a list of inconsequential pommy Lords or politicians after whom to name things?

The East alligator is the border between Kakadu and Arnhem Land, and is also where Cahill’s Crossing is to be found. Photos of this causeway figure in almost every travel, fishing, 4x4, or camping magazine ever published and was also where we set off on a boat tour with a pair of aboriginal guides. Apart from the numerous crocs, we were enlightened as to which plants and/or trees were used by, and to what purpose by the aboriginal tribes. It is truly an eye opener to see just how many uses that a Pandanus or Paperbark tree can be put to. the big finale was to watch as one of the two guides used a woomera to throw a spear – if the Olympics ever allow the use of woomeras in the javelin throw, we would be at unbackable odds to win. 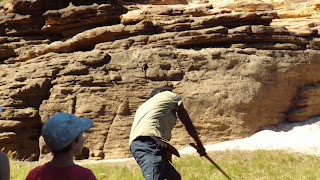 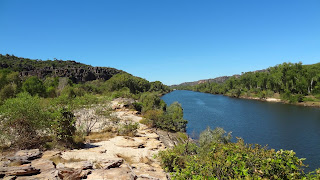 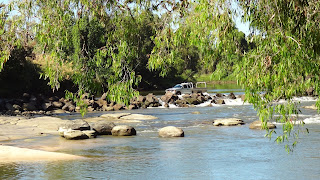 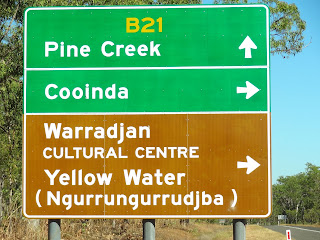 Your Mission is to pronounce the last word on this sign

Unfortunately, on our way back from the boat tour, we had a passing car flick a rock into our windscreen – bugger, it was only 3 months old.
As we left Kakadu behind and headed for Katherine, we had a great hope that we were also leaving behind the billions trillions of mosquitoes. They were even on a war footing each morning!!!!
Katherine is the third largest town/city in the Northern Territory and has as its big drawcard, the Nitmiluk Gorges. There are 13 gorges over a 15 km length of the Katherine River, but only canoe paddlers try to do the lot. For the less energetic, but more well heeled a number of helicopter trips are available.
Between each gorge there are rock bars that can be as short as 50 metres, and up to 100’s of metres. We did the most popular (and largest) first 2 gorges which has the magnificent and overwhelming “Katherine Gorge” as the second one. Shirl took 78 photos – thank heavens for digital cameras. 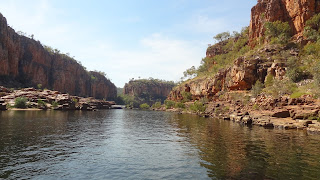 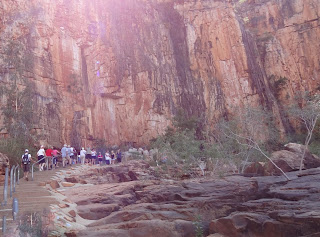 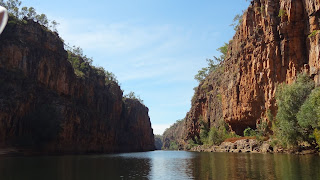 
Whenever we stay in country towns we check if they have a ‘bush tucker’ night. At Katherine we went out to a campfire where Geoff (Marksey) Marks prepared a great traditional campfire oven meal which included roast beef, roasted barrumundi, buffalo sausage, croc & beef mince enclosed in bushman’s pastry, plus a variety of roast vegies including bush tomatoes – and all flavoured with wild bush herbs. Of course this was all accompanied by damper and native lemon myrtle tea.
Earlier we had a real fun afternoon when we went to the Katherine Cultural Experience. Firstly, under the guidance of our full blood aboriginal host (Manuel) we painted a picture using traditional tools and techniques. Our next experience was to light a fire in the traditional way – I still think it’s easier to use a match!  And finally we threw some spears using the woomera. Shirl had two goes and didn’t reach very far so Manuel took her a few metres closer to the target. The next effort landed about the same spot as the two previous; I guess if she had to hunt her own food she’d starve. 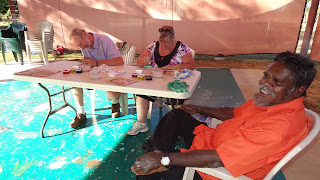 The Great Artists of the Future 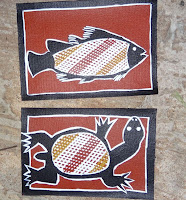 And the finished work (commissions may be arranged thru our agent) 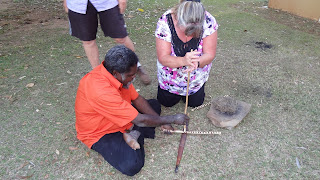 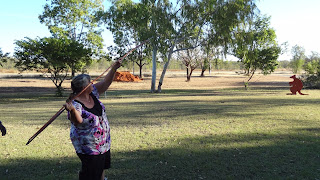 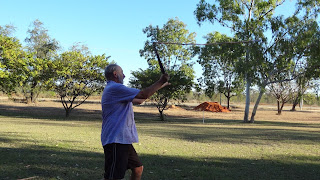 This is how it's done

Our final fun thing was to go down into the Cutta Cutta caves.  These caves are somewhat different than most limestone ones in that there is only a single entrance and thus they are very humid and get hotter as you get further in. They are the home to two rare colonies of endangered bats. With such an abundance of good food, the caves attract many snakes so as you wander through the maze, you need to keep your eyes alert. We only came across a small Children’s Python, but the guide told us of the larger pythons habit of curling around both the hand rails, or the stalactites above you. 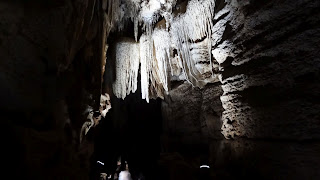 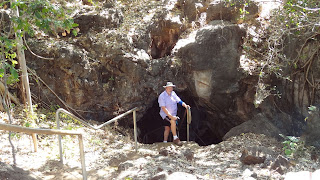 
To get from Katherine to Western Australia you must cross the 525 km of the Victoria Highway.  Like most of these roads there are but few places to stop, but this road did have some really great scenery as it climbed and wound its way through a couple of ranges. As we neared Victoria River Roadhouse, the views were excellent if stark and rugged. After the roadhouse, the road follows the river valley for a bit and then climbs up through a series of most impressive escarpments. Timber Creek is rated as a village, but it seemed to us to be way too small for such a title. Two very competitive, but basic caravan parks, a pub, police station, and store about sums it up. We chose to stay at the more competitive of the van parks! 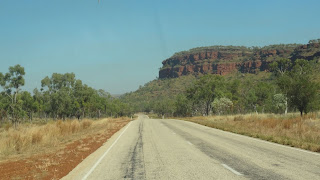 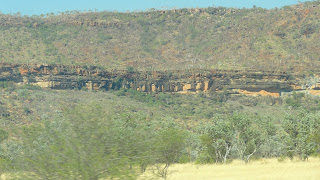 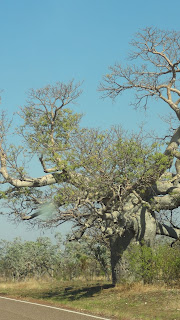 Friday morning and we found ourselves in Boab tree country as we wound our way towards West Oz. By the time we got to the border, the Boabs had become so prolific that we were very laid-back toward them. As you cross the border you are required to go through a quarantine search – line up, wait for the inspector who goes through you car, then your van for any fruit or vegies (or honey???!!!). They also randomly select vehicles to do an under-vehicle search for Cane Toads.
Kununurra is a town of 6000 that was established as recently as 1961 and served the construction crew as they built the Argyle Dam, and the Ord River irrigation scheme. Like all those towns whose origins lay in a specific 20th century purpose, the layout is all curved or circular streets, with a town square style shopping area. Given the quarantine of honey as you cross into West Oz, I understand that Kununurra has the highest sales in the country!
We are now set up on the banks of the lower Ord lake and in a van park that is absolutely full by midday every day – and so are all the other parks in town, and the local showground, and every free camp within ????? km from town.
We expect to be here until next Sunday, when we head off to the Bungle Bungles.
Posted by Cob and Oma at 12:46 AM