We are now in Darwin, having arrived a week ago and into blazing heat and body sapping humidity. It was amusing to see that the locals were finding the weather to be somewhat cold! So cold that some chose to slip on a pullover.
Mataranka was great fun with two very different style thermal springs, both of which we sampled. Mataranka pool is somewhat like a swimming pool as it is all concrete lined and kept at depth by a small dam. Bitter Springs is quite different as it is simply a section of a small river that flows significantly faster than that at ‘Mataranka’. The flow is such that it is very difficult to swim against the current, so the most enjoyable solution is to just go with the flow of the constant 34 degree water, and exit about 100+ metres downstream. 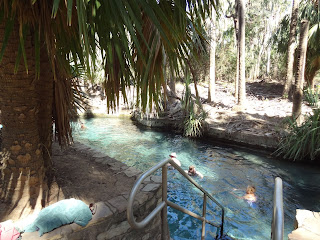 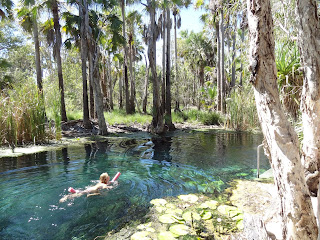 Bitter Springs (note the crystal clear water)
While lazing around in Mataranka pool, we had a real fun moment when a 60+ cm snake entered the water, swam across and over the shoulder of a young woman, pushed through her hair and continued on to the other side. It then found itself unable to get up the side, so it swam along the edge until it got to the steps where it stopped to rest. I imagine that inwardly the snake took time to revel in the confusion and consternation that it had created – not only was it there, but it commanded the exit path. Eventually it re-entered the water and swam off upstream and into the foliage of a water palm.
We also took the opportunity to see the barra man (went along twice). This guy feeds huge barramundi twice each day, and then catches one by hand – I might try this idea as rods and reels don’t seem to work for me! All the fish that the guy uses have been caught along the Roper River, and then taken back to his large freshwater billabong. Barramundi must return to the sea in order to breed, but they also need to undertake a really kinky little bit of nature – they are all born as males, and then must return to the sea when they are somewhere over about 80cm so that they can transform into females. From this it becomes apparent that the fish used in the hand feeding show are destined to remain as boys forever. 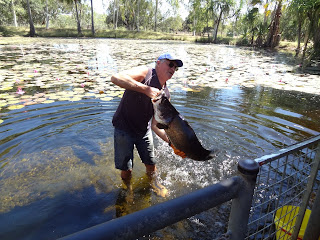 This method saves a lot on rods, reels, bait etc

I had been looking forward to seeing Litchfield Park for so long, that by the time we arrived I became a wee bit disappointed. Yes, the waterfalls were some of the best we’ve seen, and the views were  quite memorable, but it wasn’t so overwhelmingly magnificent as I had mentally built it up to be. A number of books state that it is even better than Kakadu. For us it didn’t match the hype, although it was quite good and would be rated as awesome if you were a bit younger than us, and into bush walking etc. And, we had zero phone or internet coverage. 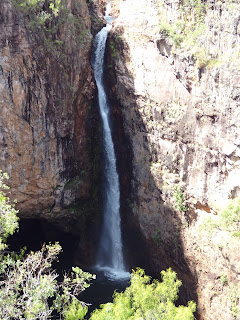 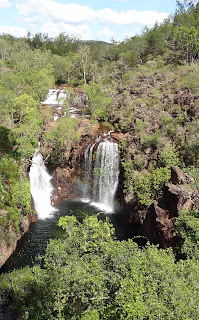 Florence Falls - The young & fit can walk down and swim right under these. 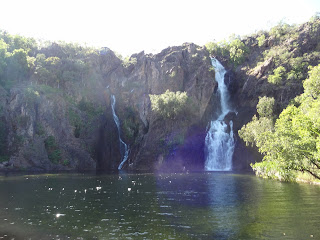 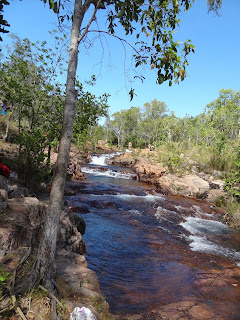 It couldn’t have been too bad as we stayed for 4 nights before heading north to Darwin. Along the way we stopped at a rest stop for lunch and found a breathtaking 5th Wheeler caravan. Self built as a ‘one off’ by the owner, it was based on a M.A.N brand truck, with the trailer (also self built) hitched via a 5th wheel. Can weigh up to 24 tonnes, it carries 1200 litres of fresh water, 5kw of generator power, 8 x solar panels, plus 360 litres of grey water. All this allows him to stay bush camped for 14 days without worry – and enjoying all the comforts of home. 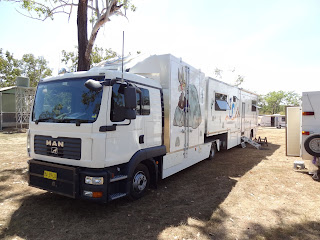 How to travel 1st class
Darwin! What a city. The first thing that struck us was the intense aqua blue of the water. Water appears to dominate every aspect of Darwin life, and lifestyle, and views. Whenever you drive somewhere, it is inevitable that you will see a continual stream of vehicles towing or carrying boats.
The concept of ‘distance’ was highlighted to us a few days ago when we were at Harvey Norman. The store didn’t have in stock the item that we were after, so the obvious question was asked: “Where are the other Hardly Normals in Darwin?” “We are the only one” came the reply – “There is another one in Alice (Springs)” said he as an afterthought. Yeah, right, 1500km away is the only other Harvey Norman in the Northern Territory. This distance thing was repeated today when we discovered that there is only a single K-Mart, plus a single Big W  in the entire NT!
We spent a glorious evening at Mindil Markets which are one of the city’s iconic institutions, and so they should be – held every Thursday and Sunday evening it attracts a crowd that is astonishing. While a lot of the stalls sell clothing, hats, trinkets, and leather goods, there is also more food stalls than any other similar event anywhere in Australia- or the World. Since it is at Darwin, and this place has the most diverse Asian population of any Ozzie city, it should be no shock to find that these food stalls reflect that fact. We ended up going for some curries, and found that they were exactly as advertised: really hot, and full of great flavour. 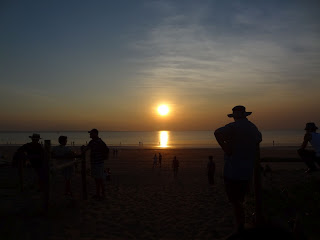 Sunset at the Markets. 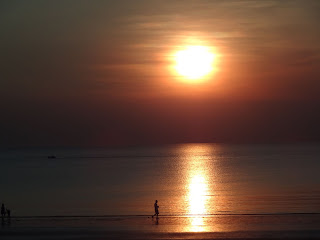 My artistic streak just needs to pop out every now and then.
Earlier in the day we went to the Crocosauris Cove which is right in the centre of the city – yep, right in the middle of the shopping precinct, they have over a hundred crocs plus Australia’s largest collection of Ozzie snakes. Strangely the thing that caught our eye wasn’t either croc or snake, but a fish. The huge size of the barramundi, and their speed at taking food was very impressive, but was completely overshadowed by the quite small archer fish who ‘shoots’ his food with a squirt of water. The young lady doing the feeding used long tweezers to hold out a maggot and the fish, laying a good metre below and with deadly accuracy, knocked the maggot into the water where it was gulped down. It was too quick to photograph, despite a number of attempts. 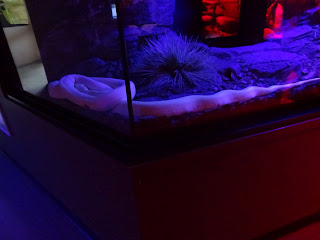 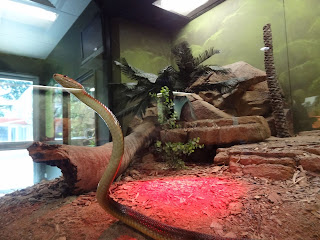 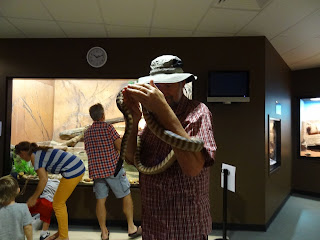 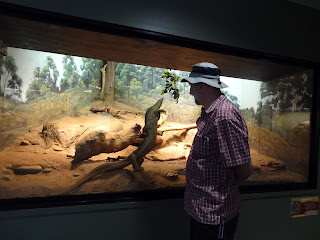 A goanna and me having a chat. 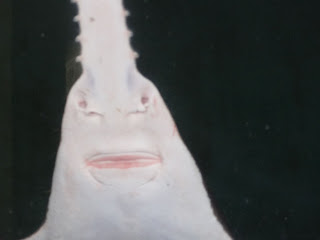 Guess what this is - a sawfish against the glass wall of the aquarium - I reckon I've seen blokes that look like this.

Yesterday we drove out to the Adelaide River where we did an absolutely superb crocodile boat trip. The crocs were enticed to swim over to the boat and then jump for their morsel of buffalo meat, but not before doing a few jumps and snaps. All this within less than a metre or two of us as we stood (cringed?) at the edge of the boat. 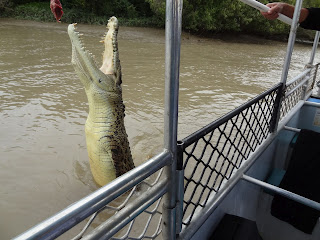 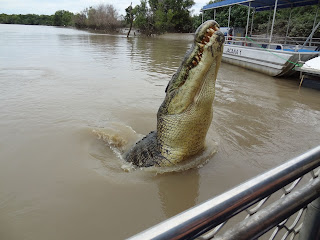 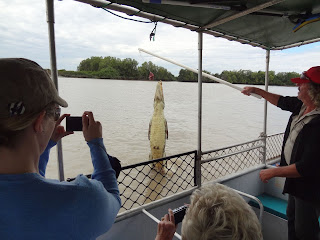 I believe that the Aussie Ballet is trying to sign up this girl.

We have previously been confronted by our own ignorance about just how much war time action took place on Australian soil – Darwin has vigorously reinforced that lack of knowledge. Darwin was bombed 64 times! I’m sure most folk if asked would guess something less than 5. Further to this, the number of aircraft used in each attack against us was quite astonishing. A visit to the WW2 “Defence of Darwin Military Museum” opened our eyes to the range and depth of the attacks, together with the horrendous damage inflicted.
Finally I have found the ideal fishing spot - 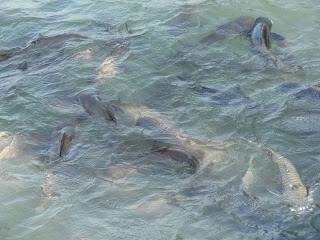 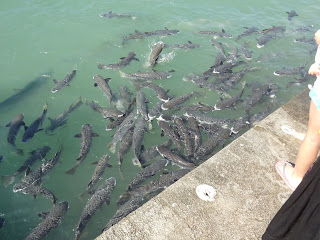 We move off to Kakadu on Sunday, where we’ll stay for 5 nights. I’m not sure what the internet access will be like, so it may be a while (or maybe not) before we’re back on line.
Posted by Cob and Oma at 9:59 PM