We spent a few days at Mt Isa catching up with friends whom we met last year (they got us out of a big problem). Would you believe that a man could live in South East Queensland for over 40 years and only once ever travel out of the northern state? Or that someone could reach that age never having travelled on a train, or a plane? Our friends have managed this, and yet remain one of the most well balanced and likeable couples imaginable. And, they own a Harley, so our three little travel mates (Harry, Nash, and Millie), plus Chook got to ride a Harley.


We did all the touristy things last year, so for this visit we just caught up with our friends plus did some cleaning and maintenance.
As we left the Isa, we entered into an interesting phase of the trip – firstly, we travelled 400 km across the Barkly Tablelands where we ‘free camped’ for the night. Out here, where it's 45 km to the nearest civilisation, it is really dark (make that really really really dark). Normally when in caravan parks you have mains electricity and thus even when the lights are turned off some light remains within the van ie; clock, microwave clock, radio screen. When the van is without mains power, after you turn off the battery power you need to walk around with your eyes closed so that you can see more! 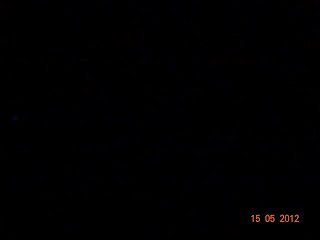 The next day we did 300km to stay at Banka Banka Station. This property also operates a somewhat basic campground where water, but not power is supplied. Then we did yet another 250km to a caravan parking spot behind a roadhouse, and finally another 220km to Mataranka and a proper formal caravan park. 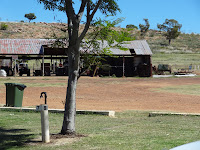 Banka Banka Station - about 75 km north of 3 Ways.
That is 1168 km without unhitching the van. But more importantly, the only towns (I think that’s what they may be called) we came across were Camooweal (189km from Mt Isa) which has a population of less than 200, and then the Aboriginal settlement of Elliott on the Stuart Highway. Every other named location, is simply a roadhouse selling fuel and cafe style food. Most have a simple camping area behind them.
Just before we got to Camooweal, we had to stop at some road works. The vehicle in front of us was a road train with 4 trailers. As we started off, he was quite slow in accelerating and I started up a radio chat with him. During the 9 km that it took him to get up to full speed, he told us that he normally only hauls three trailers, but had special approval on this job to have 4 so that he could carry 145 tonnes – think about that, 145 tonnes on a truck. A standard ‘B-Double’ has a max weight of 62 tonnes!
After crossing the Barkly, we stopped for fuel at Three Ways roadhouse. As we were leaving we spotted a road train driver ‘assembling’ his rig. First he hitched up the first trailer which is just like popping on a box trailer. The next bit is a little tricky because he needed to reverse the, now semi trailer onto what would become the second trailer – once that was in place it became really tricky because he had to reverse what was a 2 trailer road train back onto the third trailer. I’m pretty good at ‘turn left to go right’ reversing of a single trailer, but the go right to go left to go right bit for the 2nd one would beat me. But then he had to ‘go left to go right to go left to go right to go to bloody hell’ for the last one.
Somewhere on the road between Banka Banka and Dunmarra we came across 6 or 7 dead cattle. It was quite obvious that they were road kill, and had only died the night before. We weren’t able to stop, but we couldn’t see any bits of vehicle or metal lying around, and certainly no disabled truck. From this we can only surmise that a road train had run into a wandering herd and wiped them out – I wonder if he stopped?  Or given his weight if he even noticed?!?  We also came across a 6 or 7 foot Olive Python who was just slippin’ across the road. Unfortunately we couldn’t stop so no photo.
We stopped at the Daly Waters Pub as we did the last leg to Mataranka – well, ya just gotta, doncha?  This is one of Australia’s iconic outback pubs, with even more paraphernalia pinned to the ceiling and walls than most other iconic pubs. The pub is quite famous for the Barra & Beef meal they serve, together with the crowd that they pull each night – and all this while being so far from anywhere, that you need to go through nowhere via somewhere just to get there. The bloke across the road who flogs souvenirs reckons that he used to live in Wheelabarraback, just near Dijabringabeeralong, and over the hill from Crakatinnie. 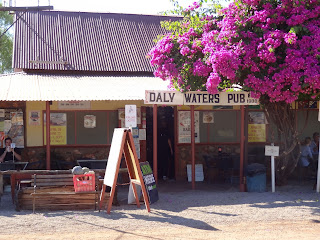 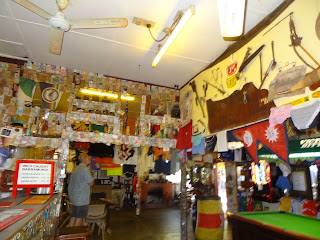 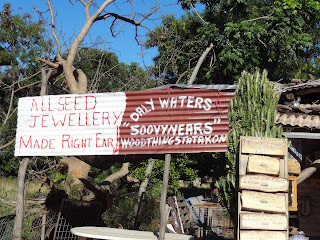 Okay, that’s all for this post – I’ve gotta get an early night, so we can have an early morning dip in the Thermal Pool, then duck up to watch the morning hand feeding of the Barramundi.
﻿
Posted by Cob and Oma at 11:12 PM