Sorry for the delay in publishing this post, but there isn't any internet access for over 1000 km once you leave Mt Isa.

Most family bathrooms can easily be compared to a battlefield where each user fights to control the space, and in doing so uses whatever ammunition comes to hand. It seems that females need to stow far more ammo and as any man may attest, this ammunition is quite devastating in its capacity to render them (the man) totally helpless. A quick survey among caravan husbands indicates that if they can conquer and hold 5% to 10% of available bathroom space they consider themselves a success. Those who hold more than 15%  are held to be heroes among their peers.
So it is within the ensuite of our van, I am allocated one small cupboard. Whenever this minute or miniscule allotment is raised, I am told that in reality all the other stuff is there just so that she will look good for me and that I should be grateful. I think that I have not only lost the battle but the entire war.....
As we traipse around the country we find that many country towns have a special place in the nation’s history. Barcaldine occupies a place that is as great as any; perhaps even greater than most.
In 1890-91 there was a major industrial dispute between graziers and shearers. The shearers went on strike and as the dispute developed, they gathered under a specific eucalyptus tree outside Barcaldine railway station. From this the Australian Labor Party was formed.
This tree, soon named ‘The Tree of Knowledge’, survived for 115 years before being poisoned by some $%#@&*.  From this heinous act an amazing monument has risen in the form of an artistic tree.

All the towns, villages, and properties (stations) use artesian bore water from depths varying up to 3000 metres.  It arrives at the surface under great pressure and at temperatures up to 99 degrees! Yep, the bore at an outer station is almost boiling at the bore head. At Blackall town bore it arrives 58 deg, and at Winton 83 deg.  It is then allowed to settle or cool in large tanks prior to reticulating it around town.  This process doesn’t improve the smell (sulphur) nor the taste.
Clearly the local men have found an alternative means to satisfy their thirst. Blackall’s 100 people share 3 pubs, Winton’s 980 good folk have 4 pubs!! And, Barcaldine wins with 1600 people and 5 pubs – until recently it had 6, and but a few years ago it had 7. 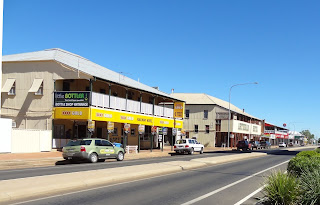 5 pubs within a football field length of the main street -

We were lucky enough to spend the Mayday weekend in Barcaldine (Barky). A community BBQ and foodfest on the first night was accompanied by a “Rev Fest” where ‘enhanced’ cars mostly of the 1970s (or earlier) paraded and then parked for inspection. Nostalgia ran rampant in many minds. 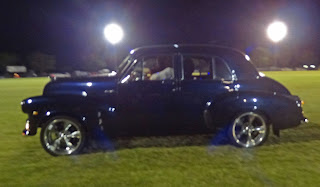 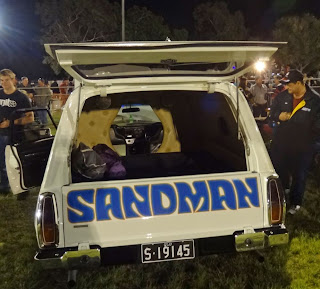 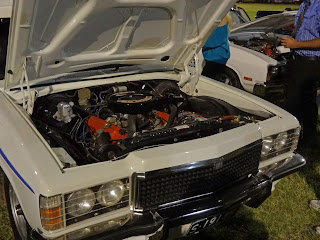 Earlier in the day, the local Rugby League comp featured the Barcaldine Sand Goannas against the Augathella Meat Ants – Barky won. Up here, the teams have far more innovative names than those in the big cities.
Monday was May day and the town had a street parade where I’m sure that the entire population, plus enough visitors to ensure that all motels, hotels, and caravan parks were full, turned out to watch. What a show of community spirit and effort it was. Every kid in town got into the show, including a mum who had converted a pram (with cardboard and imagination) into a simple parade float. 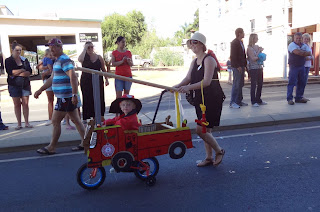 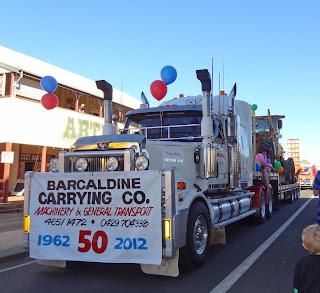 As a finale’ we donned our best outfits and attended the local races. We were not too sure what the dress code would be for such an occasion, so Shirl wore shoes rather than thongs, and I decided to go for my dressy black thongs and a shirt with all the buttons done up.
The race card showed 11 races, so a very busy day was planned. When we got there we discovered a buzz around the arena that “More Faster’s” track record may be under threat. This proved an accurate tip as in winning the Grand Final, Patches O’Halleran smashed the old record. 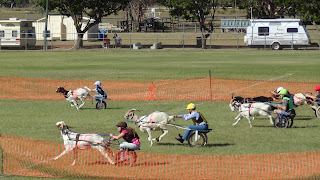 Note the unusual jockey style - grab the goat's tail and pull like mad. 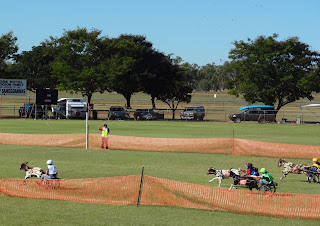 Patches O'Halleran wins.
By the Tuesday we knew that we had to move on – the hectic social life can only go on for so long before the body cries ‘enough!’.
In 1895 a young bloke by the name of Andrew Barton (Banjo) Patterson was visiting his sweetheart at the Dagworth station near Winton, when he heard a rendition of an old Scottish refrain. He was quite taken by the melody, and a few days later when he heard a story of sheep thief he put quill to parchment (I think I may have exaggerated that last bit).
Thus Waltzing Matilda was born.
The following week when the family were visiting Winton and staying at the North Gregory Hotel, Banjo was asked to sing the new song. Thus this pub was where the first public performance of Waltzing Matilda.
Whilst the pub still exists in name, the original building plus the later 2 were each consumed by flames. The current incarnation has another important piece of history. After the previous building burnt in 1946, the rubble remained as an eyesore until the town people lobbied the local council to do something – eventually the council themselves built the pub and thus became the first council in Australia to own and operate an hotel. Please note the change in my narrative from “Pub” to “Hotel” – a government council couldn’t own a simple grog shop, it had to be much further up the tower of elegance and so it was. It was sold into private hands in the late 80s after 32 years of council ownership, and while the elegance may be little tarnished, it remains a fine hotel. 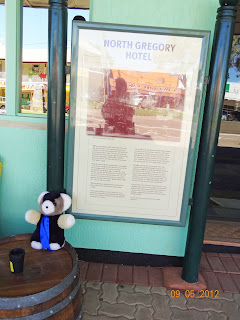 Winton also lays claim to one of the most unique musical instruments in the World. I know, that’s a very big boast, but where else has a musical fence. It really works. Each strand of the fence is tensioned differently and when a stick is used to hit or stroke the wires, music erupts forth. The percussion section is crafted from a range of  ........... well, junk. 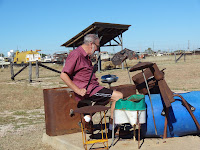 And the BEAT GOES ON! 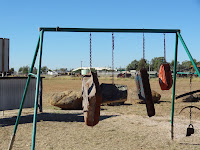 I think this is the String section? 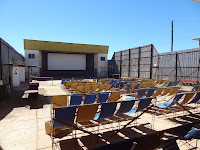 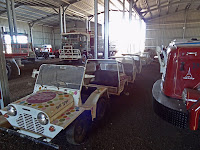 Note the 'Trailers' behind - The first passenger road train? 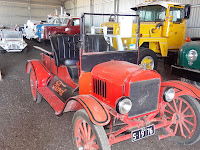 We spotted this at the local truck museum, and wondered about trading in the Landcruiser.

After two nights at Winton, we headed off to Boulia via the 360 km single sealed lane road. For those that don’t know about these roads, there is but a single 3 metre wide strip of bitumen and when another vehicle approaches, the most manoeuvrable pulls over onto the dirt verge. Everyone yields to road trains! 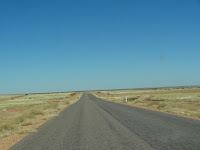 One of the more scenic pieces on the Boulia Rd (its only 3 metres wide)
To overtake another vehicle they have slightly wider sections every so often - - - mostly more ‘so’, than ‘often’. 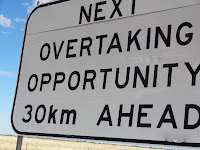 We paused for lunch at Middleton where the pub to people ratio is 1 pub to 3 people. 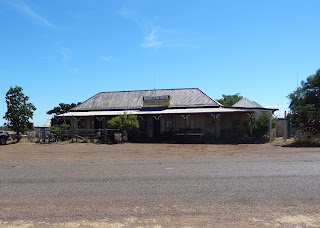 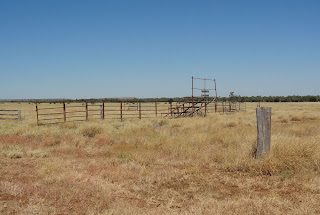 As you sit and sip your drink, you may look over at the local livestock centre
Boulia is; well it just is. Population 220, 1 pub, 1 butcher, 1 fuel outlet, 2 shops, and a nice caravan park. Because of the isolation there is almost zero light after sunset thus the sky is simply magnificent. We have never seen, nor even imagined there could be so many stars, or that they could be so clear.
Since we left Miles some 1800 km ago, we think (because we have lost count a few times) that we have passed well over 1000 dead kangaroos plus a number of pigs. Many are in the process of being torn apart by crows and/or birds of prey. Interesting that most birds fly away as you approach, but crows have a wonderful arrogance in that they wait until the last moment and then just walk the minimum number of steps needed to allow the car through. This held true until on the road to Mt Isa where we came across a flock? Of eagles busily ripping apart a carcass. Some flew lazily off, but one had the effrontery to stare us down until we had stopped. Once we had taken his photo, he calmly spread his wings, flapped twice and majestically lifted upwards. 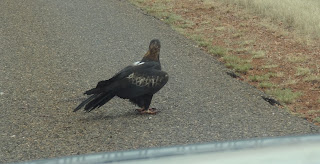 We are now in Mt Isa and leave on Tuesday for the Barkly Tableland and places northward.
Posted by Cob and Oma at 4:11 PM