Our stay at Broken Head was quite idyllic as the caravan park was set into a temperate rainforest and faced directly onto a magnificent 7km beach. Neither Shirl nor I are surfers, but even our non expert eyes could tell that it was a surfing ‘hot spot’. Each day the car park near the caravan park entrance was filled from dawn to dusk. We were somewhat bemused by the preponderance of bald and/or grey heads among the board riders. Age and experience had clearly drawn them to this spot – or maybe it was the other 50% who were wearing bikinis. 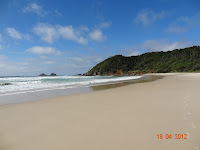 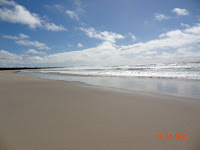 Just 7km up the road at Byron Bay, the bikinis outnumbered all others combined. I’m sure that the average age would struggle to go over 25. 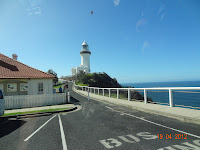 On the headland overlooking Byron is one of the most impressive lighthouses that you can imagine. When standing at this point, you are on the most easterly place in Australia. While this may be impressive geographically, it doesn’t match the impressive view – drop dead gorgeous, or even better than that! 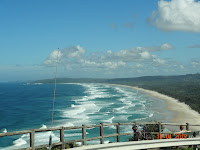 If you go further  East than this, you get wet.

The last few days were somewhat wet with heavy rain each night, followed by scattered showers each day.  This didn’t stop my daily beach walks, but it did reduce the number of board riders. Only the most intrepid braved the much bigger waves. 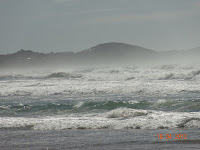 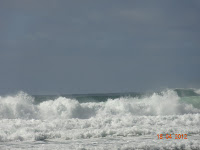 After a week of this life we moved north to Brisbane where we parked on the nature strip outside our son (and daughter in law) house.
What a busy time. Every day was filled with things to do. Firstly a night out at “Outback Australia” (Gold Coast), then the A League Premiership soccer (ok, football for the purists) Grand Final the next evening.  Shopping, grand kid’s footy matches and other stuff.  And, sitting over all this was the joy of working with Gael to build her a new workbench. It is truly a work of great art! 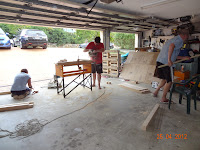 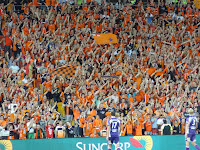 A Grand Final Crowd.
Note the use of safety boots!


Sunday the 29th and we were on the road again. Up the climb from just north of Brisbane to Yarraman then eventually to the town of Miles, we booked into “Possum Park” for a night. This place is set in 350 acres of natural bush which has 20 or so former World War 11 ammunition bunkers some having been converted to cabins. The nature aspects were highlighted whilst we were sitting around a campfire; a possum calmly wandered in, paused to look at the fire, and walked off.
Beyond Miles the countryside is relatively flat with just a series of ‘jump ups’ where the land undulates with low rises every few kilometres. Initially the vista is of wide open cropland with short sections of scrub. Beyond Muckadilla the mulga and Brigalow scrub becomes the standard with short grazing sections. Of interest was that the dreaded Prickly Pear was spotted this far out. As we pushed further west we expected to strike a more sparse country, but instead found the final 120 – 150 km to Charleville was all thick scrub. 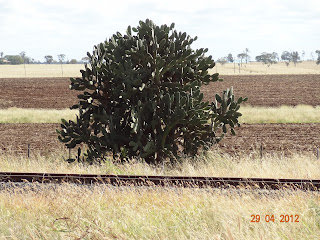 
Beyond the small town of Mitchell we came across numerous ‘Triple Road-Trains’. Initially we tensed up a little when one of these monsters approached, but after the first dozen or so they were nothing more than another truck – albeit, a very long one.
Of greater difficulty were the kangaroos – road-kill roos. Clearly the nightly truck traffic has an impact (pun intended) among the roo population. We stopped counting well over 100 (plus a few pigs).  Many of these carcases are lying right in the middle of the road such that you must veer onto the opposite side of the road to get around them. Murphy’s Law says that this is the exact moment another truck will be approaching – bugger.
Now at Charleville.
Posted by Cob and Oma at 10:02 PM