Well, it has finally happened. We are on our way to another adventure.
This time we are heading north to Brisbane, then turning inland through outback Queensland and onward and upward to Darwin. Following some time exploring Kakadu and Katherine we will push westward to Broome, thence follow the West Australian coast down through places such as Port Hedland, Exmouth (Ningaloo Reef), Carnarvon, Monkey Mia, to Perth.
We’ve been at home for four months and thoroughly enjoyed – no, revelled in – the family contact.  It is amazing how much we miss the regular interaction with the family – it must be hell for folks who live in far off places and away from their family.
The last month seemed to be racing forward, whilst we simultaneously tried to control a whirlwind of activity preparing the van and Landcruiser for our trip. Sitting over the top of this, we engaged in an endless series of social parties and BBQ’s.
Finally, eventually, at long last, we hitched up the van on 30th March and set off for Sydney. Three more days of social engagement found us totally exhausted, and as much as we care for all our relatives, we were somewhat pleased to head north to Gloucester (with a pleasant mid trip coffee stop shared with my brother and his family).
Gloucester is a small town of about 2500 people, and located at the base of the Barrington Tops high plateau. This high country consists of wild and rugged gorges and ranges, and as we were surprised to find, is apart from the Alps the highest plateau in Australia. We spent a full day exploring the tops, and can easily confirm just how rugged and awesomely magnificent they are.

View from the Tops

The town of Gloucester is quite typical of mountain towns/villages with a strong focus on local community – you don’t see many big city butcher shops advertising that they will kill and dress your own beasts!  I offered them our neighbours dog, but couldn’t arrive at a $$$ value.
Fascinated to see that they have their own version of a triathlon – with no large waterway suitable for the swimming leg, they have replaced it with a kayaking section down one of the rapid rock strewn local mountain streams. Likewise, they are a bit short of flat country for the run leg, so they have the competitors run up a mountain, then ride down it (via a few really big uphill diversions) – tough folk these mountain people.
Friday 6th April and we were again on the road – this time to the beach side town of Nambucca Heads. Our caravan park is set on a headland above what seems an endless beach and beside a beautiful river estuary.

Not too far inland from Nambucca is the village of Taylors Arm – this is the site of the original ‘Pub with no beer’ referred to in the famous song by Slim Dusty. The song relates to a time in the 1950’s when floods had cut the access road, and thus it was interesting that when we attempted to head up there, the road was cut due to a landslide from recent floods – our four wheel drive ensured that we got through.
Lunch at the pub was really good – far better menu than we expected. In keeping with the ‘Pub with no beer’ theme, Shirl had a Lemon, Lime & Bitters, and I had a Tooheys. 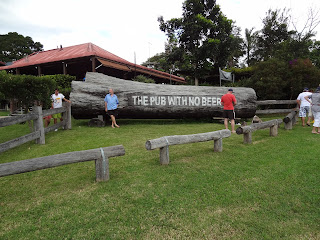 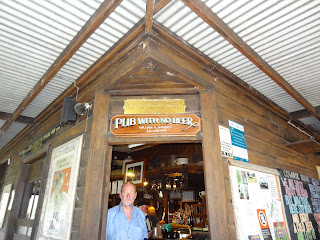 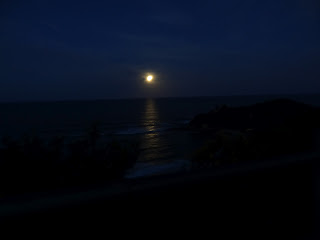 Those who read our blog of October 2011 may recall that we had an issue with shower gels. We have again experienced such a dilemma where, at Woolworths we were faced with a cornucopia of exotic options and confusion. We finally decided to go for the Mango and Grapefruit after seriously considering Egyptian Violet and Elkmi. We were simply too scared to take the giant step into Egyptian Violet – Australian, English or French would’ve been okay, but we’re not quite ready for, well, something so wild and esoteric as Egyptian (lol).
Off to Broken Head tomorrow – not really a village, but a camp area about halfway between Ballina and Byron Bay.
This post is quite late.....yes, I know, but I can’t do anything about an almost total lack of internet access at Nambucca and Broken Head. Sorry.
Posted by Cob and Oma at 10:06 PM