I was going to post an update a few days ago, but decided that the end of our stay in Northern Territory, was a nice demarcation point.
We have been run off our feet since our last post. Alice Springs has so much to do, and it’s all great. For us it started on our second day (1st day was washing day, and cleaning day, and checking out the local tourist office), when we went to what must be one of the most entertaining fun filled days that we can remember. The Henley-on-Todd Regatta has been an iconic Alice event for 50 years and consists of boat races in the dry river bed!  It isn’t just one race, but an entire day of races and entertainment.
It starts with a street parade, and soon gets into ‘the events’ which are held on a section of the dry river bed (about the size of a half footy field). Rules are simple – first aim is to win, second aim is to do so while cheating: not just underhanded cheating, but blatant open and most definitely funny cheating. They have singles, doubles, 4s, 6s, 8s, and and and, well whatever.  Another funny one is a race to shovel river sand into a 44 gallon drum and this seen a number of strategies of how best to do this – do you shovel the area on one side of the drum until bare, or perhaps just dance around the drum in ever widening circles? The answer is easy – the best cheat wins. 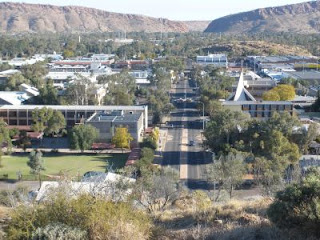 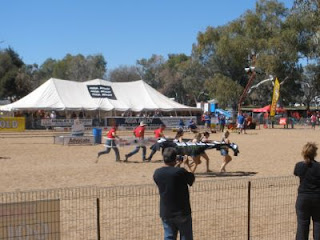 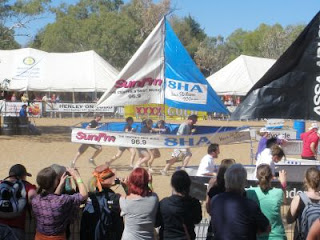 Todd Cup without the winged keel 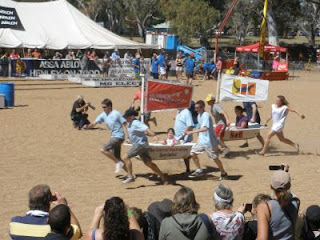 Bathtub Races for the unclean 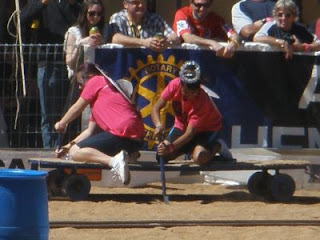 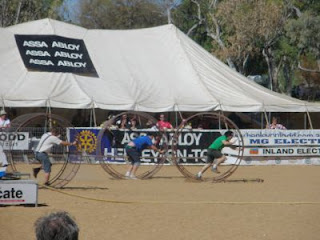 Tour d'Todd
While all the races are happening, there is an ongoing “war” between the Navy, the Pirates, and the Vikings which were everybody’s favourites because how could you not love a heap of Vikings in bright flouro bear skins. 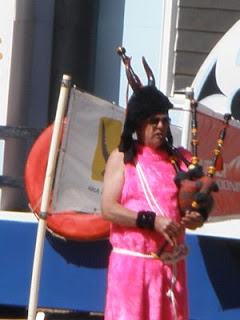 Are you scared - you should be. 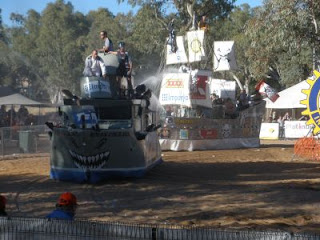 The Final Battle
The next day we visited the Desert Park, an absolutely fantastic place where three distinct areas are set up as a sand desert, a woodland desert, and a ....... desert.  As you wander around each, you see the various ways that plants and animals survive in these harsh climates. To top it all off there is a nocturnal animal house which really shows all the fauna moving and hunting.  I can assure you that I’m not going to be walking around too many bushy areas at night any more after seeing just how many snakes and nasties are lurking.
Tuesday to Thursday we spent exploring the West Macdonald ranges and we were totally overwhelmed at the stunning and diverse scenery. Places such as Simpson’s gap, Standley Chasm (I think I may have finally succeeded in getting Shirl to call it Casm, rather than Ch...asm), Ormiston Gorge, Ellery Big Hole, and Redbank  Gap were all that we have heard of them. The last of these was the only one where we really needed to climb and clamber over bad terrain, and here it became progressively more difficult as the boulders became bigger, and the river sand deeper. Perseverance won the day as we stood looking at a true gem. 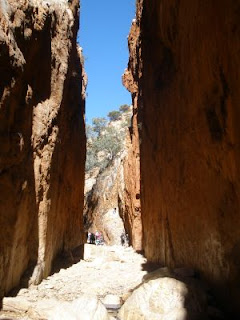 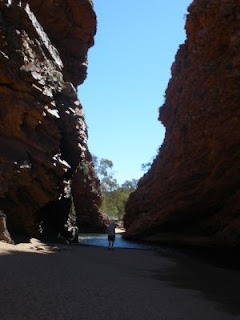 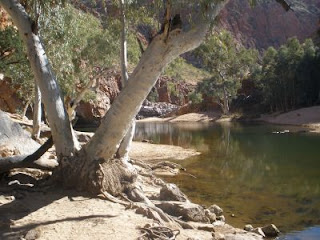 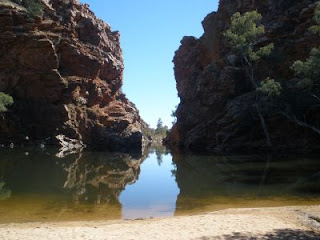 Ellery Big Hole
Shirl visited the Pioneer Women’s Hall of Fame and spent quite some time. I queried her as to why such a place was located at the former gaol: I expect the bruises to fade within a few days.
Meanwhile I visited the Reptile Centre which I found to be one of the better ones that I have been to. A note at the entrance warns visitors to beware of “Frank”, who is a Spencers Monitor (Goanna) and is free to walk around where he pleases – a 600mm Goanna can, in my opinion go wherever he pleases.  At the conclusion of the visit, you can cuddle a 9 foot Olive Python, and give Frank a cuddle as well.
We headed off for the 477 km run to Kings Canyon on Sunday, and decided to fill up at Erldunda - $1.89 per litre. The country side was a shock as we were expecting to see sparse vegetated red desert, but found the opposite. Sure, the soil is red (everything is), but the land has a good supply of trees and shrubs plus lots of grass. Once more we were delighted with the sheer number of eagles, kites, and other raptors and I doubt a kilometre goes by without seeing a few.
Kings Canyon is brilliant – there, I’ve got that off my chest. We had a look at the rough stone steps going up to the top and chose to do the valley walk. I didn’t know that they could build steps so high! Once in the canyon, the cliffs just seem to go up forever, and it seems odd to be surrounded by lush forest growth when you know that just out ‘there’ it is dry inland stuff. 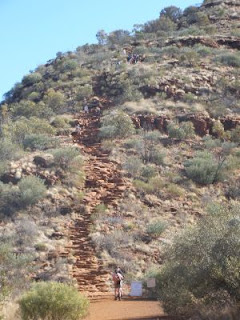 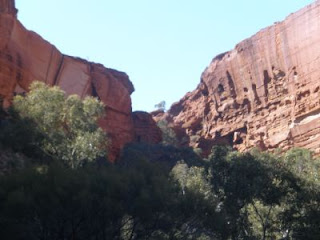 The Head of the Canyon
We were so taken with it, Shirl (after lots of too,ing and fro,ing) decided that she wanted to do a helicopter flight. As we booked in and waited, the nerves were clearly in action, however they held up and we embarked on an amazing flight over the canyon (a number of circuits), and a number of other geographic features. It turned out that the other two guys on board had booked a half hour flight (we had opted for the 15 minute flight), and rather than send the chopper up with two empty seats, the put us on the longer flight. Just shows that the good guys win! 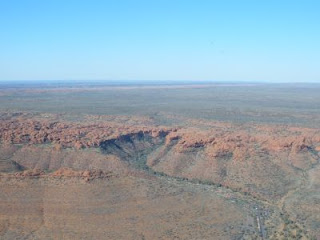 Wow!  Look where we are. 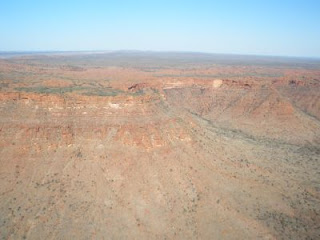 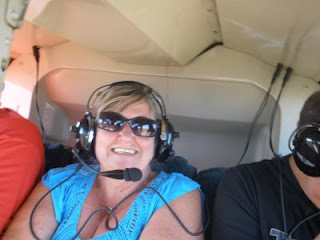 Pilot to Co-Pilot,  are we there yet?
Each night the caravan park had a few dingos prowling around and this caused a tad of excitement among the foreign tourists. On our way from Kings Canyon to Ularu we spotted a wild camel, but before we could stop the van and get the camera out, it had moved further into the bush, thus only a pretty poor photo.  Further on we stopped near a roadhouse to stretch our legs when an emu came over to check us out. He came right to the van and pecked all around it, then tried to put his head in my window. 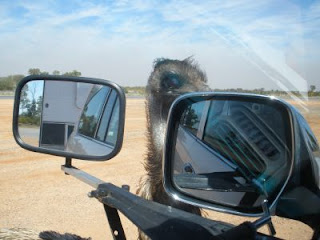 Filled up with fuel at $2.19 per litre  &*%$#$@#$, and moved onward to Ularu where we booked into the Yulara Resort Caravan Park. When you first catch a glimpse of the rock in the distance, it’s quite odd how a tingle runs through your body. After booking in, we set off for the 15km drive to the monster, and once more it is weird that the same feelings occur. The sheer size is overwhelming, and the colour is really red.   The true colour of the rock is a bluey grey, but the iron oxide leeches from the rocks, and once wet, it rusts – thus it should be called the “Rusty Guts” not the “Red Centre”.  We went for a walk each day, including a guided one which opened our eyes to so many things that you just wouldn’t see on your own – and it was free. Another was through the Olgas (Kata Tjuta) which proved to be almost as good as Ularu. Each evening we went to different spots and sat with beer/wine/G&T and watched the sun set over the rock. 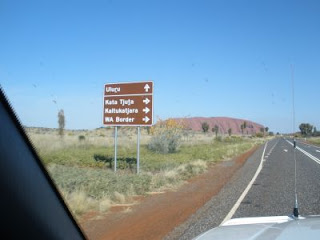 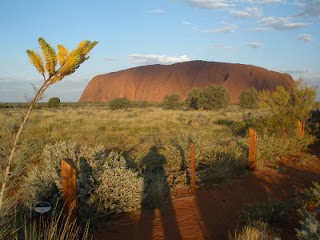 The Sun about to set 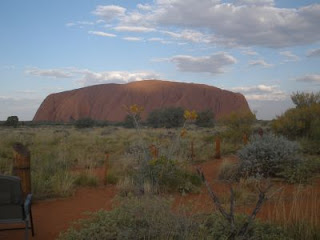 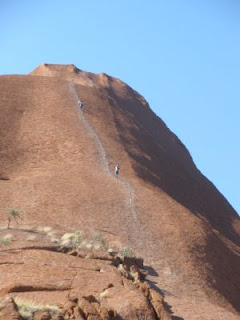 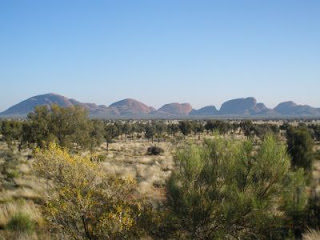 Kata Tjuta (Olgas) from a distance 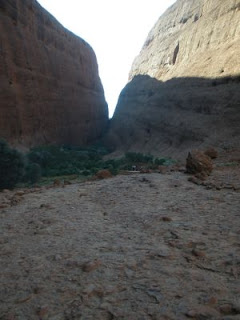 The Kata Tjuta walk that we did
Our visit to Ularu, Kata Tjuta, and Kings Canyon have been absolutely outstanding and totally different than we’d imagined. Truly one of Australia’s most memorable areas.
As we drove out the wildflowers were on full display. We had noticed them before, but travelling back across roads that we had used just 6 days before showed just how perfect our timing had been. Where, on the way in we had needed to stop to get a photo of a Honey Grevillia, now there were large areas full of these most picturesque plants. Elsewhere there was a carpet of yellow mallee wattle, with roadside tabledrains a flood of pink, blue, or steel grey flowers. As we moved onto the Stuart Highway, there were broad acres of the red Sturts Desert Pea. Couple all this colour with the dual background of multiple shades of green to grey/green foliage, on a palette of red earth and you have a garden effect to challenge anywhere.
We stopped last night 20 km north of the SA border at a roadhouse and caravan park called Kulgera. This place is one of the numerous locations that claim to be the true “centre” and bases its claim on being tne centre of Australia’s Gravity – if Australia was weighed, and then balanced on a pivot, it would need to be placed just to the east of Kulgera in order to be balanced.  The young bloke behind the counter was a pommy backpacker. When he gets home, I bet his mates aren’t going to believe where he worked and how far it is/was from anywhere. From Kulgera to anywhere is 200km, and when you get to there, you’re still nowhere.  Given the distances you need travel from either north or south, it is a popular ‘1 night’ stopover point; and that includes the road trains. We had 7 of them parked out front as their drivers got a bit of sleep.
When we awoke, the wind had also arrived and thus we set off into a headwind, accepting that the day was going to be (a) expensive as our fuel consumption would suffer, (b) a difficult drive.  This was true for the first 100 km, but then the wind moved to the side – this is far worse as the van cops a beating – bugger. Along the way we passed the Road Trains having lunch, but 30 minutes later they caught us and each took their turn passing. I am now accredited at being overtaken by 53 metres of swaying trailer.
We arrived at Coober Pedy this afternoon and are amazed at the landscape – millions of small (1 mtr high to 4 mtr high) mounds of earth where opal miners have dug shafts. It looks quite bizarre.  Not sure how long we’ll stay.
Posted by Cob and Oma at 4:36 PM