I’ll bet the above heading has you all grabbing for your aussie atlas. Be patient, and we’ll get to it.
Coober Pedy is somewhat of an enigma in that first impressions are not too good but before long, they do grow on you.  There are limited supermarkets (an IGA and a ‘no name’), only one bank (which says a lot about the pathological financial secrecy of the citizens), and very limited other typical town type shops.  This weakness is more than made up by the unending supply of opal cutting and trading shops, all of which Shirl tried to visit.
We decided to take a town tour which proved to be an absolute winner – without it, we’d still be wandering around trying to work out how the place operates. The real deal opal fields were the first place we visited and it was amazing: just the place to film a movie about the end of the World. 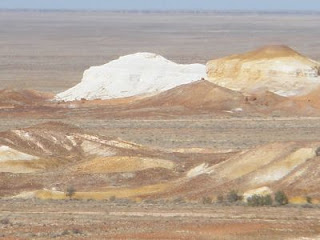 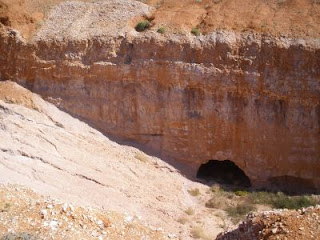 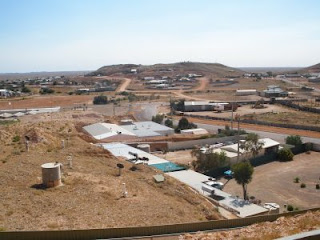 Dug-Out business and homes.
There are warning signs everywhere you go both in town and around it.  The local saying is that if you see a mound of dirt, there will be a mine shaft behind it, and if you don’t see a mound, there will most likely be a shaft there.  Given the temperature range at Coober, it shouldn’t be a surprise to find that more than 65% of homes are underground (locals call them dug-outs).  They range from the small 2 bedroom model, up to at least one which is over 80 squares in size.  They are really quite practical in that if you have an addition to the family, just grab your tools and dig out another bedroom. And best of all, nil heating or cooling costs as they remain at a constant 23 to 25 degrees.

Even the churches are dug-outs, with the Serbian church being the standout winner as the most impressive. All machine dug and completed within 2 weeks. 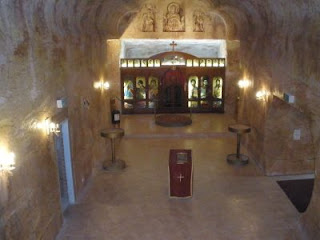 Serbian Church
With the nature of the country, sport can be a bit problematical as their golf course shows. It should be noted that the Coober Pedy golf Club is the only one in the world that has reciprocal rights with the famous St Andrews of Scotland. Think about that:  for the cost of an annual membership at Coober Pedy ($100) you can play lots of games at St Andrews!!!!!. 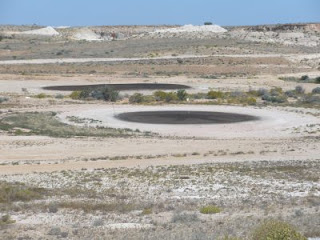 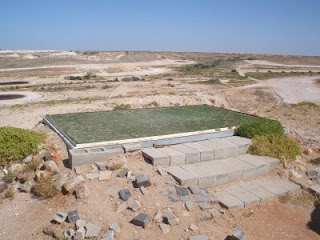 A Tee  -  not all are this flat, some are elevated.
The second tour that we did was the 577km day trip with ‘the Oodnadatta Mailman’. He does this 12 hour trip twice per week and takes 13 passengers in his 4x4 OKA bus and tows a heavy trailer behind. It should be noted that apart from the main street of Oodnadatta & William Creek, which total less than 1 km, it is all on gravel roads: 500km of this is corrugated.  Along the way he (Peter Rowe)  goes through the famous dingo fence (longest fence in the World), and also pops into various properties to deliver the mail. It’s quite funny to watch all the passengers run for, and then line up for the toot at each of these stops. Lunch is taken at the thriving metropolis of Oodnadatta where you have the chance to try the famous Oodnaburger. Neither of us tried it, so we can’t say what was in it, or how it tasted. However, we can report that the evening meals at William Creek Pub was great – a menu and cuisine that wouldn’t be out of place at a quality city restaurant, and this is served up at one of Australia’s most remote pubs. Between these two meal stops we dropped into a number of properties, including Anna Creek; Australia’s largest property at 24,000 square kilometres and running 18,000 cattle. We expected to find a large mansion there, but instead found an old stone home of far less generous proportions. 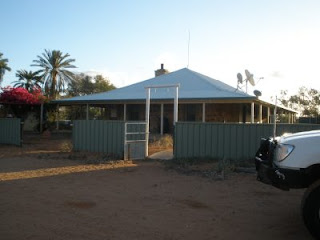 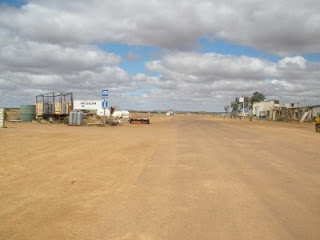 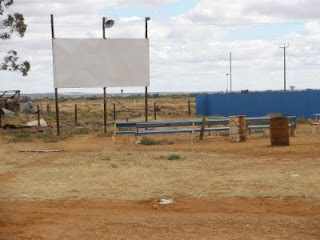 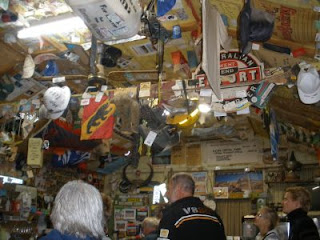 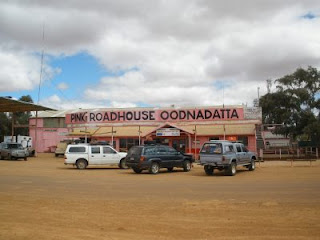 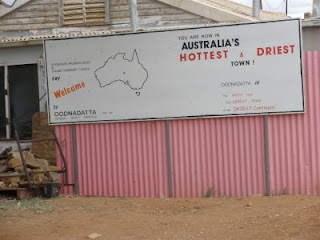 A fair boast (enlarge the photo)
A few days before leaving Coober Pedy the wind arrived, and despite our hopes, retained its vigour beyond our departure. Pushing into the wind really hurt our fuel consumption despite dropping the speed down below 80 kph.  Luckily we had only planned a short run to Woomera so the slow speed wasn’t important.
The next day we moved on to Port Augusta where we were able to replenish the pantry and fridge, and get to see reasonable diesel prices. A couple of amusing signs adorn the exit roads from Port A – if you head west, about a km out of the CBD is the junction of the Eyre & Stuart highways where the big green sign reads:  “Darwin: Northern Territory” and “Perth: Western Australia”.  Meanwhile if you head south, you come to a sign reading “Sydney: via Broken Hill”. Surely this must make Port Augusta the ultimate intersection?
We are now at the very heel of the Yorke Peninsula in the very small town of Edithburgh and camped right on the water facing the Gulf of St Vincent. I’ll leave the report of our trip from Port Augusta to here for our next post.
﻿
Posted by Cob and Oma at 11:14 PM