South Australia seems to be undergoing a housing explosion, and not just small workers cottages, but quite large McMansions.  The extent of this boom became very evident when we arrived at Wallaroo. Here is a town of approx 2500 good folk and now has a large marina and canal estate with the accompanying extended housing area which is full of large McMansions that would enhance the best new suburbs of our larger cities. Clearly the obvious question is “Who the hell has bought these”. 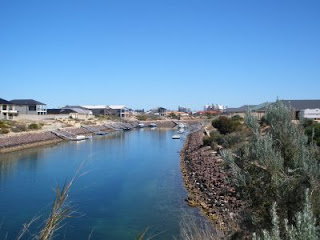 Wallaroo, Kadina & Moonta are known as the copper triangle or “Copper Coast” because in the 1860s that precious metal was discovered on a property where Kadina now stands. Wallaroo was created as a shipping port and was, for some 60 years, Sth Aust 2nd largest port. Soon after, a second mine was established at Moonta thus for a while, making the area the World’s largest copper supplier.
What remains are three towns just 12 km from each other, and each full of old stone buildings both commercial and housing, that are just so picture perfect. 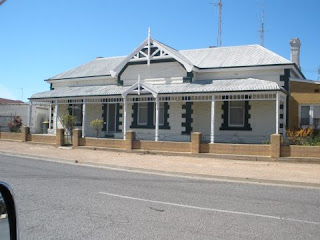 While the Copper Coast was magic to look at, it did have a significant weakness – the bloody weather.  What happened to Spring? Why was the wind so constantly blowing from the Antarctic?  For the first time in 12 months I had to wear long trousers.
After four quite busy days, we hitched up and moved 160km further south to Edithburgh at the ‘heel’ of Yorke Peninsular. Here we had a thriving metropolis of 400 people in a quaint little historic port town that was once one of Australia’s largest grain exporters. It’s once great jetty is now used by fisherfolk.  It proved to be an almost ideal base for us to explore this now quiet and interesting peninsular. While at Edithburgh we took the opportunity to do the 80km trip across to the Innes National Park located on the ‘toe’ of the Yorke.  We found an absolute gem. There is only one small community at Marion Bay, and then an awesome coast with wild seas, great cliffs, shipwrecks, amazing wildflowers, and so many baby emus that we lost count. Once more we discovered a lost industry. 90% of Australia’s gypsum used to be mined around Marion Bay, but the plunder is now completed and nature is recapturing it for itself.  And, yes, we also found a new plush housing estate on the Marion headland with homes of great size and splendour – who buys these things? 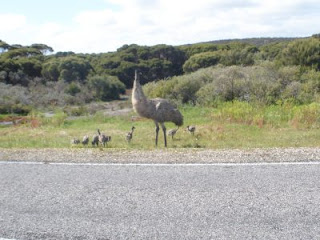 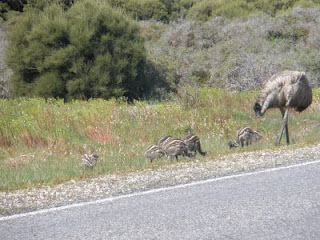 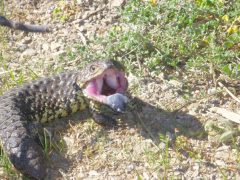 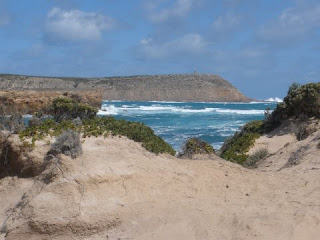 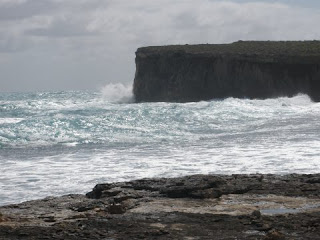 After 9 days on the peninsula, we hitched up and moved across to the south of Adelaide. It seems odd that it is only 50km across the water of the Spencers Gulf, but 280km by road. Initially the road was fairly bumpy and undulating making things a bit slow, but after we went around the top and headed south, things changed to ‘great’. Flat, straight, wide, all the way into Adelaide.
Our park is located right on Christies Beach about 25 km south of the CBD, but only 2km from a huge shopping mall (and 10km from McLaren Vale wineries).
We went to the movies on our first day here, and seen “Cowboys and Aliens” which was quite enjoyable – never gonna win any awards, but great light entertainment. Day two was washing day for Shirl, while I took ‘Tom’ Cruiser up to the local Toyota dealer for a service.
On the Saturday, we travelled down to Goolwa which is where the Murray River joins the sea. What a great little town (and new large, expensive housing estate) with lots of old buildings and a long history.  A few years ago there was a long series of court actions aimed at preventing a bridge being built across to Hindmarsh Island, and thus impinging upon the site of “secret women’s business” for the local indigenous population. The bridge was eventually built, and if there were any such sites, they would now be buried under ...... you guessed it, a huge – make that bloody huge – marina and canal estate that, judging by the size of the boats, and the brands of the cars, is a long way from a working class area. 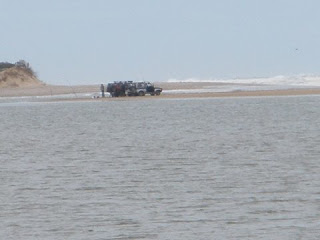 Murray Mouth - behind the 4x4s (bet they'll have a rust problem) 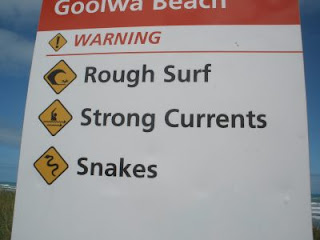 I guess they don't want people to go to the beach!
It was really special to stand about 150 metres away on the area directly opposite the mouth of the Murray and watch the waves break on the beach, followed by the water surging in and out the mouth. A feeling of awe overcame us as we looked at what was the final fling of this great waterway, as it completed its journey from the slopes of Mt Kosciusko. Although if you sought to trace the waters greatest length, you would find that you needed to go to far off Queensland.
After we returned to town and had a bite to eat, we followed the other bank of the river down to the barrages which are 8 km upstream from the mouth. These are really fascinating in how they are used to stop the salt water flowing upriver.  In the 1930s, after 100 years of agriculture along the Murray, the flow at the mouth had dropped such that salt water now spread some 250 kilometres upstream and made the river useless for farming. Thus a solution was needed. The barrages are really a very low dam across the river that holds the fresh water at just a small, tiny, wee bit above sea level, and as either salt or fresh rises or falls, they add or remove big concrete panels to keep it just right. It’s ironic that the solution fixed the squeaky wheel, and allowed even greater plunder of the river’s resources such that even after the floods of the last two years, only 27% of the water reaches the mouth. 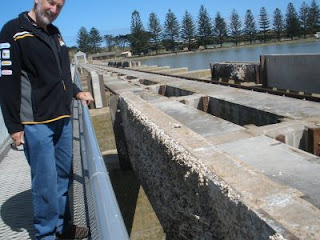 Standing on a Barrage in the middle of the Murray - this is one of the concrete blocks they drop into the barrage (see slot behind it.)
Next stop was Victor Harbour where we had hoped to go for a ride on the horse drawn tram along the 600 metre wooden causeway to Granite Island. However, it was out of use while they were doing some major upgrade works – bugger.  Not to be beaten, we went to the whale museum instead.
Yet again we were totally discombobulated by the plethora of new expensive homes being built.  We know why the Queenslanders are having trouble finding tradesmen to rebuild things after the floods and cyclones – they’re all in South Oz building great big McMansions around Marinas!
As we drove ‘home’ via the long scenic route that included Cape Jervois, we commented that the Fleurieu Peninsula is indeed, a damn fine bit of beautiful country.
Sunday. What can you do to keep yourself entertained on a Sunday?  Well, if you’re only 10km away from McLaren Vale wine district, you could go there. So we did.
Great wines, great lunch: all round great day.
Yesterday, Monday was our “Adelaide” day where we drove into town via a convoluted criss-cross route. The homes in the older suburbs are truly magnificent with their stone walls and slate roofs. Rather than knock ‘em down and rebuild a modern disaster, they have retained and maintained whole suburbs of these glorious homes. And, when you go to the old working class suburbs, you find the same approach. Street after street of stone built cottages, and each of them in good knick.
Another glorious feature in Adelaide (actually all of South Aust), is the vast number of 100 year old stone pubs. Everyone one of them would be a great place to have a beer, or four. Perhaps one of the better examples is found at Largs Pier – see photo. 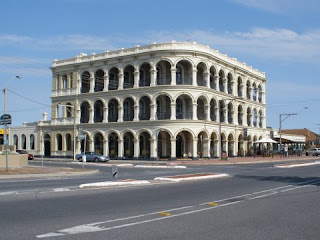 Largs Pier Pub
Posted by Cob and Oma at 9:58 PM