As promised, it’s been some time since I updated our travels. We’ve gone from Charters Towers to Alice Springs in 18 days, and with lots of fun and excitement along the way.
Perhaps the most interesting thing for us has been that the entire trip has been through country that is entirely different than what we’d imagined. Where we expected almost desert like terrain, we found scrub filled rolling hills, and where we thought we’d be rolling along flat featureless plains, we were in chain after chain of ranges.
After leaving Charters we entered the dinosaur belt. Did you know that the large triangle of country bounded by Hughenden, Richmond and Winton is lauded around the World as one of the great dinosaur centres? It is. Way back when Australia had an inland sea (called Eromanga), Hughenden was on one bank, Richmond in the middle, and Winton in the shallows. For some 40 odd years, fossils have been popping up all around the area, with almost every farmer/grazier/pastoralist fully aware that the next time his shovel or plough hits something; it may well be another great piece of history. Both Hughenden and Richmond have very good museums with real skeletons of dinosaurs and really large fossils. 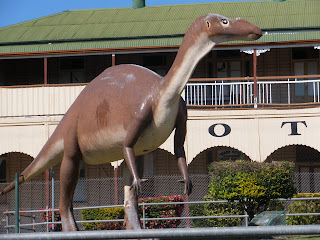 I'd hate to walk out of the Hughenden pub with a few beers too many. 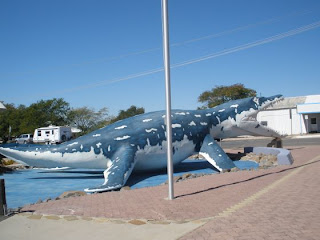 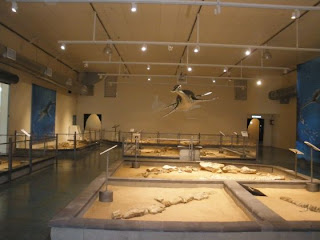 Inside Richmond Museum
After immersing ourselves in ancient history, it was good to move forward to recent stuff at Cloncurry. John Flynn was the father of the Royal Flying Doctor Service (RFDS), and subsequently the School of the Air – not a bad CV. Cloncurry was where all this took place, as well as it being the landing place of the first Qantas flight. The juxtaposition of this item and the RFDS are not unrelated as Flynn witnessed what Qantas did, and his lateral thinking went into overdrive.
Along this section of the road was where we first encountered our first road trains: all 53+ metres and 120 tonnes of them. They come in all sorts of combinations such as the common 3 trailers, or the 2 trailers and a B-Double, or a B-Double with 2 trailers behind, or 2 B-Doubles.  And once you cross into the Northern Territory you find that they hook 3 B-Doubles together. 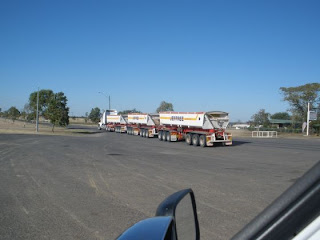 After 4 nights in Mt Isa, we were getting ready to leave when we had a little mishap – to be honest; it was a bloody big stuff up.  When rolling the awning up, we decided to clean it and the only way that I could reach it was to drop the tailgate of the Cruiser to use as a platform. All went well until the last section, when Shirl went inside the van, and in my impatience, I decided (spur of the moment thing) to reverse up without her guidance – jumped in the car, didn’t remove thongs, open door and lean out looking backwards, foot slips out of thong, off brake onto accelerator and BANG. Into side of van goes the tailgate and breaks van door plus tailgate.
The park owner gave us the name of the local van repair guy who comes around and repairs door – insurance says that they will consider it a temp ‘make safe’ repair until we get back home. We checked with local panel beaters and find that they can’t get a new tailgate for 4 to 6 weeks – bugger. Further checking reveals that there are nil, none, nought second hand tailgates in Mt Isa, and the panel beaters are not prepared to ‘chase’ one down through Darwin etc – double bugger.  However, a saving angel appeared in the guise of the guy on the adjoining site. Their son works at a Toyota dealer near Brisbane, and could source a good unit down there. Even better was that he was about to drive up to Mt Isa (to see his new nephew) in two days time. This guy is our new hero. The end result was that we did the deal and our new second hand tailgate, which the insurance people agreed would also be regarded as a temp ‘make safe’ until we get home, arrived and was fitted.
Thus we ended up staying in Mt Isa for 11 nights rather than the original plan of 5 nights and this gave us the opportunity to go to the Mt Isa Rodeo which is reputed to be the biggest in the country. It was funny to go to an event where everyone wore cowboy hats, jeans, country shirts, and riding boots. The blokes wore similar. The award for “Mr Kool” goes to the bloke in the Steer Wresting who came out of the gate at a zillion kph, jumped from his horse onto the back of the racing steer, slid up along the animals back until he could grab the horns, dropped down as he twisted the beast’s head until both were on the ground, then manhandled the horns until the steer was upside down while the bloke tied it’s legs together. Not so special you think? They all do that. But how many do it without dislodging their hat, and whilst wearing their designer sunnies? (sorry, no photo) 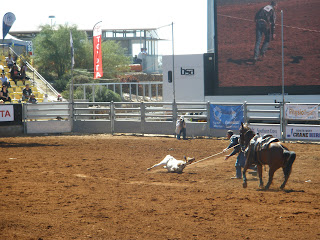 Note that the horse does most of the work. 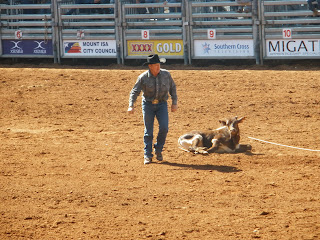 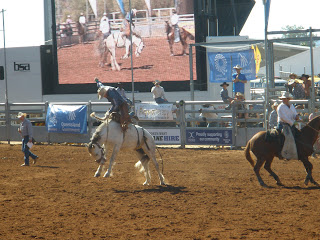 We also did an underground mine tour which opened our eyes to the noise down there. Huge machines do most of the work these days, and as each section is worked out, they just ‘bury’ these monsters because it’s cheaper to buy a new one, than dismantle and recover the old.
The future for the mine appears to be interesting – they are currently working on the business plan that they will gradually close the underground workings down over the next six years, and replace it with the World’s biggest superpit at 16 km long and ??? deep.  The smelter is already being shut down. I guess that eventually they’ll dig deep enough to find a lot of old buried scrap metal!
The transit from QLD to NT is “interesting” but only if you like 630 km of almost straight road (one section went 63 km without even a hint of a bend). The vegetation changed every once in a while, but soon went back to one of the earlier 2 or 3 types that had passed before. We stopped at Camooweal for the night, and after parking the van we went for a walk around the town – this took about 5 minutes. Night out here on the Barkly is dark – very dark. I understand that the locals walk around with their eyes closed because they can see better that way. 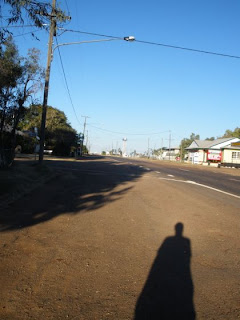 Other than Camooweal, the only other sign of habitation in all that distance is the pub and roadhouse at Barkly Tableland. Diesel is $2:20 per litre so we didn’t stop. However, we should be fair and admit that once past Tennant creek and heading south, the road is dominated by long stretches of 40 odd km without a hint of bends. When they do come, the bends are so gentle that you almost miss ‘em. 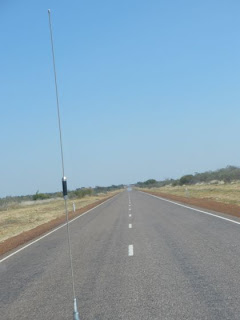 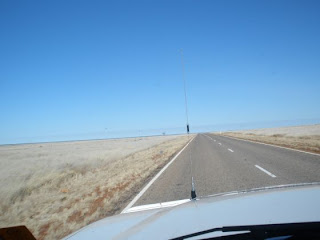 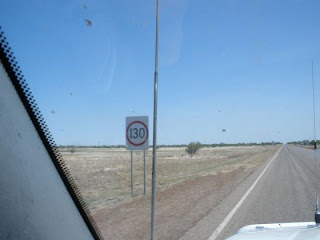 Speed Limit? what Speed Limit?
Tennant Creek has some nice little items that are worth a quick look. The old telegraph station is the best preserved of all the original 11 between Adelaide and Darwin – makes you think just how lonely and isolated the operators were. Such pioneer buildings also highlight how we should be constructing houses, as the original house was built of local stones (300mm thick), with 2 mtr wide verandahs on all walls. Step into the house and the temperature drops 10 deg. 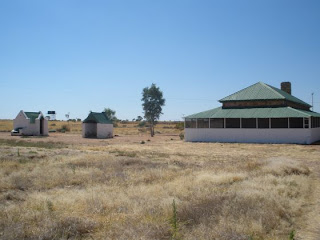 Given that Tennant really took off when they made the last significant gold strike in Australia, it’s no surprise to find one of the major tourists thingy’s is the old gold battery. The photo shows that health & safety weren’t such big items back then. 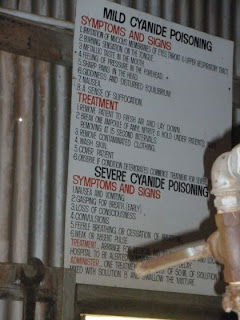 The caravan park at Tennant has a campfire with a local bush poet each night. Bush tucker is the campfire menu and yes, we did actually eat freshly cooked witchetty grubs which we found quite tasty (like freshly roasted peanuts).
Just over 100 km south of Tennant are the amazing Devils Marbles. We had always thought that they covered just a few house blocks in area. Boy, were we wrong, they seem to go on forever.  Spent some time looking and marvelling about how they could retain their balance for so many centuries, while we did the touristy thing and set up some posed photos. 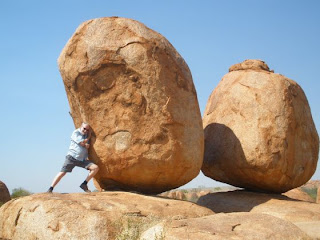 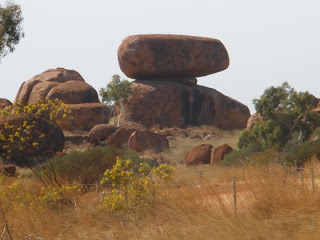 We spent the night at the UFO capital of Australia; Wycliffe Well. The caravan park is the only thing there, and given that it sells alcohol, the evening ‘entertainment’ put on by the locals is something that all the park guests would’ve preferred not to have. It seems that banning alcohol in the communities produces other consequences such as the grog being consumed at the point of sale – and then driving home!!!!  Again, when the sun goes down and darkness falls, it does so with a vengeance – dark so dark that you can’t see the locals at all.
I couldn’t resist a photo of the Hulk when the army convoy rolled in to fill up. Maybe I should start a ‘caption’ competition. 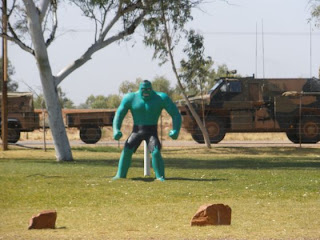 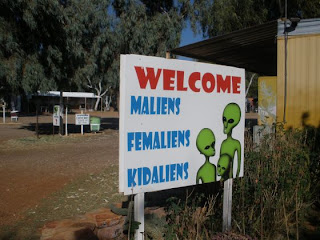 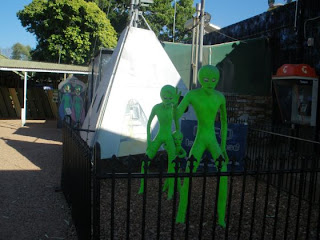 After leaving Wycliffe we headed to Alice Springs where we will stay for 10 nights. On the way we trundled through a roadhouse call Aileron and found that they have these giant statues of 10 metre tall aboriginal folk – very impressive. 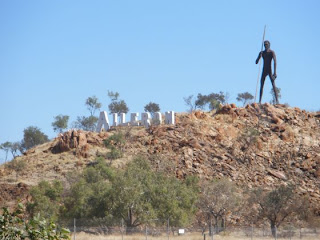 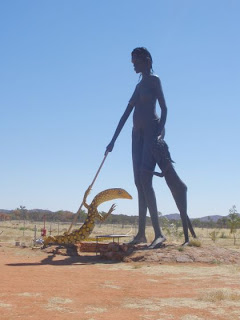