We left Hervey Bay after two nights with our treasured friends, Trish and Terry. Slept in bed number ??? (during the last month). Headed off to Benaraby, rather than Calliope as we had originally planned.


I always love hauling the van up the Bruce Goat-track; it’s hard to find a better example of how to do things wrong. Pot-holes, corrugations, bumps, dips, broken edges – it’s got ‘em all in abundance. The only solution is to drop the speed and curse the trucks that tear it up.

Whenever I’m dragging the van, I am not the fastest person on the road. If we go for an inordinate distance without an overtaking lane, a tail eventually forms behind me. I keep an eye on it, and if it gets (a) too long or, (b) a few vehicles been there for a few kilometres, I find a spot to pull over and let ‘em through. However, some drivers astound me with their failure to bring their brain along on the trip. Here they are, head of the queue and we come to an overtaking lane – it didn’t just “pop up”: there was a sign to say “Overtaking lane 5 km”, another at 2 km, and a final one at 300 metres. Why, oh bloody why, do more than 50% of drivers wait until they are well into the overtaking zone before they pull out and struggle to build up revs, and then just squeak past before the merge zone? And they stuff up all the others too! All I ask is that they drop back a bit, then at the 300 metre sign start building revs so that they hit the overtake zone with sufficient revs and speed to simply move out and toodle past without hindering those behind. End of rant, I feel better now.

Benaraby Caravan Park is on the Bruce Goat track, 20 km from Gladstone and the owner is grinning like the cat that’s got the cream. A huge big new gas pipeline project is starting up there, and there will be hundreds of new jobs, or 100s of jobs lost (depends on which political party you believe). Benaraby park has already purchased 80 new cabins (and has rent or lease contracts in place), and has another 140 on order.

We Left on Wednesday morning to head to St Lawrence which is about halfway between Rocky and Mackay. Stopped at Marlborough for lunch, all was good except that the bloody Bruce Goat Track was having roadworks every time you got into a bit of a rhythm. Watching the odometer and decided that St Lawrence should’ve arrived by then . . . . . pushed on, worried more, spotted a sign showing distance to Sarina, quick calcs ...... some bastard had stolen St Lawrence. By the time that we had confirmed our number crunch, we were at Clairview. Given the time, we had little choice but pull into the Caravan Park. After setting up, we were sitting outside trying to understand how we could lose an entire village – I can understand an item of clothing; a tool; or even a TV remote, but an entire village!?

A couple pulled in beside us and also began the task of setting up – overheard us chatting and came over and explained that they too we supposed to be at St Lawrence. So, who stole St Lawrence – I bags the TV rights to the series of “Australia, you’ve got lost villages”

When we were checking in at Clairview we discovered that the front window cover had come undone and been bent back towards the roof – buggered. Some phone calls established that our best only option is to wait until Cairns to get it fixed. So we now drive along with some big Gaffer Tape band-aids holding the cover in place.

If we thought that Tin Can Bay had big tide variations, Clairview has a 6 metre high to low range (park brochure says its the 2nd largest in the state, but I think that’s a bit suss). Apparently St Lawrence is the only larger tidal range ....... Ah, Ha. That’s what happened. It was high tide when we went past and it was underwater. 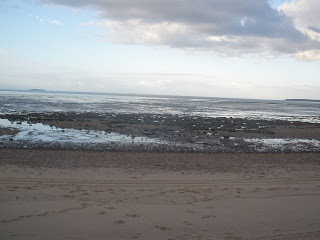 Thursday, arrived at Bowen and it is magnificient. The views are awesome. We are parked right on the beach and look out to a crystal clear smooth azure sea. Popped into town to see where they made “Australia”, and got mistaken for Hugh Jackman! This was a new experience for me, since I normally get mixed up with Brad Pitt (I really would like to do a little mixing up with Angelina). Might go for a swim tomorrow, if it’s not too hot.
Posted by Cob and Oma at 10:27 PM