Our time at Bowen was great with not a single tiny thing to complain about.  The commercial centre of town is somewhat small and it’s easy to see why the movie people chose it to substitute for war time Darwin. Not a single building with more than two levels, but does have some really nice older places.
Our van park was right on Queens Beach where we walked in the setting sun. I went fishing, and maintained the style of not catching anything, although I had a lot of success finding yabbies. 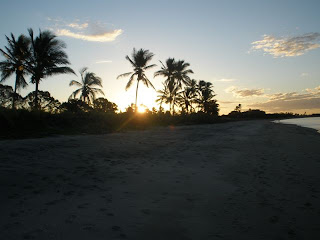 Collinsville is a small coal mining town, about 80 km west of Bowen.  We did a day trip and would you believe, $5 for ‘honey mustard prawns’ at the local Mine workers Club.
The top floor held the historical museum of Australian coal mining. Everyone should visit these places to understand just what the folks of days gone did. Miners worked more than a kilometre underground with less light than a flickering match.  Teams of two: one blowing and digging, one shovelling into a skip hauled by a Clydesdale horse (Ponies were not used, because of the weight that had to be hauled). If the carbide lamp went out, the two blokes grabbed the horse’s tail and took the ‘Clydesdale route’ to the top.
Also of note was that Australia has had 9 major mine disasters since 1886. Five of these happened since WW2 and in each case subsequent coronial inquiries have found that management’s push for greater profits over safety have been the cause.
We left Bowen last Friday and pushed north through endless cane fields. The size of Townsville was a big surprise. It appears that a new satellite city called Thuringa has just popped up and claimed the title of Australia’s fastest growing city. We continued on to Cardwell.
As we approached, the evidence of cyclone Yasi was everywhere with whole forests knocked over and trees every which way but up. Cardwell would have to have one of the most picturesque main streets imaginable. One side are the shops, and on the other is the beach and ocean with many off-shore islands. Unfortunately Yasi has eroded the beach and flattened the fringing trees. Approx 40% of houses still wear a tarpaulin roof, and 10 to 15% remain uninhabitable. 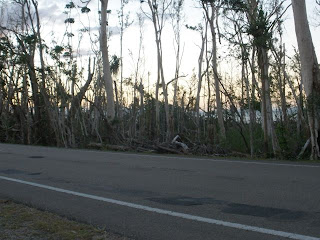 Only a few trees within our van park escaped without significant damage. The van park owner was one of the few who didn’t evacuate, but stayed in his house and watched from ‘within’. He tells of a 10 metre coconut palm that bent so far that the top was bouncing and beating on the ground, and yet when the wind died down, the tree popped back up with only some of it’s fronds missing – even the resident possum remained (the tree did have some really deep claw marks) 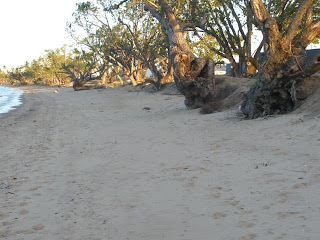 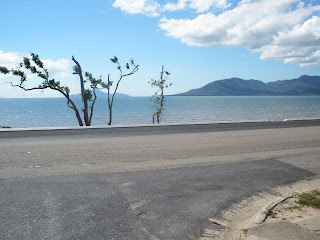 As if to test the resolve of the people, Cardwell flooded about 5 weeks later.  The parks rain gauge showed just under one and a half metres of rain within 5 days – that’s 300 ml per day.
Left Cardwell on Monday and moved northwards thru Tully and Innisfail to Cairns, then further to Wonga Beach (25 km north of Mossman).  We stopped at Cairns to have the damage to the van assessed and were amazed at the “retail opportunities” on offer.  Shopping centres, shops, malls, and discount warehouses seemed to occupy every available piece of land.
The road between Cairns and Port Douglas is awesome. Slow and twisty, but with the beaches hard up against one side and the mountains on the other, the magnificent views are so continual and prolific that by the time you are half-way, you become somewhat casual. If there is a weakness it is that Queensland doesn’t have any surf (north of the town of 1770). If it did have some real waves and breakers, this road would rate as one of the World’s modern 7 wonders.
We are now at the Pinnacle Village van park at Wonga Beach, and feeling very relaxed. Wild peacocks (and peahens) roam freely and readily come to you for food. I wonder what the collective noun for peafowl is?  A flock? A mob? A Group? Nah! It must be a Pod. As in a peapod. 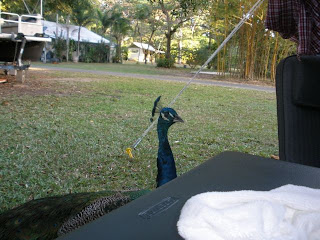 Temperatures are around 25 – 27 degrees daytime, but does drop a bit at night – I had to do one of my shirt buttons up last night (while sitting outside sipping a wine).
Daintree River is a truly incredible waterway that supports the most diverse variety of life. We did a boat ride on the upper river and were astounded to find that the river floods a couple of times each ‘Wet’ – not just a metre or two, but 9 to 12 metres. I wonder how Canberra or Sydney’s drains would cope with that.
It was interesting to discover that at Daintree village, the river is mainly freshwater but still tidal!  Local cattle drink from the river, and 15 to 20 times per year, a croc takes one. Tourists only get to see the bigger males because the smaller ones have yet to develop the confidence to be seen in the open. Our guide told of his co-guide who worked all day taking tourists along the river and only seen 2 crocs. That evening, he took his own boat out for a bit of Barra fishing, and when he shone his torch around, he counted 48  pair of eyes. A few minutes later, he explained that even this far up the river, they still regularly see Bull Sharks  - I looked up at the rows of life jackets adorning the roof of the boat, and thought if the boat sinks, I’d want something to help me walk ON the water, not float in it. 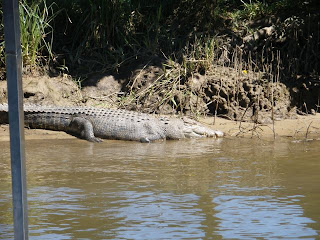 A day of rest tomorrow, because this retirement thing can get very tiring.
Posted by Cob and Oma at 2:30 PM