It has been quite a while since we updated our blog, and so much has happened.


Firstly, we had just settled into Tin Can Bay when we received a call to say that Shirl’s mum was in hospital and not doing very well. A lot of phone calls later we decided to lockup the van and drive to Sydney. Sadly, we were just leaving Brisbane when we received the terrible news that Venessa had passed away – the journey south was a very sombre trip indeed.

The anguish and heartache that one feels at times like this, is not lessened when you need to undertake all the logistics and make all the decisions that the ‘system’ asks. Each phone call to let someone know the bad news, invokes a new round of tears and deep sorrow. By the time of the funeral, you are just wrung out beyond comprehension, but you need to push on. From previous experience, both Shirl and I know that it will take a very long time for the emotions to return to some semblance of normal.

Monkey Mia in West Oz has the reputation as Australia’s prime dolphin feeding location. However, there are a number of other locations that are as good as, if not better. Tin Can Bay has a pod of very rare estuary dolphins. These guys live their entire life within the shallow waters of a bay or estuary and never venture out to sea. Unlike other types, these have pods of only 8 to 10 (rather than the 50 or so of sea going dolphins), and don’t reach full growth until after 45 years. By this time the males are 200 kg. 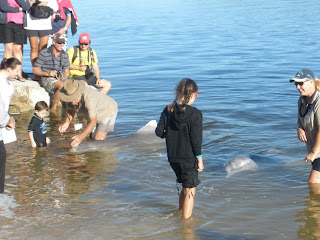 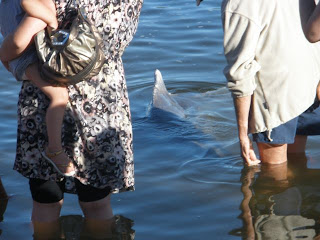 It is a good thing that the dolphins here like shallow water because when the tide goes out, you need to walk a loooonnngg way to reach the water. The entire ‘Great Sandy Straight’ really lives up to the name.

During the first drive from Brisbane to Tin Can Bay, I pinched a nerve in my neck. Initially, I thought it would just go away (typical male, says Shirl), but it stayed with me all the way to Sydney. Found a remedial masseuse and told him my troubles – he was quite happy to do a massage, but offered a new “Dry Needle Therapy” option. Needles similar to those used in acupuncture are inserted into the pain area, and tapped, wiggled, twisted etc, until your muscles twitch 3 times – this is repeated in multiple locations around the area. Amazing: the pain relief is immediate. 90% improvement! All done in 10 minutes. Had a second treatment (security blanket) on the afternoon before we left Sydney.

The day after we first arrived in Tin Can Bay, we did the 35km trip across to Rainbow Beach. Very trendy and like a mini (tiny) Noosa with a real surf focus. From the end of the very short main street, you look down a 50 foot (15 metre) embankment to the beach. Clearly the thought of climbing back up the stair is too great for many folk to contemplate, as the beach is littered with 4x4’s parked every which way as their owners swim and sunbake: looks odd. 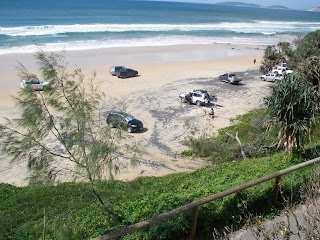 Just to the north of Rainbow Beach is the 12 km long Inskip Point which is completely sand, with a covering of coastal trees and shrubs, and chock-A-block with campers. Everywhere you look there is either a tent or a lightweight van and a 4x4. At the end of the point is a beach where a shuttle ferry moves vehicles across the very short stretch to the bottom of Fraser Island.

Upon returning to Tin Can after our Sydney trip, we found we had a new neighbour: Conrad and his “Beaut Big Bus”. He has been travelling for over 15 years, the last 5 in this amazing machine. Over 1000 Watts of solar panels: 3000 ampere hours of battery (and all this @ 24volts). Takes 450 litres of diesel to fill the tank(s). The top floor is all living space, with storage underneath. I know folks who have apartments smaller than this beast. He uses 3 cameras and 5 mirrors to see everything from the driver’s seat. 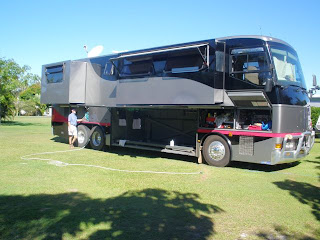 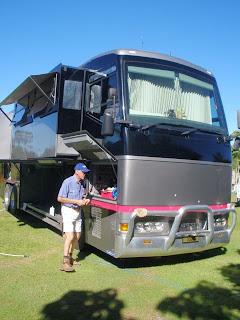 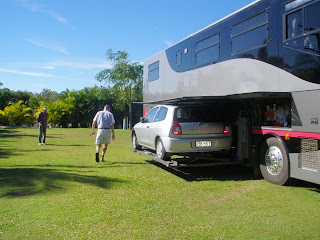 When reversing the van into our site, we had noticed a whine coming from Tom Cruiser’s engine bay – sounded like a slipping fan belt. Looked, tested, couldn’t find anything. Drove to Sydney and back, and on Saturday it started to screeeeeeetch. Too dark to see anything. Sunday morning, planned to be setting off for Hervey Bay. Changed top fan belt, still screeeeeetched: bugger! The bloke from the next door van joined me for a look, and after a lot of looking, we found that one of the two lower belts was completely gone! Bloody Sunday morning, in a small coastal town, and no spare belt: double bugger!

Amazing, my good neighbour, Bob, did a walk around the park to all the guys he knew that had Land Cruisers and came up with a pair of spares........ Bob is now my official hero.

Does anyone realise just how hard it is to change the two lower belts on a Land Cruiser? Hands and arm were not designed to bend in the required directions: knuckles are not covered with an impermeable and non penetrable armour. Why is it that no two nuts are ever the same size – you just twist, juggle and wind your hand into where the bolt / nut is, and after what seems like hours of blindly trying to get the #$&*@# spanner onto it, you find it is a different size than all the others!!!!

Eventually it was finished and Tom Cruiser was running like a new one. Hitch up, do the walk around and check, and off we go to Hervey Bay.
Posted by Cob and Oma at 10:23 PM