The Queensland Government did the unthinkable late last year and decided that our second eldest grandson could have a drivers licence. He then bought himself a 1995 Mitsubishi Triton 4x4 dual cab trayback. Shirl and myself thought that we should shout him a 4x4 driving course so that he knew just what his machine could and couldn’t do. So last Sunday Jordan and his Dad (Scott), in the Triton, plus Shirl & myself in the Cruiser set out for a fantastic day of bush driving. 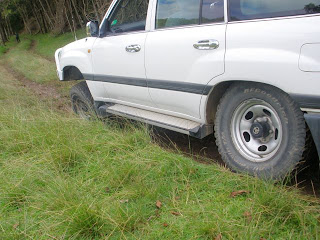 The training covered everything from bogs & logs to water crossings, recovering from stalling on steep hills, and then up and down progressively steeper hills – great fun, great learning, and all-round good day. 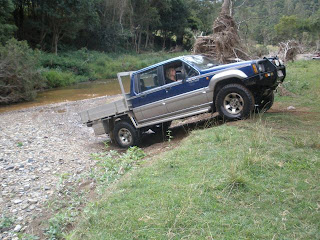 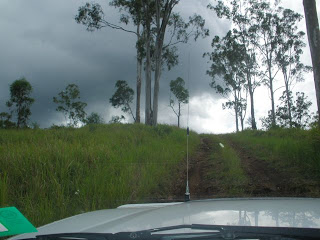 Monday morning came way too early – had to be out of bed at 5:30am – we didn’t even realise that such a time still existed. The last time we were up and about at this time, Gough Whitlam was still the Prime Minister.

Car packed, eyes kind of opened, then off to the Moreton Island Ferry with the entire family – all 18 of us. Arrived at the island at 9:45 and after exiting the ferry we had to drive along the beach for about a kilometre before we turned inland for about 7 km of sand tracks until we reached the 2 beach houses we had rented. Initial impression? Wow! What views. Unfortunately they were a little weakened by the rain – yes, more damn rain. Made the first day a bit damp! 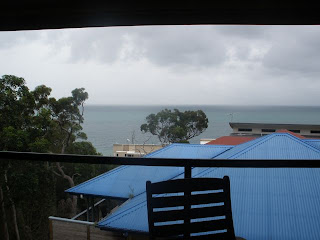 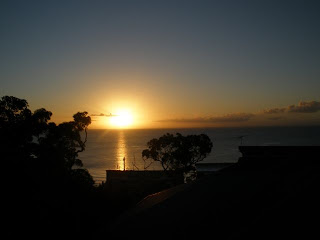 Day 2 fine and sunny, all the youngsters (anyone younger than Shirl & I qualifies for this title) were on the beach, in the water, or snorkelling. To get back to the houses, they needed to climb up a really steep and long series of steps. The trouble wasn’t just the steepness or length, but the steps varied in both rise and width so that you couldn’t get into a rhythm – bugger! Everyone gathered in the one house for evening BBQ – that’s a lot of people in one house; and a lot of kids to make lots of noise. 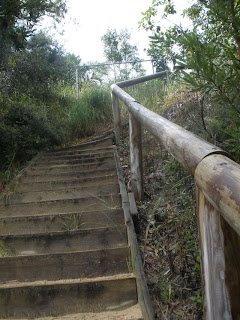 Wednesday had us all drive to the northern end of the island and look at the lighthouse – the only one in Queensland built from sandstone. The views from here are most likely the best from any lighthouse in Oz. If not protected by National Park, these would be lost to some developer. 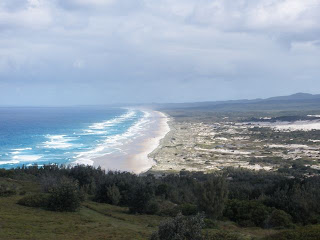 Back at the resort, the youngsters chose to go back to “The Wrecks” for more snorkelling. There are 6 old wrecks that are a haven for sea life and everyone and their 2nd best friends use them as dive sites. They got to see dolphins, fish, turtles, and more fish.

Once more back at the resort, we spied a passing submarine – not the sort of thing you see every day. 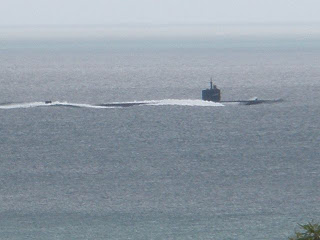 Thursday morning: Time to pack up. Yuk. Fifteen of the mob decided to go for a ‘Quad Bike’ ride. An hour later they returned with smiles that were wider than their faces – the Cheshire cat on steroids. Then onto the ferry and home to Scott & Gael’s place.

Yesterday was Easter Egg buying day for Shirl & I. Popped down to the local Woolies and found that they had a promotion that gave 10c per litre if you spent more than $20 on eggs – bargain, since we had a telephone directory size list of family to buy for. We came away with 3 vouchers that gave 14c/litre off, and one for 10c. The lady behind us was not too happy as we continually asked the checkout guy to stop the till whenever the total was over $20 to $30. However, since we will be filling up with fuel at least 4 times in the next month, and at 120 litres per fill, the extra 10c / litre is equal to $12 each time.

Rest day today. Scott’s house had a traditional easter egg hunt which was quite noisy and energetic given the number of kids involved. Afterwards, the entire family went to Sizzlers for a Sunday Breakfast – not sure it was a good idea because despite all the adults saying that they were going to have ‘just a coffee and cereal or toast’, everyone exceeded their daily calorie intake within the first 20 minutes - - - and then went back for more, and more.

Most of them had a fairly quiet day after this gluttony!

Wet & Wild for the youngsters tomorrow.
Posted by Cob and Oma at 1:18 PM