We stayed on for an extra day at Sawtell so we could go to the Woolgoolga Curry Festival – can’t miss a festival devoted to curry! What a success it was, I’m no good estimating crowd numbers, but there was a full house. Tried a number of vegetable curries (looking for ideas), plus some finger food. The big issue with all these food festivals is that you run out of stomach capacity before your taste buds run out of desire. 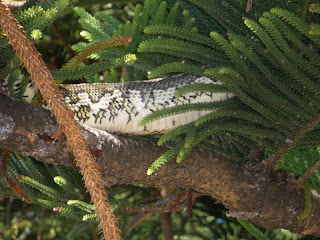 The area used was a large park right on the beachfront, with lots of trees. Despite the sound stage, the multitude of people, the numerous stalls and overall noise, a 6 foot python had chosen the lower branch of a Norfolk Pine as his ideal place to stretch out for the day. I think he won the prize for the most photographed thing.
Sunday was moving day: north to Mt Warning. Noticed that things are moving ahead with the new road north of Ballina with the climb almost bypassed but it will be quite some time before they finish the entire 20km to join the existing dual road. 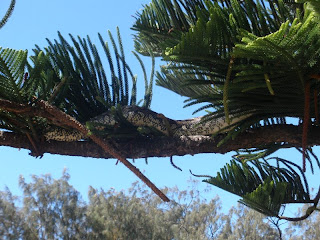 Our directions were to turn onto the old Pacific Hwy (now renamed ‘Tweed Valley Way’), over the Burringbar range, where the sign at the bottom advised “15%” climb – I don’t seem to remember it as that steep, but up we went. I was a wee bit nervous because we were running with the van at full weight of 3 tonnes, and “Tom” Cruiser also carrying a decent load. No need for concern – it happily climbed all the way in 2nd gear with no heating issues.

The directions then sent us onto a small country road that was so skinny we both had to breath in whenever a car approached. Around a corner and the road just pointed upwards – another 15% sign, and up we went. A lot longer than the previous climb, but the real issue was that the road was not really wide enough for comfortable passing so if anything came our way we would need to slow down, thus loosing revs and would force us back to 1st gear – and once down a gear, it’s really hard to get it back. Anyway, we got there with no issues.

Finally found the van park, and what a gem. They seem to have found a perfect solution for the common problem of ‘dogs allowed/no dogs’, by having a segregated area for vans etc who have dogs.
On the way here we passed through a small village with a sign “Warning, Children” – now I can understand warnings for wild animals, or dangerous road issues, but to have children who are so dangerous that they need to warn travellers about them is a worry!
The tweed valley is a tourists delight – we visited the Madura tea plantation where they do a great little tour that explains all about the making of tea – the older we get, the more we realise that we still know bugger all about most things! Next place was the Tropical Fruit Farm where, would you believe they grow 500 fruit varieties. We did a tasting of fruit that is in season and found a number of new taste sensations, that unfortunately are not to be found at the local Canberra markets. 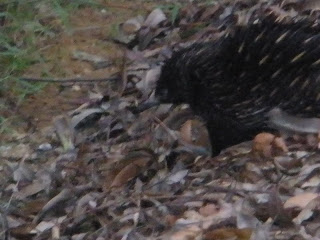 As the morning sun arrives, the first bit of Australia that it hits is Mt Warning. It’s the central plug of a volcano that blew it’s top some 22 million years ago. For the fit folks, a walking trail goes all the way to the top with the last 100 mtrs or so via a vertical climb aided by a chain. Shirl & I decided to have a go, and were amazed at the steepness – up, up and up, then around a ledge with vertical wall on one side, and vertical drop the other. Another bend, and the track kicked even steeper and harder. Thought this was about as hard as it could get, and after a little culvert, it kicked again until we thought we’d fall backwards. Finally we arrived at the car park where we got out of the car to read the info board and warning at the start of the walk . . . . . . . the road up to this point is without a doubt, the steepest tar road I have driven.


Another day we visited a farm that specialises in miniature horses – they aren’t ponies, but genuine tiny horses. The foals are so tiny that you could pick them up as you would a dog. Also on the farm are miniature cattle including the world’s smallest fully grown bull. 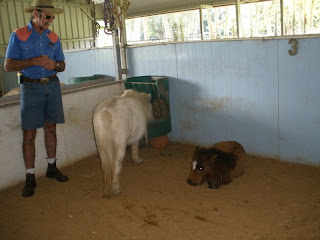 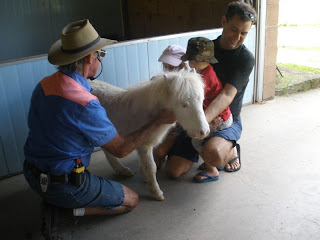 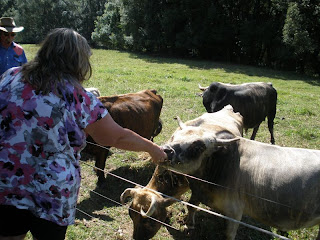 We are now in Brisbane with eldest son. The van is in for some minor modifications, and we are waiting for the rest of the family to arrive so we can all go out to Moreton Island for a big get together. We expect to leave here on the 28th or 29th.