Have had a folks from Czech Republic, Canada and Netherland camped behind us over the last few days. Great chatting with them and finding out what they think of Oz – it’s very big! Perhaps the most enlightening thing was that they find our easy going approach a bit odd. In their own countries, a man just starting a conversation (Hi, how ya goin') with another man would be suspected of being gay. Likewise, our funny habit of offering a beer to a stranger that you have just met, is difficult for them to understand.
The beach is obviously a preferred site for the “Surf Board Riding” schools that operate from Forster, because each day or so a small bus load arrive at the beach and do their thing. As grandparents of a 17 year old girl, we must say that the modern bikinis seem to have shrunk to intolerable proportions (Ian is not complaining). 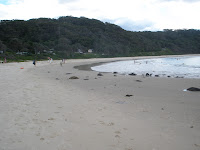 Ian went fishing (again) and didn't catch any fish (again). He has now extended his record of number of places, and number of different species of fish that he hasn't caught.

Walked up to the local lighthouse and our thoughts were with the early keepers – imagine waking up to that view every morning, and then getting paid for it! 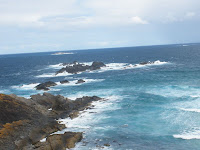 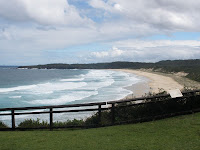 Went into Forster on Tuesday and paid our respects to Shirl’s dad and step-mother. Then, since it was Shirl’s birthday I decided to get in the good books and took her to a nice restaurant for lunch.
Pulled up stakes on Wednesday and headed for Sawtell. Pondered along the way that you can now travel from the Hume highway, south of the Sturt junction, to Port Macquarie and remain on dual carriageway. A bit different than it was 20 years ago. One thing that hasn't changed is Freddo's Pie shop at Fredericktown (just north of Kempsey) - still some of the best pies around. I had satay beef, and Shirl had Lamb's Fry & Bacon.
Sawtell Caravan park is really good – maybe the largest site that we have ever had. Again the area is occupied by a number of Brush Turkeys – if there are any at our next stop, they’ll be on the dinner plate.....
Thought we were back in Anna Bay last night – it absolutely bucketed down nearly all night. Woke up this morning to fine and clear skies.
Posted by Cob and Oma at 10:03 PM