We thought that we were going to float away during the first three nights at Anna Bay. Each night the rain just fell as if a fire hose was above us – no wind, just water and lots of it. Each morning we awoke to great sunny days, a little bit humid because of all the water that had fallen the previous night, but apart from that they were near perfect.
We drove into Newcastle one night to have dinner with brother Mal (and Robyn), at the Wests "Rosellas" Leagues Club (what sort of name is that for big burly tough footy players?). As we were leaving, the sky opened up and we were forced to drive the first 30km at less than 40 kph. Anna Bay is a part of the area known as Port Stephens. But Port Stephens doesn’t really exist as an item of land. The name refers to the water inlet only. The towns and villages which make up the locality are all separated by large tracts of National Park, bushland and/or sand. If you like beaches, you’ll love this place. Perhaps the ‘big daddy’ of them is Stockton beach: all 32 km of it. The dunes are considered the largest on the east coast and extend up to 3km inland. 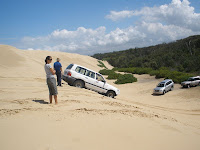 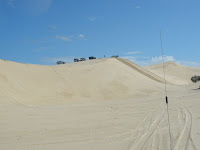 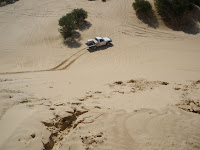 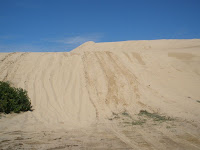 We went on a sand driving session with 7 other vehicles and learned heaps. As the day progressed, our confidence rose and we tackled dunes that we steeper than any sealed road we’ve ever seen. Perhaps the most amazing part was that Shirl didn’t squeal once all day.


The following day we had our first visit to our camp area by a Koala – obviously liked the flavour of a particular tree at the rear of our site. He (or She) used it as his/her evening restaurant.

I had a small win on Monday when we were at Salamander Bay and found a Mr Minute who sold new programmable remote key thingo. Since I had been quoted over $600 from Toyota, the $80 at Mr Minute was a bargain. Mind you, the method to get the car into ‘Prograqm mode’ was designed by a sadist. “..close and open door 2 times with working remote (what if I only have one its the bloody one not working), within 10 seconds begin turning the ignition key from accessories to on and back 20 times within 12 seconds...” and what if the key ‘catches’ or you loose count or you turn it beyond access (to off) = start again. Eventually got it – only to find that Shirl’s remote (the Working one that I had used) wasn’t a working one anymore!!!!!! Bugger.

Hitched up yesterday and moved a short way up the coast to Seal Rocks – no shops, no traffic, nothing but beaches, sun, and bushland. Walked along the beach; ah! Feel the serenity. Chatted to a guy who was fishing – introduced me to his wife whom he called “3 Horses”! When I commented how unusual it was, he explained that it was an old Indian name that meant “Nag, Nag, Nag”.

A Kookaburra visited yesterday evening and sat on a post just 2 metres from our van and didn’t mind if we walked right up to him. 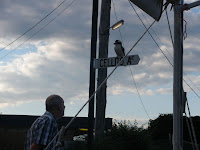 A number of Brush Turkeys walk around the park – they’re a bit shy and run from everybody. Woken up at 1am this morning by heavy rain! When we bedded down, it was perfect tranquil night. This morning it was still pouring – so we stayed in bed, because (a) we’re indulgently patient, (b) we can, and we’re not in a hurry.
Posted by Cob and Oma at 9:46 PM