After leaving St George we travelled to Surat where we visited the Cobb & Co museum. The last Cobb & Co coach left here before everything then went by train. They used 6000 horses a day in Australia while Cobb & Co was working.

Onto Roma and found our CP and set up. Geoff and Nancye arrived about 3 and we had coffee outside our tent with them and chatted for a couple of hours. This is a nice park, the man said they have been full all week.

On Wednesday we went to the Big Rig with Nancye and Geoff. Ian and I did a tour of the oil patch, showing how oil and gas were found in Roma and continue to be drilled for. Very interesting. In the evening we had a BBQ and sat outside for awhile with Geoff and Nancye then went to their van and had port. Gee this is a hard life.

Thursday we went to the sale yards but missed the sales as there were only 700 head of cattle today. So we watched the weighing and sorting. Lots of gates and pushing and prodding of cattle.

After the yards we went to the Roma Bush gardens and walked around the small pond with Geoff and Nancye.

Ian can’t find his wallet and has searched the van and tug. He hurt is back last night stepping down from the van and found a massage therapist in town so he went to try her out. There is a small winery near the park so we went for a tasting in the afternoon. Only bought two bottles this time. Port with Nancye and Geoff in their van again. Yum

On Friday while we were hitching up, Ian found his wallet behind the TV when he was putting the TV away. Thank god we hadn’t reported it anywhere. So off we went to Carnarvon. The road was tar most of the way and we saw lots of emus. Surprisingly there was only 12kms of gravel, as the last we heard there was around 29kms. In some spots it was pretty corrugated and bad but the van handled it well. Before we hit the gravel we stuck some newspaper in the gauze door to stop the dust. Saw lots of wallabies on the side of the road on the way in 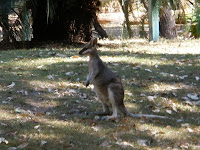 .
Very dusty everywhere. At 7pm we went to a ranger slide show in the clearing just near us. Very interesting, he showed us how the gorge was formed and talked about the fauna and flora.


Saturday was walking day so we made a casserole in the shuttle chef before setting off for the information centre back up the road. Then from there we walked 3.5kms, over 8 creek crossings and thru very beautiful forests. We saw a wallaby standing on the path and had to shoo him to get him to move. We walked to a branch off the main track which took us 650mts to mossy gardens. This is where the sandstone leaks making lovely moss gardens. A beautiful waterfall nearby and little runoffs from the pool. The area was lovely and cool and the water freezing. We were tired when we got there and spent some time cooling down. There were lots of steep steps both up and down to get there and our legs were telling us so.

On the way back we met a number of people who had walked many if not all of the other walks i.e. 9.7kms one way plus, and were on their way back. By the time we got back to the car we had walked over 8kms and my bunion and Ian’s shins were letting us know we had walked that far. That evening we sat outside and had dinner with a bottle of red wine.

Sunday is rest day so that is what we did. 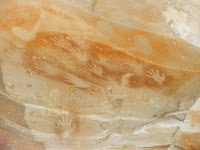 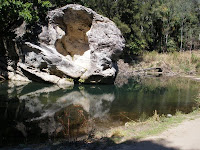 and Warrumbah gorge. Then back and went to baloon cave where there are rock paintings. Very nice. All up we did about 4,5 kms. Back about 11:15 and had lunch then partly packed up some of the van for departure tomorrow.


We left Carnarvon Gorge around 9am, along with many other vans. Once we reached the tar Ian stopped by the side of the road and put more air in Tom’s tyres. It was much warmer today. Stopped at Springsure for lunch and a look around. Lots of emus along the way, more photos. We saw a caravan that had rolled into a ditch on the road between Carnarvon and Rolleston. The vehicle wasn’t there and there were two men cleaning up.

We decided to stay at Lake Maraboon instead of into Emerald as the two van parks in Emerald didn’t have good write ups anywhere.. We set up and then went into Emerald to wash Tom, do some shopping and have dinner at a pub. We had lambs fry and bacon at the Emerald hotel, yum yum. 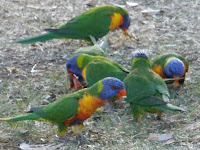 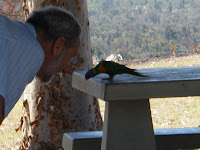 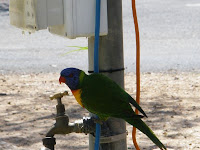 Wednesday is clean up day, washing of clothes, van both inside and out. Surprisingly there isn’t much dust inside so the van is well ventilated. The parrots here are amazing and hop all around the grass, drinking from the taps, chasing each other into trees.

Thursday we went into Emerald and Ian had the 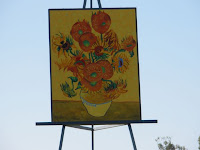 Jockey wheel fixed, then we went to the Botanic gardens and checked out the sculptured marbles, federation pillars and trees. Very dry gardens even though Emerald was flooded a few months ago. We also had a look at the mosaic footpath at the information centre, they have put a lot of work into their tourist items in this town.
Posted by Cob and Oma at 5:37 PM