Friday 18 Sept we left Lake Maraboon around 9:10 - the road varied along the way, and there were lots of road trains. We arrived at Mt Morgan just after lunch and then went into town to the information centre, checked out the lookout, dam (saw some free campers at the dam and had a talk to then). The suburbs are spread out all over the town from when there were 16000 people here, now there are only close to 4000. Walked the one remaining suspension bridge – there used to be 6 in the town. Just before we walked over it we saw 3 teenagers with their horse walk over it!!!

The town has a town tour so we booked a tour for tomorrow and rang the blink man re the Internet connection. Very warm tonight, we will need to take the doona off soon.

This is a dark park, very dry all around, they need rain badly.

On Saturday we went on the TMC tour of Mt Morgan. Well worth it. The tour goes around the town, highlighting the suburbs that used to be eg Tipperary, Glen Gordon, named after the different nationalities that converged on the town when the mine was in full swing. There were 27 pubs in the town at the peak, 4 soft drink companies over the years, plus numerous lodges eg druids, masons, orange, royal blacks. Each year the town runs a Running the Cutter festival to 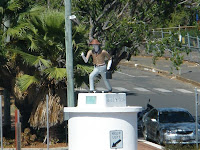 celebrate the Running of the cutter that happened during the mines heyday. As the miners left the mine after a shift, a runner would be sent to the pubs with a billy, fill it up and it would be given to the miner, who then sat outside the pub drinking it before going home. The mine produced gold, silver and copper over the years. The tour also goes to the mine and we were shown the first drawings plus pictures of the first workings and then the open cut. Then down to the caverns and the dinosaur prints in the ceiling, bats also live in the caverns so it was a bit smelly. An excellent tour.

Sunday we rested it the morning (as you do on Sunday's) then went into town to the bakery and had a pie for lunch, then off to the historical museum. Well it was a surprise. The exhibits were excellent and they had stories to go with most of the items so it brought it to life. 2 hours later we left and we drove around and took some photos of the buildings in the town. Checked out the road out of town then back to the van.

Monday I used the dump point before we left, although it is a bit off putting having it there in the middle of the clothes line. The road out was steep and bumpy. A kombi van was burnt out along the road near Marmoor and we were in a traffic jam for 40 mins before we could pass.
I am still waving to all the trucks; they probably think ‘who is this weird woman waving at me’. Some wave back. Finally filled up at Miriam vale then onto Agnes Water Discovery Park which is just out of Agnes Water. Set up within 1/2 an hour, we are getting good at this. Nice park, nearly full, shady trees everywhere, we cannot use toilet to empty van toilet at they cannot take chemicals in their system. Very eco friendly park.

Agnes Water is the bigger of the two, 1770 really just a small fishing village. The 1770 camping ground is full of tents, lucky we didn’t go there. The other park at 1770 also looked full and is on a big sloping hill so glad we didn’t go there either.
Wednesday we took the doona off and left just the cover on as we were hot the night before.
During the next week we drove to 1770 most days and walked along the beach to the camping ground then back. A couple of days there were some wind surfers who were skating on the water with a parachute in the air. The wind was really strong and they were pelting along. Ian went fishing on some rocks – no luck. Met two girls from Holland who are on holidays, they were hoping to see the sunset over 1770 but we told them the camping ground was probably full so they went off to have a look.
We were a bit cold the night after we took the doona off so we put the green blanket on, see how that goes.

Next day, well that didnt work last night we were absolutely freezing, I got up and put the little blue blanket on, then our jackets on top, then a warm nightie (Ian didn’t have a nightie so he put on a tee shirt). This morning we put the doona back on so it will probably be hot tonight.
There are lots of kookaburras singing their songs in the mornings. 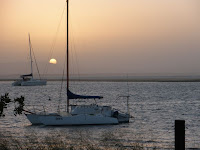 The sun set over the water at 1770 which was very nice although the dust reduced the red glow.

Sunday we moved onto Hervey Bay and that evening we had yummy lamb shanks for dinner cooked in the shuttle chef.

Monday we met with Trish and Terry and they took us to a shopping centre to buy some more books (I have read 14 books since the beginning of the trip so we needed at top up).
T 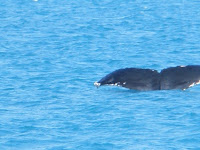 uesday we were off for a whale watching boat ride with the Tasman Venture. Saw lots of whales, one male standing on his head with tail out of the water and he was singing, he came up every 10 mins then back down again on his head. 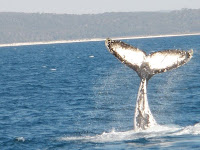 There were lots of babies showing off, hitting the water with their tails and jumping up and falling down. One got really close and was laying on his back and his mum came over and took him away. I cant show the other pictures as they are just the splashes after the tail slapping etc.
On Wednesday Ian hired a bike and went for a ride to Urganda pier and back, 19kms. Then we visited Trish and Terry again and went to lunch. Late afternoon Ian went for another ride on his bike. they are picking the bike up in the morning so he is getting his money's worth. 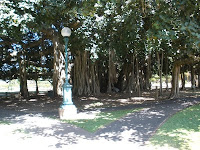 Thursday we drove to Maryborough for the day. What a lovely park they have in town, huge Banyan/Indian national tree, some branches held up by struts. They have market day every Thursday and close off their main street, Sunday in the park is the last Sunday in the month with bands playing and trains running. Lots of lovely old buildings, pubs. Beautiful old Queenslanders everywhere.