At last we're leaving. We stopped for lunch at Cowra and then visited Mrs Blackstock at Parkes. She is mum’s old friend and they have been writing to each other for 69 years, but haven’t seen each other for nearly 60 years. What a lovely lady, and 90 years old. It is Parkes' show day so we decided to go thru to Peak Hill for our first stop.


Along the way I started to wave to all the truckies on the way and 1 out of 5 would wave back. I reckon this is a good way to help the truckies to like caravaners.

We left Peak Hill around 9:30am and passed 90 caravans from Peak Hill to Gilgandra going south,about 130kms. Plus dozens of trucks. Ian started calling the ones going north on the cb to let them know when to pass. They all thanked us. I continued to wave to those going south and was having some success.


After setting up in Gilgandra we went into town. This is a small town with not many shops. Some had burnt down recently and there were renovations going on for a big IGA. We visited the Cooee info centre. Site of one of the marches for recruits in WW1. It was very windy overnight.


We had a blackout Tuesday night for about 2 hours; Ian wondered why the lights were out when he went to the loo. It was very windy leaving Gilgandra and got worse as we drove on, then the rain started so we had both. We could only drive about 80kph it was so bad. The roads were also bumpy and uncomfortable. . A few things got shuffled around in the van. 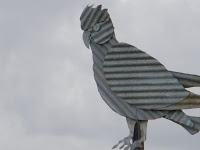 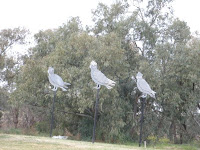 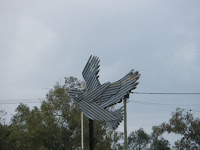 Coming into Gulargambone we were intrigued to see large galah's made from corrugated iron high on poles along the side of the road and in the park in town. The toilets also had large galah's painted on them and the caravan park's sign had them as well,. we saw hundreds of real birds, along with cockatoos, all around the town and on the roads into and out of.


We arrived in Lightning Ridge mid afternoon and after setting up we went to the info centre and checked out the town.


Today, the day we thought was Thursday but is actually Friday (this is what retirement does to you), we went on a red and yellow car door tour in LR. These tours you do from your own car and they have car doors marking where to turn etc. great, and all they cost is $1 from the info centre for the directions.


We travelled around some of the mine sites and there are caravans, tin sheds, old trucks and anything else you can think of that people live in while on the opal fields. 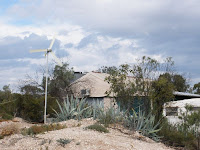 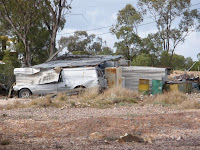 Then we went on the Chamber of the Black Hand tour. A mine that has been converted into a series of caves and the owner has sculptures into the walls. He started about 8 years ago and he has Egyptian, animals, cartoon characters, musicians and many more, It is fabulous. 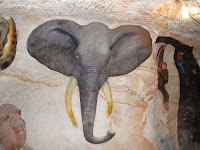 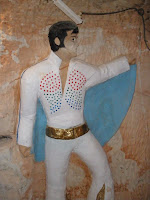 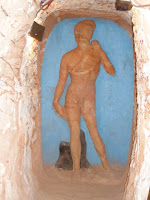 They also sell opals from their mine and other mines in LR either as opals or in jewellery. Beautiful. They gave us demonstrations on how the miners used to dig out these mines, coming down the shafts by holes in the wall, wow, it was hard work. The guide told us it gets to about 25 degrees in the summer in the mines, when it is 45 -50 outside. He said the town empties out in summer and most of the people leave town to cooler climates.

In the afternoon we went to the Bottle House. A house made of bottles. It was started by a man many years ago and he slept in the loft above the one room. God it must have been hot in the summer. The present owner has built additional rooms on and added more collections – Avon bottles (now worth $70+), petrified wood, all sorts of gems, opals and of course bottles.


Later that afternoon we had a huge storm – lightning, thunder and pouring rain. In the middle of the storm Ian saw a man come running out of his caravan with a towel around his waist, run to his van and grab some material or towels and run back to his van. While running back he lost his towel and Ian saw his bare bum. We assume there was a leak in the man’s van, but don’t even want to go to reasons why he didn’t have any pants on. It rained for about 2 hours and the park was awash, with little rivers running everywhere and the cabins surrounded by water.

Saturday we went to the walk in mine and went down the mine. Watched a video on mining and had a demonstration on different opals etc., bought Ian a watch and some books on opals. In the evening we went to a Dig In camp oven dinner just out of town Beef stroganoff, lamb stew with bush herbs, potatoes, cauli and broccoli, and choc cake. Cooked by two aboriginal men who also entertained us with yarns and didgeridoo.

Sunday we spent an hour at the mineral baths and the afternoon washing. Beautiful day, clear blue sky, warm enough to be comfortable but not hot.
Posted by Cob and Oma at 7:50 PM