This is the second leg of our goal to put 5000kms on Tom before we hook up the van. 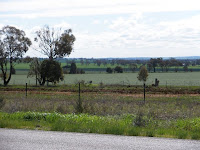 We left on Sunday and were very surprised at how green the countryside was - crops, grass, hills, and the trees are all in flower, wattle everywhere too. First stop Junee for a ploughman’s lunch (the last time there it was great) but no; they don’t have it anymore, very disappointed. So we bought some chocolate and licorice anyway.

Stopped at Griffith and went to West End wineries for more tastes and bought another case. This time we kept a list of the ones we want for Christmas.

Our first stop was Hillston motel. Not much to pick from in this town. Spots of rain overnight but it didn’t stay on the ground for long. Ian spoke to the NRMA man and the council about the roads and they said all ok. They haven’t had any real rain for ages. We left Hillston and set off to Ivanhoe. 100kms of dirt road, bad for the first bit but then softened out. 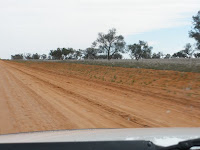 Ivanhoe is a small town and while there we bought some postcards for mum and the girls. The lady was washing the floor of the shop, so I had to wait over in the corner to pick the postcards and then pay for them. Then onto Menindee, more dirt road for another 200km. We pulled over to the side of the road and had lunch and watched a dozen cars pass by. There were also numerous emus, goats, sheep and cattle. They were working on the road and it was bad at first and very rocky, then smoothed out. The landscape varied from desert, to scrub, to trees. There were lots of wildflowers we just don’t know which ones, so I took some photos.


Menindee lakes are empty; we drove to the lookout and couldn’t see any water. Ian wanted to drive down to the bottom over the railway line but I wouldn’t let him so he found another road to go down.

Stayed at Broken Hill overnight. It was very windy driving into BH and also overnight and as we left town the wind was still blowing. 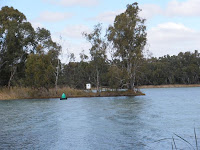 Called into the Wentworth gaol on the way and also checked out the spot where the Darling and Murray Rivers join.


Then thru to Mildura – what huge trees they have in the main street. On the way to Moulamein we saw various vegetation, changing all the time from trees, shrubs, grasses and back again to trees, we also saw what we thought were tumbleweeds. Decided not to stop overnight at Moulamein as it didn’t look very enticing, so we drove thru to Deniliquin. 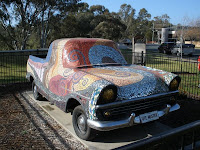 In the morning we checked out the Ute on the pole (Deni is the ute capital of the 'world') and the Ute covered in mosaics (the Arts school decorated a ute with mosaic tiles and it took them 2 1/2 years), and totem poles in park (don’t know why they were there). Drove thru to Mulwala lakes – dead trees in lake, very spooky, checked out the CPs in Lake Mulwala and Yarrawonga for future trips.

Onto Rutherglen, stopping at Pfeiffer and Cofield wines then into Rutherglen and found a motel. More wineries, All Saints and Morris (Ian found a tokay he would like for Christmas) and later on a great dinner at the Poacher's Pub. The following day we set off for Canberra, there is lots of roadwork along the way (Sturt highway and Albury), dozens of caravans heading south.


Achieved out goal and did 4973kms on the two trips and over 5000kms if you count what we did in between. Next week its off north - YEAH.
Posted by Cob and Oma at 4:28 PM