Our trip for July to go north was postponed when Tom blew a piston and needed a new motor. That took a few weeks to organise and on 11 August we took off, without the van, to run in the new motor.

We headed west through Crookwell and stopped there for coffee and a visit to the sock factory. They have a small shop and the back room is the factory, where they make 150-300 pairs of socks per DAY. Wonderful colours and styles for women, men and children. I bought some purple and pink ones for me and some multi colours for the girls. We continued on thru the old village of Tuena, Hobby's Yard and Blayney, to Orange (Ian's home town). The afternoon seen us run through Parkes and to the village of Trundle with its wide main street, which is the widest in Oz. Dusk arrived as we went through Tullamore (lots of T's around this part of the country) and after numerous close encounters with kangaroos we arrived at Tottenham for our first overnight stop. 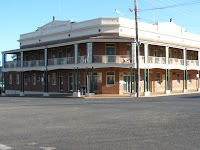 The hotel was in the middle of town and had a big verandah on top. We were the only guests so we didn't have to line up for the bathroom. We drank wine on the verandah and in the morning had breakfast there as well.

Thursday we set off to get to Quambone (the birthplace of Canberra Times editor Jack Waterford). Jack had frequently referred to his home town in the CT and we were looking forward to checking it out. Unfortunately we were disappointed with the small settlement we found. 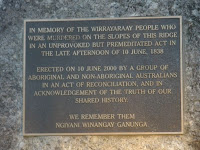 We stopped at Bingarra at the Myall Creek Memorial. This memorial is the site of the massacre of 28 aboriginals by 12 whites and resulted in the first conviction in the colony for whites killing blacks. Very well presented memorial and very moving.

After a overnight stop at Inverell we travelled to Sydney by Thunderbolts Way. We visited aunties, cousins, brother and mother. The traffic is terrible in Sydney, I will never complain about Canberra traffic again (well at least for a while). 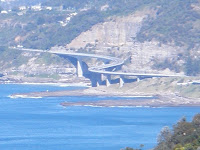 Sunday we were off to Dalmeny to visit Tracey and Graham for two days. Very relaxing time with them. We went via the Sea Cliffe Bridge - what a engineering feat, out over the ocean.

On Tuesday, on the way home, we checked out some places around the south coast to see if we would like to live there - the jury is still out on that. We arrived home around 2pm and unpacked. To pack up again in a few days for our trip to Broken Hill.