Wow! How time flies. It is now 6 months since we updated our blog and we haven't travelled very far, but have seen and done lots and lots.


During our first month at Mollymook we wore ourselves out looking for a new house, or block of land upon which to build one.  Eventually we came to the conclusion that our specific needs could only be met by undertaking a custom build.


Towards the end of February we found and purchased a suitable block at Sanctuary Point (approx. 5km from Jervis Bay), and hitched the van and hauled it to the Canberra where we had a number of really productive discussions with our Architect.  This resulted in a really different design that meets our needs perfectly. We stayed at the local Showgrounds – called “Exhibition Park in Canberra” (EPIC – so much more imaginative than just “The Showground”).  It's odd that everyone seems to visit places far and wide, but rarely takes the time to visit the local attractions - we're no different, so we took the opportunity to play like a pair of tourists at our former home city. 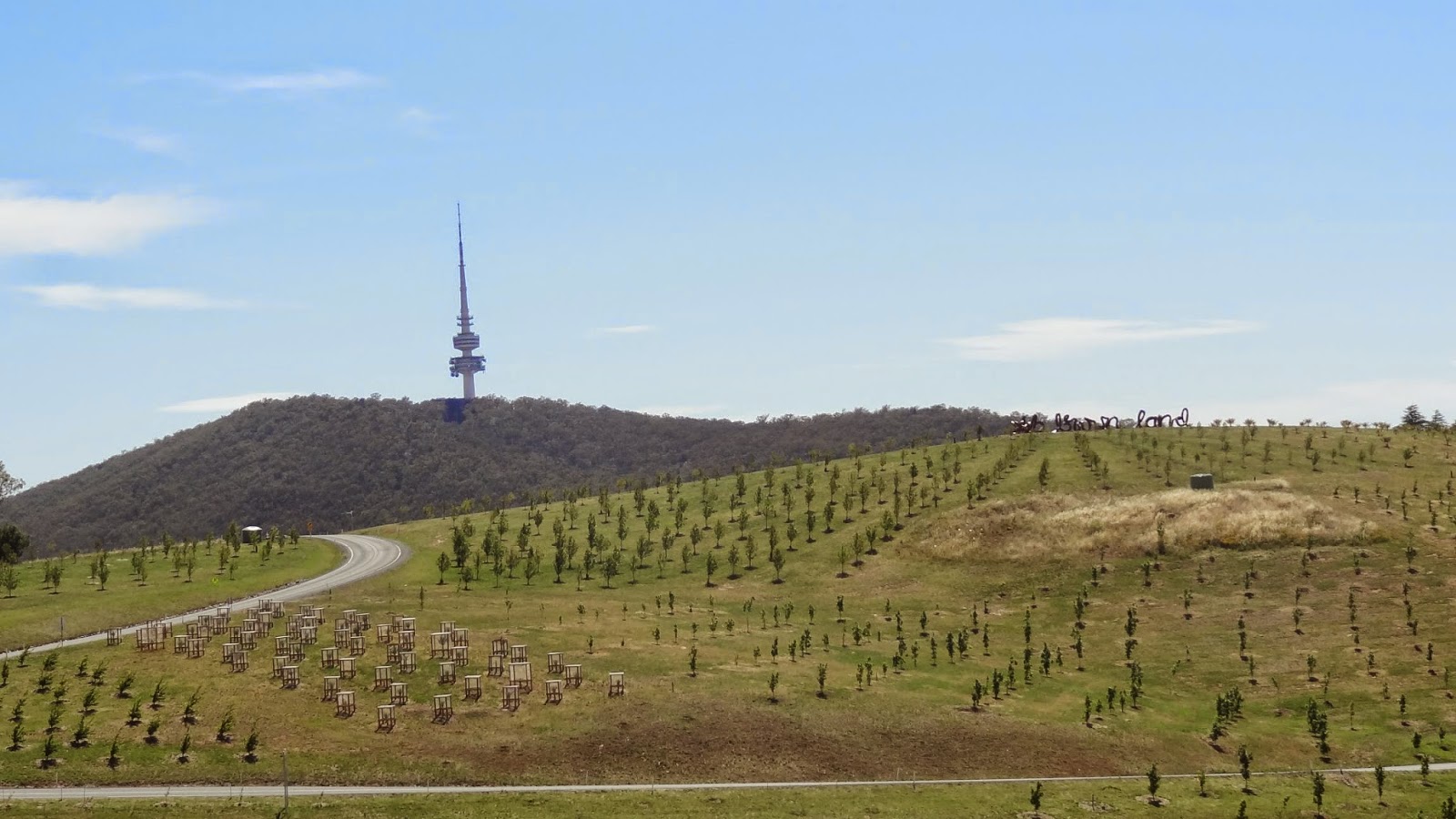 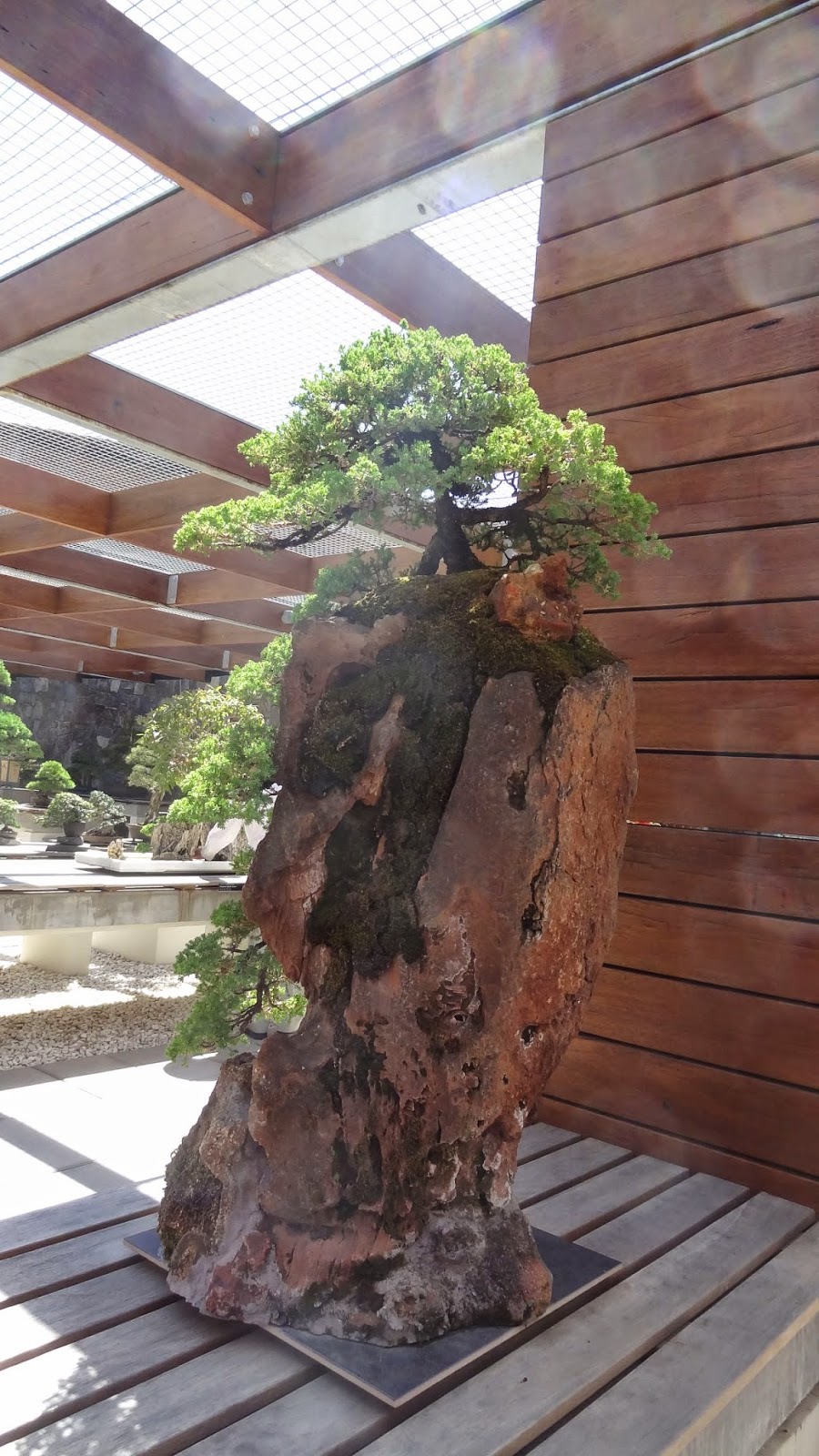 Within the Arboretum is the National Bonsai Collection - Wow!


One of the consequences of staying at showgrounds is the need to vacate whenever they have a major event such as the annual “National Folk Festival”. Thus we had to leave EPIC, but couldn’t find a site down the coast until the end of April. Bugger!


Our solution was to travel around parts of New South Wales that we had previously travelled through, but never stopped to look at. Off we went – first stop was the town of Young which has a very strong gold mining history and includes the first event where the festering tensions between European & Chinese miners burst forth into the public and legal view. In what seems to be a fine trend, we arrived in time to see the annual re-enactment of these events, together with the fair. Of special interest was that the centre of festivities was the former railway station – a place that I had seen a few times before, but only from a train. Some 60 years ago I lived at the city of Orange and on a few occasions had travelled with my mother and brother from Orange to my Grandparents home at Yass. This involved starting the journey in the dark of morning, and some 4 different train journeys later, we arrived at Yass very late at night – these days it’s about a 3 hour trip in a car. My time at Young brought back memories – some with joy, others being somewhat melancholy. 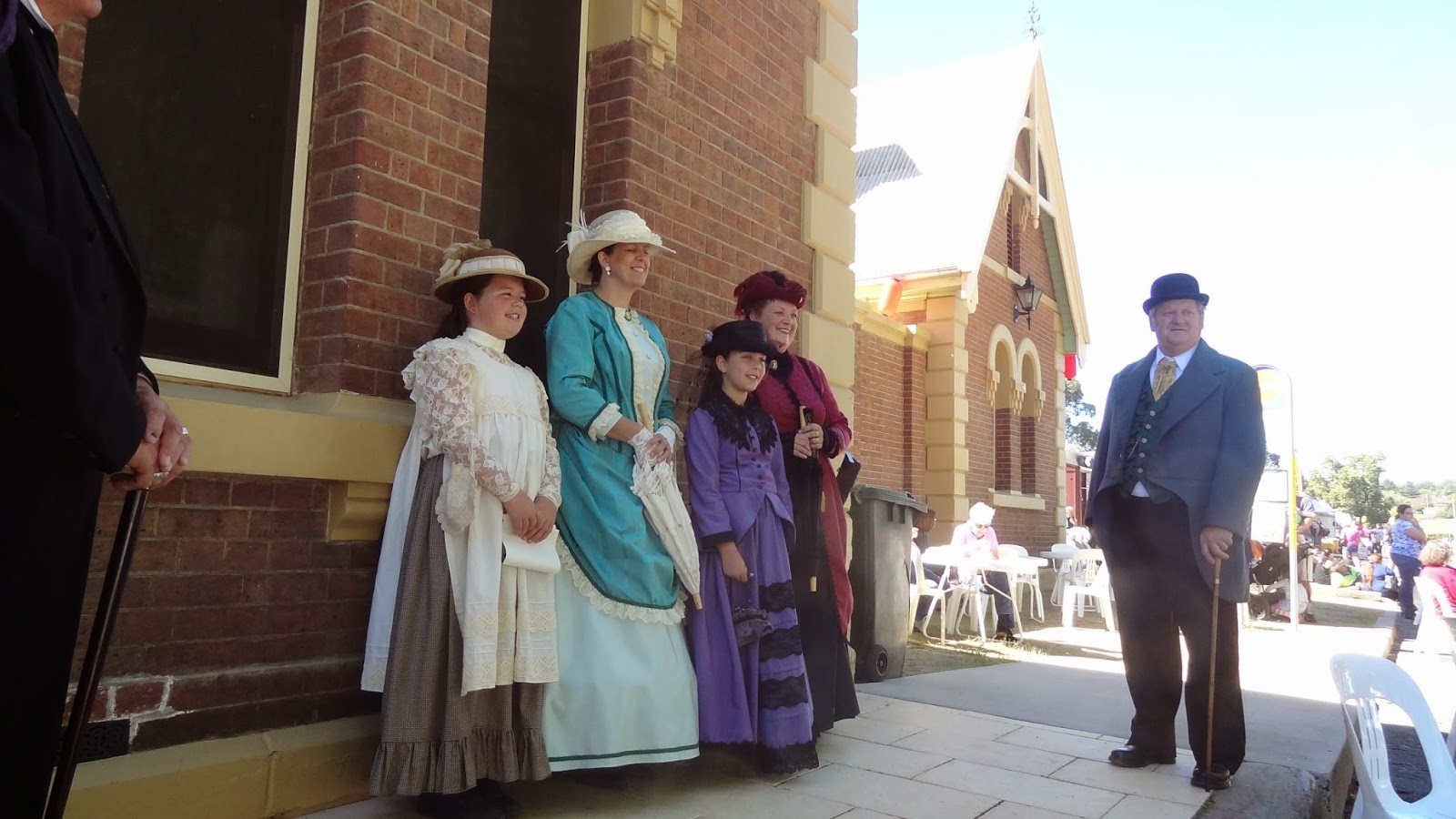 Re-enactment of Young in period of gold riots

Next on the itinerary was Forbes where we camped on the banks of river and beside the remnants of the old swimming pool – a fancy dressing room beside a section of the river and weir.  The town has a number of claims to fame – burial place of one of our notorious ‘Bushrangers’ (Ben Hall):  a very good example of a cityscape of buildings from the 1870s; and a really awesome car museum. I liked the museum the best! 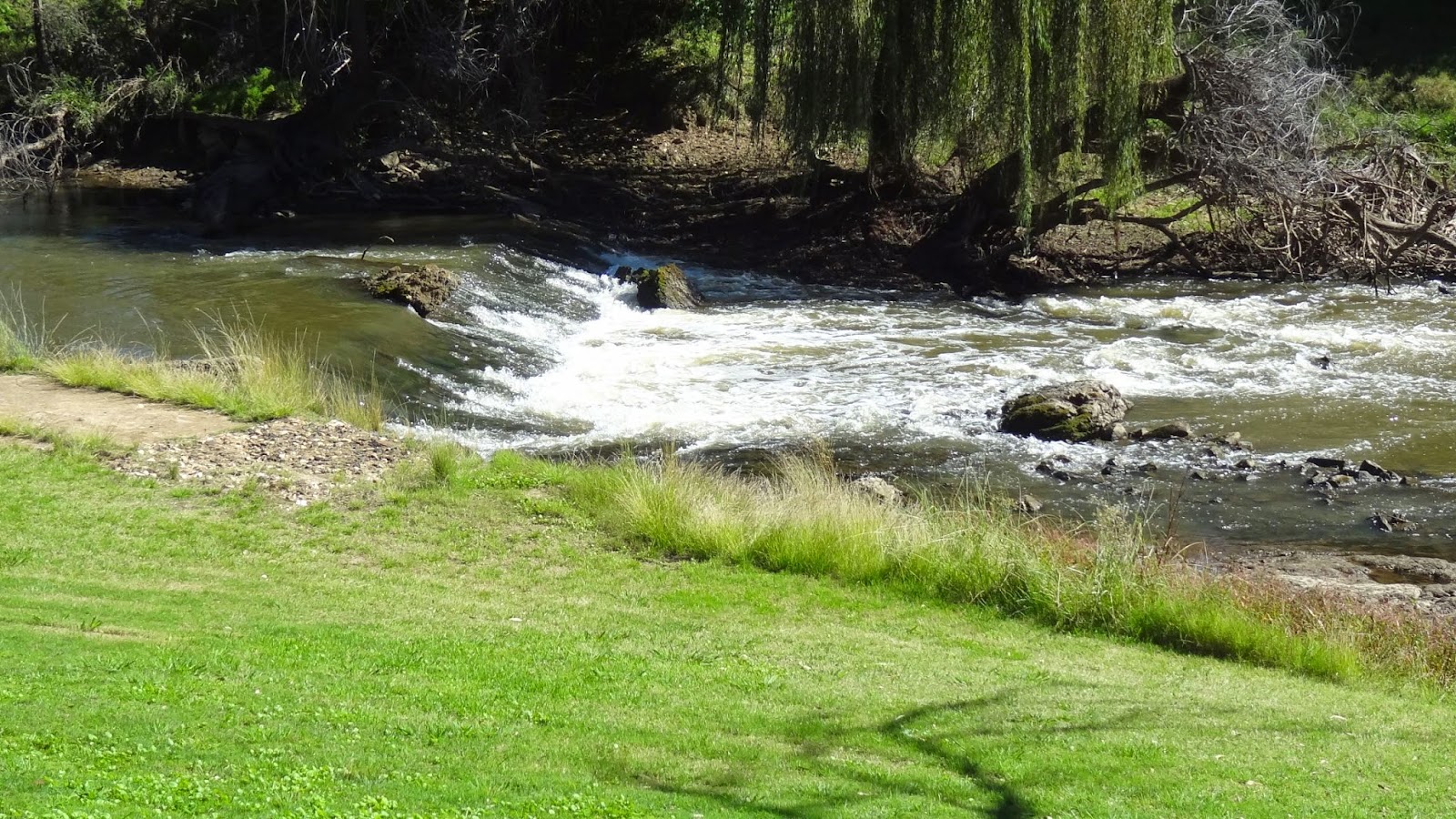 I can't see us holding the Olympics in this pool


While we were at Forbes  we took the opportunity to visit the town of Trundle which came to public attention two years ago when half a dozen ‘city folk’ who were without housing or work had been offered free housing and work in Trundle. This was an innovative idea aimed at slowing the towns declining population. Unfortunately, it seems that the idea wasn’t the success that the townsfolk wanted.  However, on a brighter note, the main street is still the widest in the state and the pub remains with what was the longest wooden verandah. 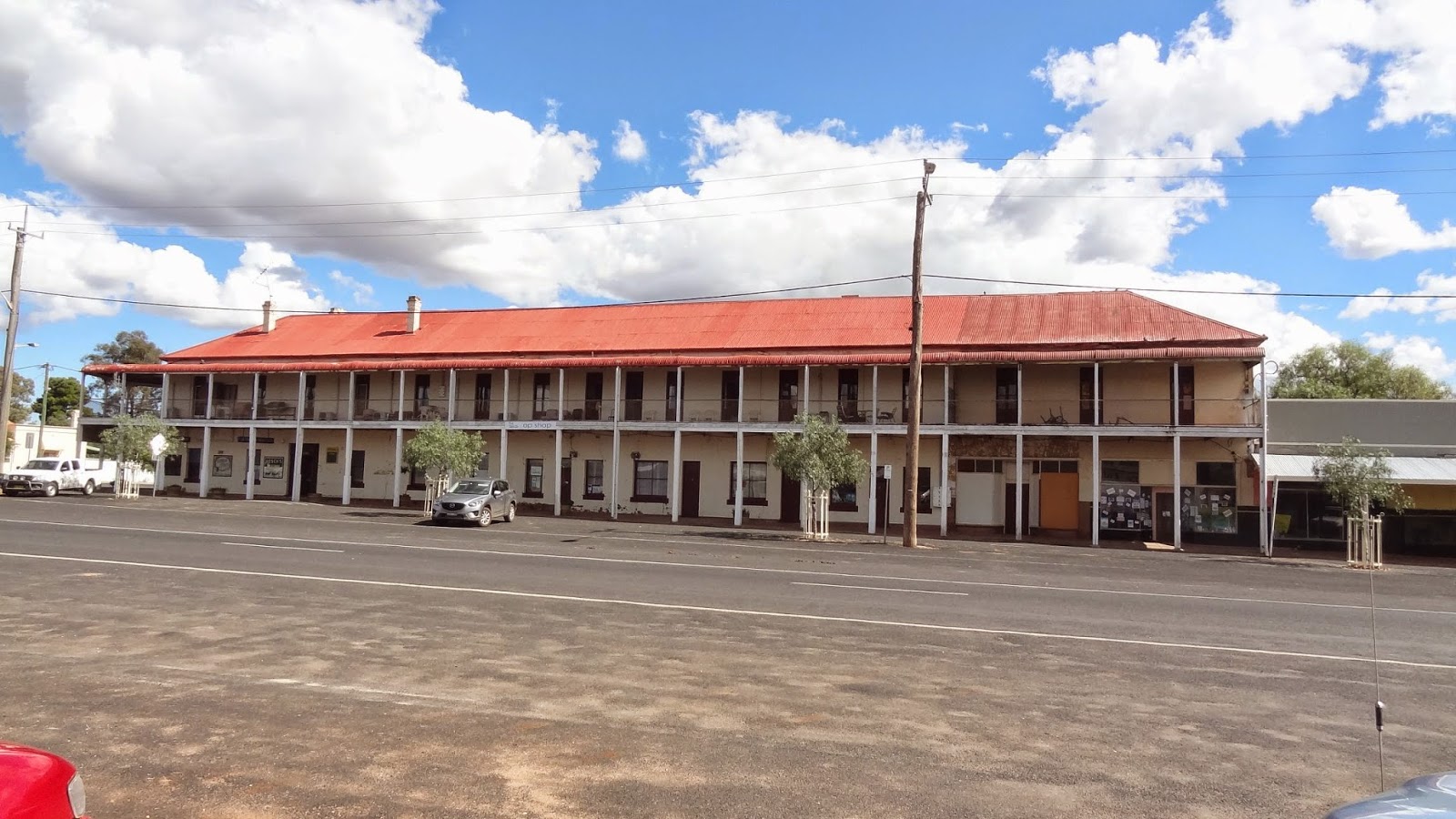 Trundle Pub - Verandah was originally 50% longer, but you can still turn a 20 beast bullock wagon in the street.


Since I was a teenager and first noted the turn off to Wellington Caves, I have wanted to visit them, but never found the time or circumstances that allowed me to do so. Well, I can now tick that one off the bucket list. As far as caves go from a visual perspective they are not the biggest or best, but they are quite special from a scientific bent. 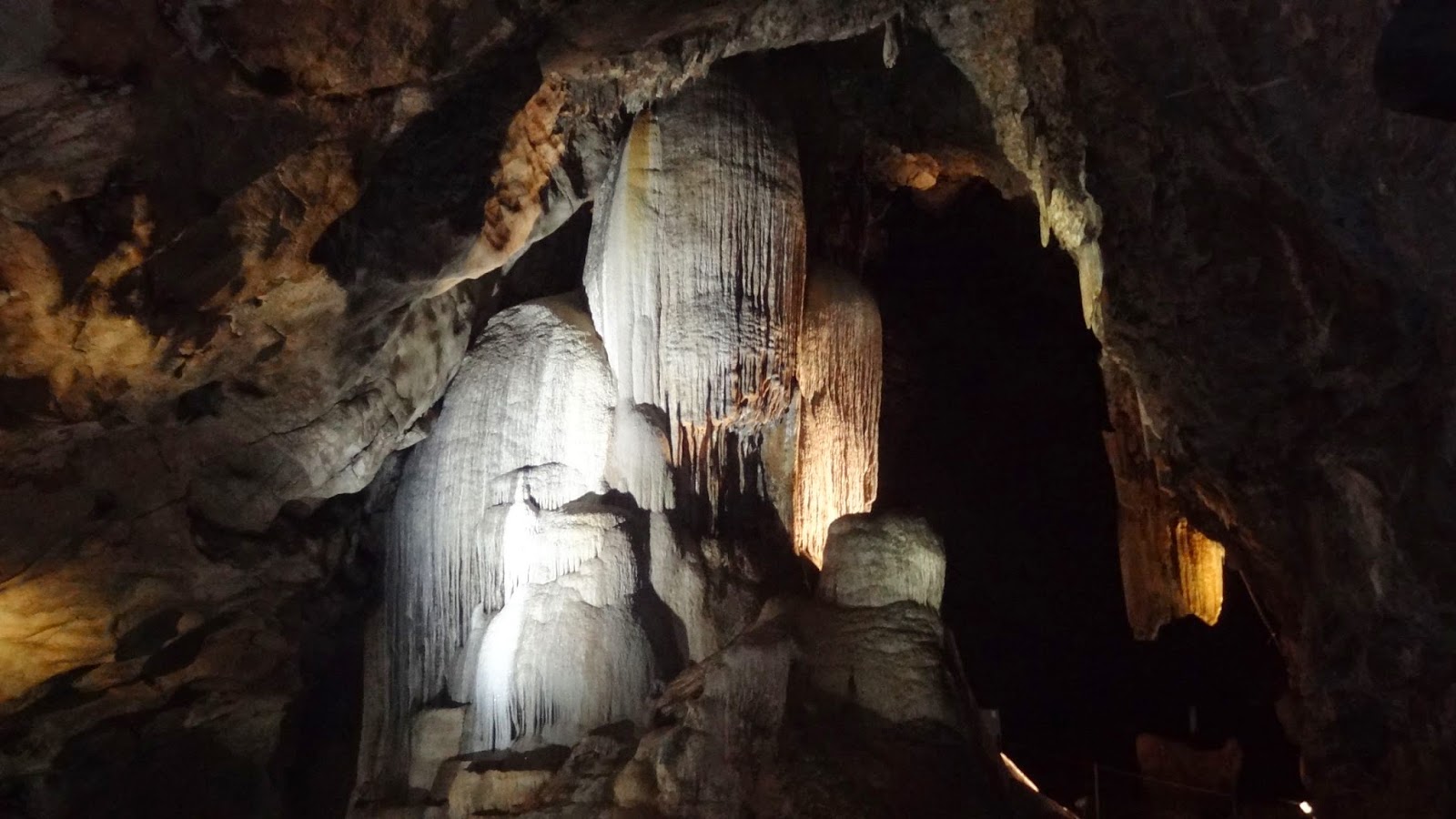 All limestone caves are good - some just bigger than others.
As we approached the Easter period a question arose of where we could find a site for our van during the said 4 days. All free camps would be filled by caravan travellers looking for somewhere, and most parks booked out with families on their 4 day holidays. Our solution was to seek a town that is small, somewhat obscure, and has little if anything to offer tourists or kids.  We chose wisely; we chose the town of Boorowa. Not much to do, but a great (and cheap) small caravan park within a small town that has all the needs. Four days of relaxation, then back to Canberra for a few more days before heading down to Lake Conjola where we remain some 3 months later.


Our house has been designed and submitted to the  %^&*%$#  council, and it appears that approval will be forthcoming this week, or the next or next or next. Meanwhile, we have spent many hours in tiling shops, plumbing shops, appliance shops, paving shops, and any other damn shop that exists.


The caravan park is one of life’s little gems. Because it is winter there are very few vans here – actually, if more than 2 more turn up on a weekend we think we’re crowded!  Mostly we share the park with a few other longer term residents plus hundreds of birds and what seems like half the Nation’s Kangaroo population. 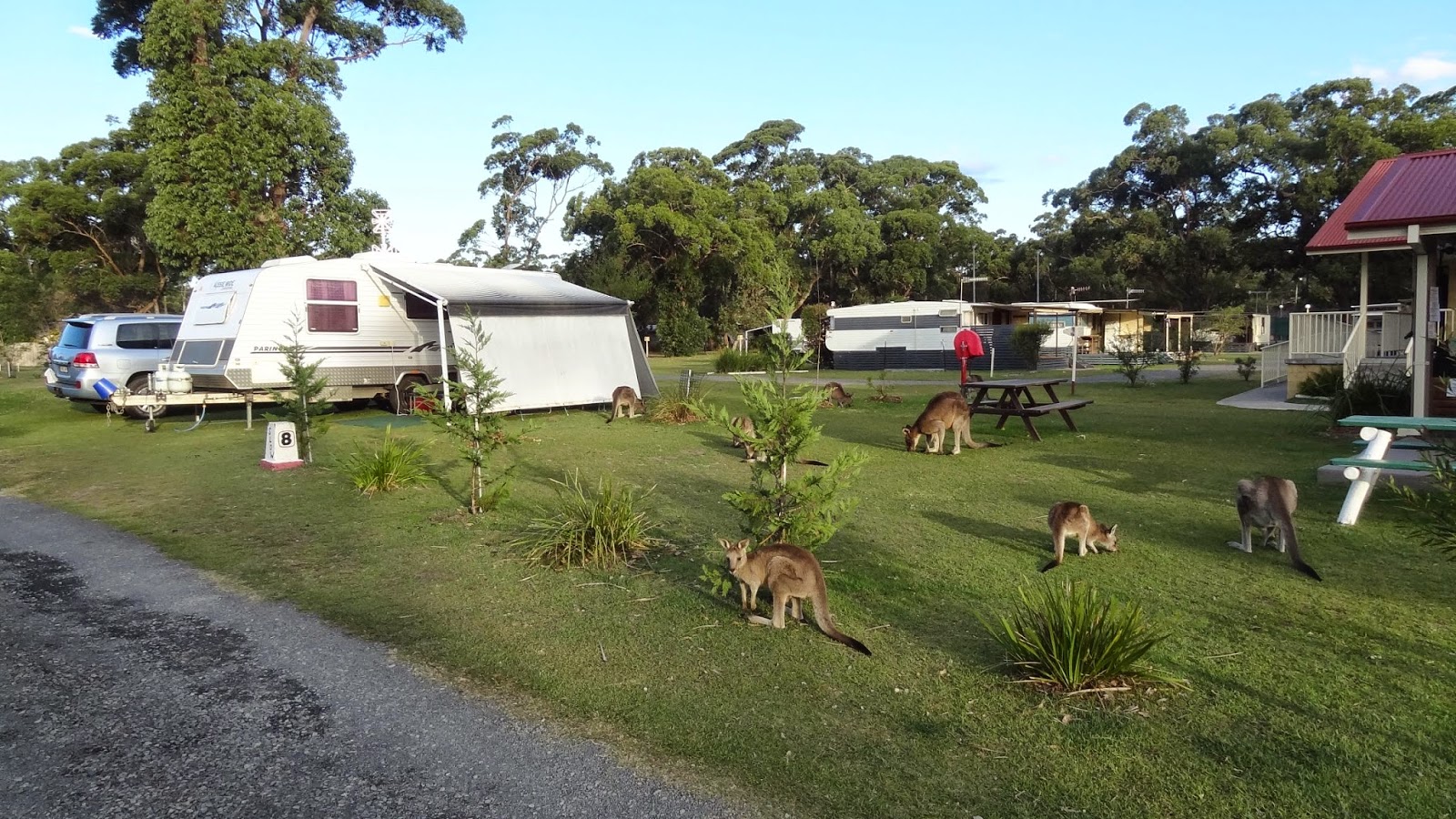 An everyday scene in front of our van. 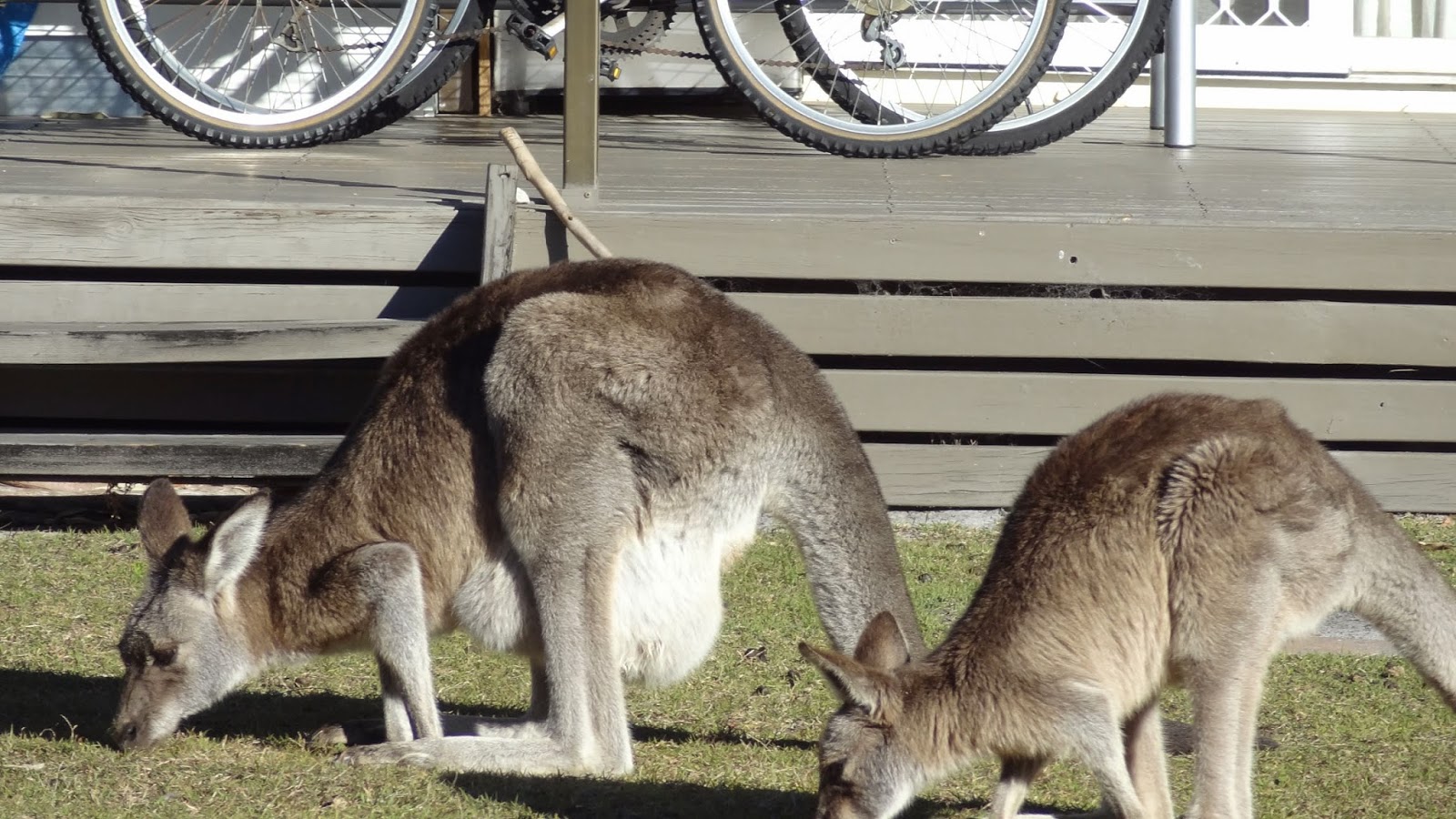 A mum carrying this years joey, and keeping an eye on last years. 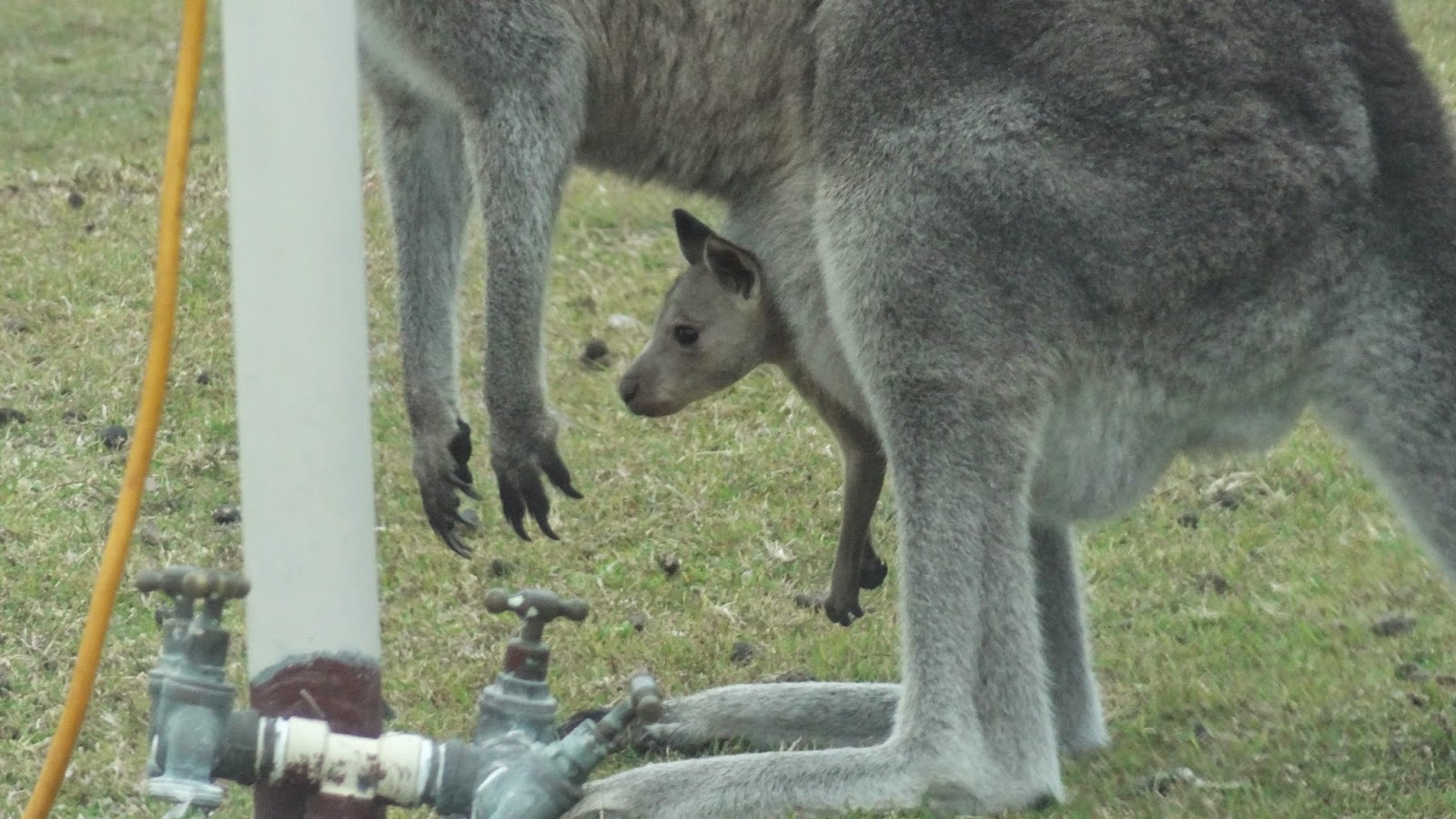 This little fellow popped his head out to look at us getting in our car - inquisitive little sod. 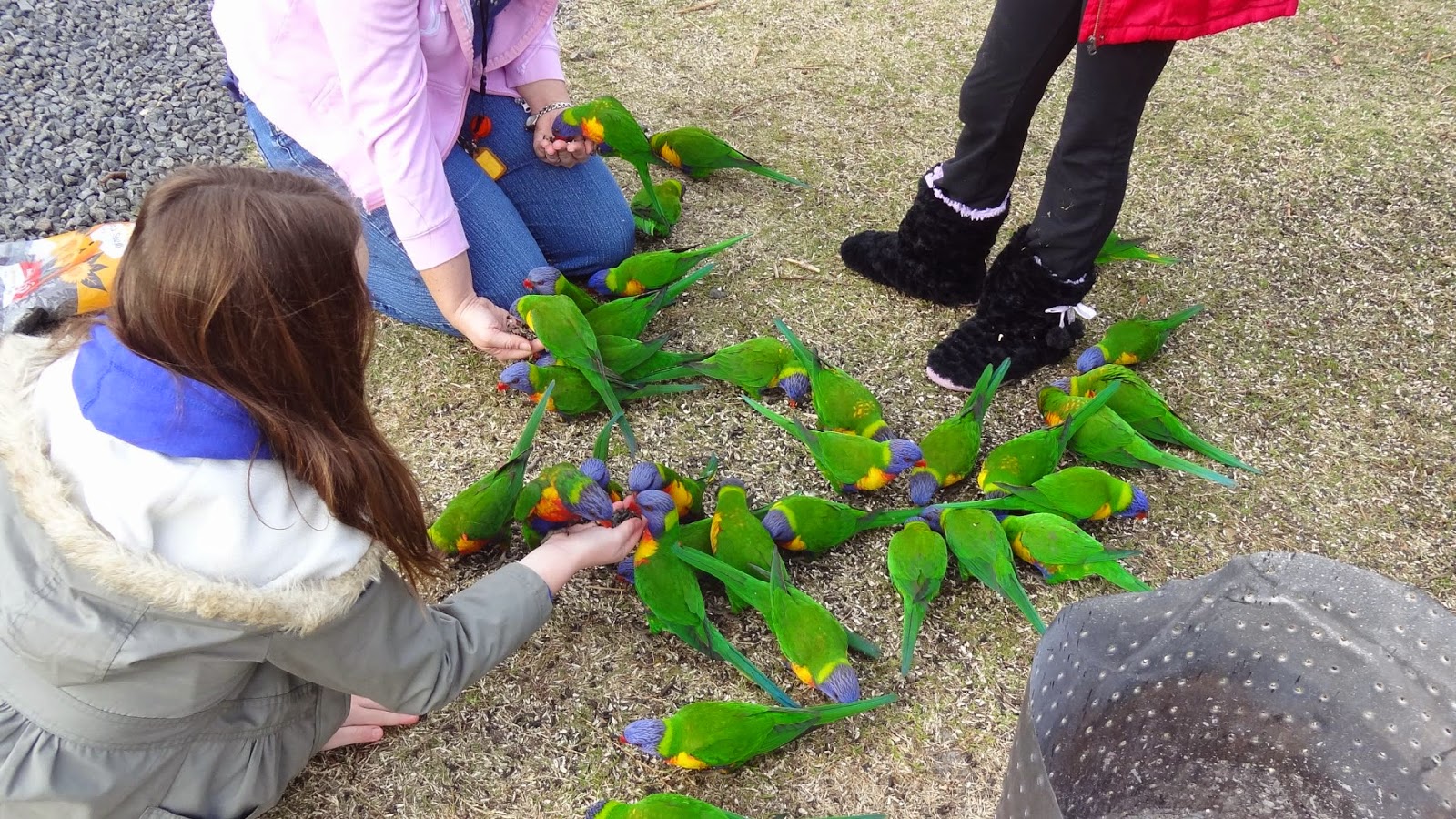 While you feed 'em, they'll stay and eat. 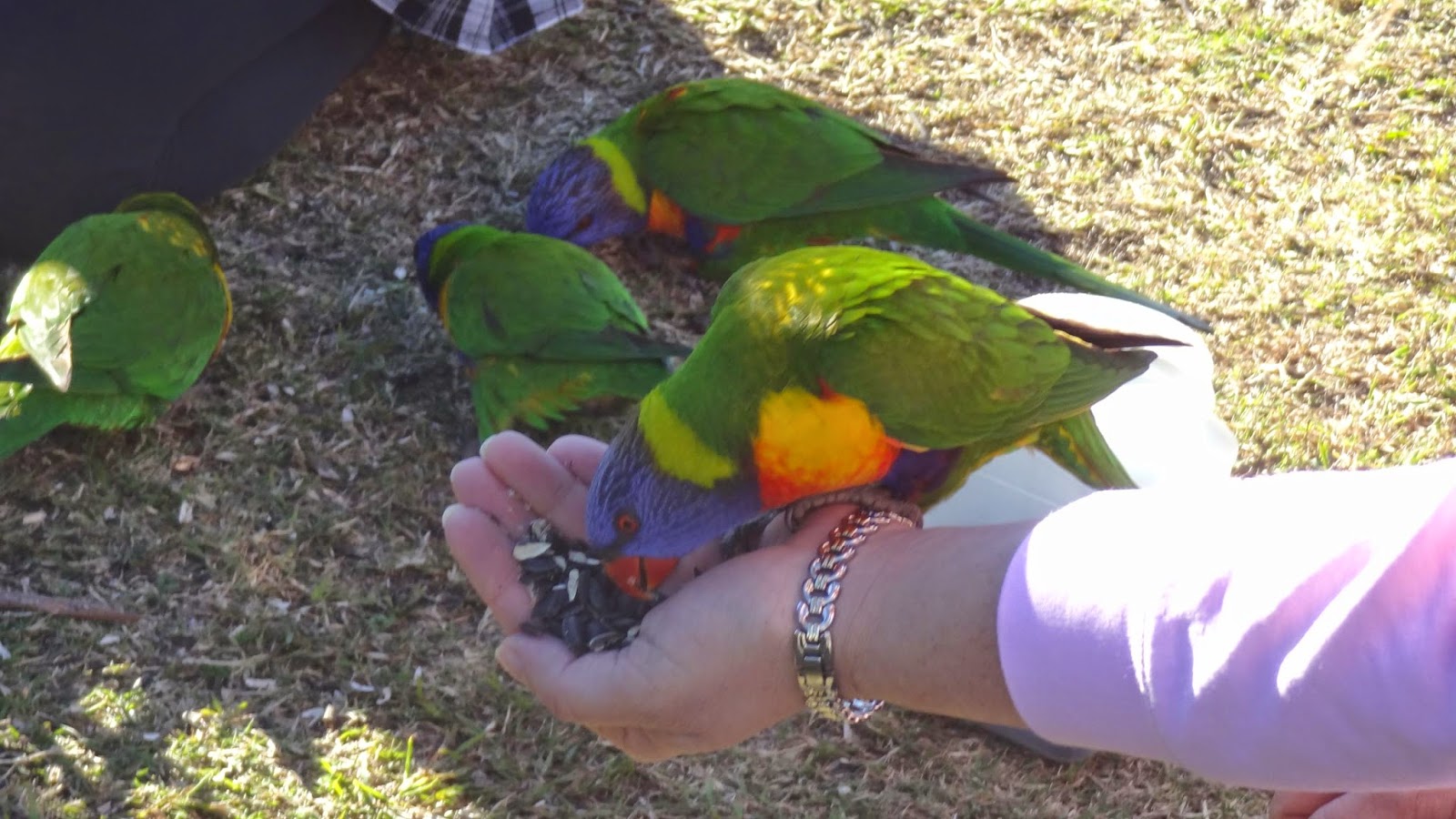 At times you can have more than 6 or 8 on your arms, shoulders, and head.


So, that’s about all that has been happening – we’re waiting on the building of the house but can’t make plans for any more trips until the builder gets things underway. Until then we must sit back here and enjoy paradise.
Posted by Cob and Oma at 12:12 PM