When the Christmas school holidays arrive so do the “No Vacancy” signs at all the caravan parks on the NSW coast. With all the parks absolutely full with families (and their numerous kids), we chose to head south via the New England high country. We’ve travelled the road many times but not with a caravan. Our younger days witnessed many 1200 km single day trips from Canberra to Brisbane; then slowing to one of one and a half days with an overnight stop at either Tamworth or Armidale. We got to see a lot of road – but not much else as we seldom stopped anywhere. The last month has seen us spend about a week at 4 different locations – and each one is a gem!


First stop was at the town of Warwick which sits within the Great Dividing Range. Given the heatwave that was engulfing the entire country, it was good to be in the cool (?) high country (only 39 deg rather than mid 40’s). We sweltered anyway.  There is a limit to how long you can sit in air conditioned shops, and even in air con caravans. We found that limit and went for a nice long drive in our a/c Landcruiser.  Our meander took us eastwards through little historic villages such as Killarney (the one in Australia, not Ireland), and the really good Queen Mary Falls – lots of good exercise walking down to the base of the falls, followed by the inevitable walk back up. Did I mention that it was a really hot day? 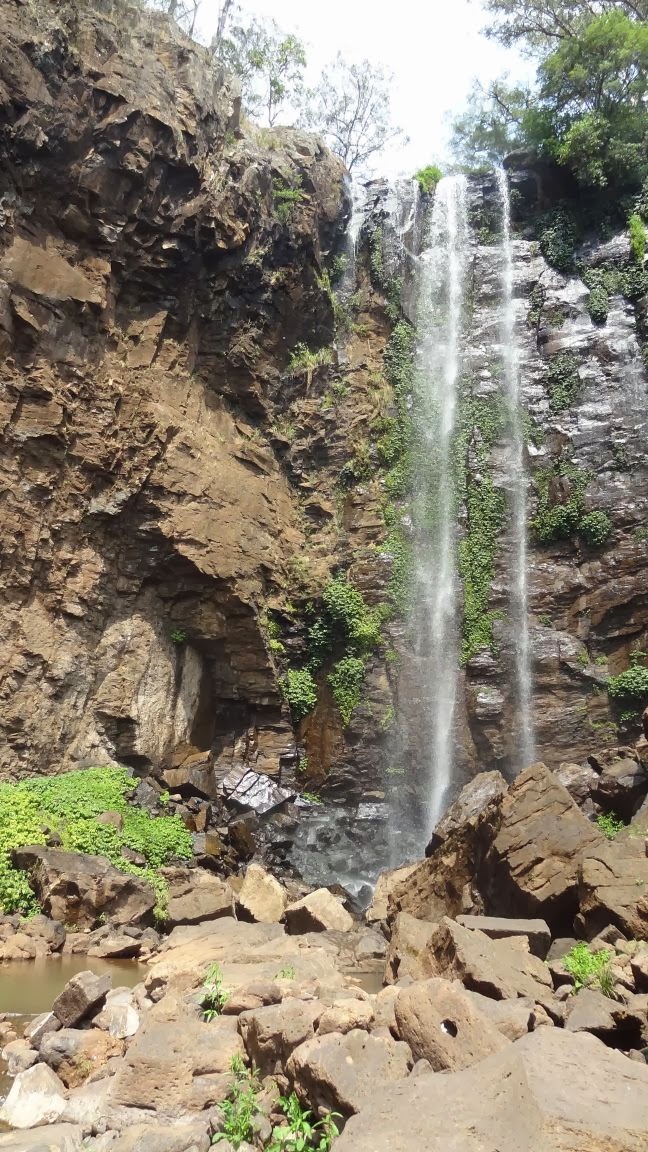 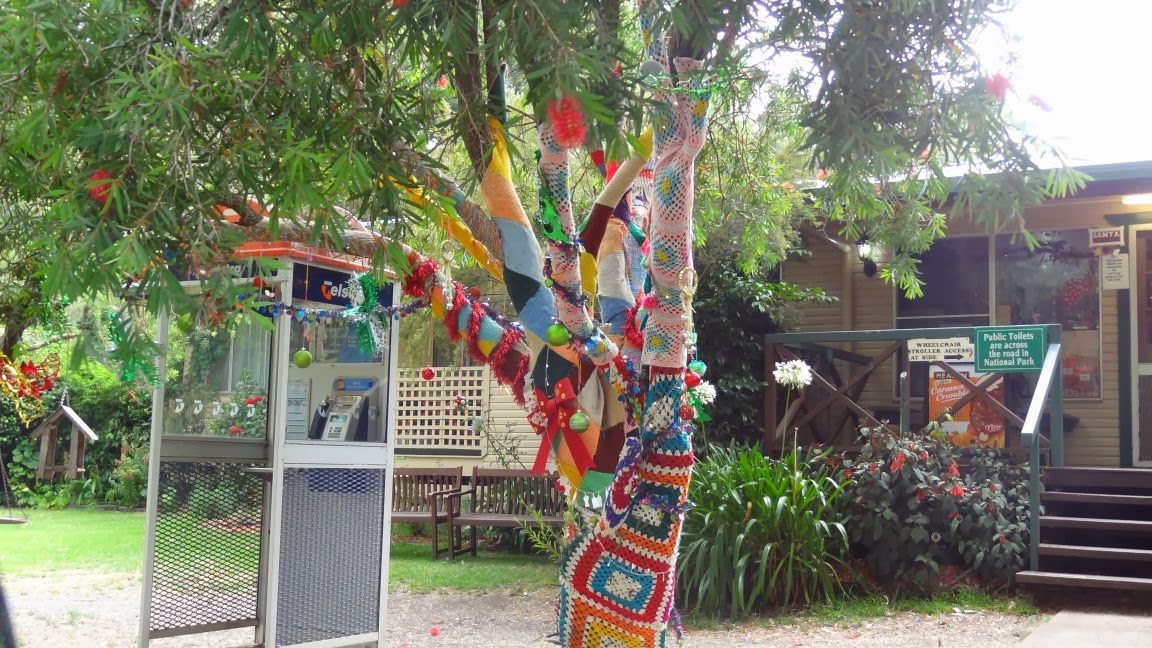 Someone at Queen Mary Falls cafe has too much time with nought to do. But, a crochet cover for a tree is cute.
Glen Innes was our next stop and what a jewel this proved to be. Many towns have their local historical museum and to be truthful, a good number of them are a simple collection of old stuff with no rhyme or structure to the poorly described display. However, from time to time you come across one that captivates you and grabs your attention – such a place is the Glen Innes “Beardy Museum”.  Located in the former hospital, it is brilliantly presented and structured in local sections that deal with the various slices of historical life in a town that has a story to tell. We spent quite some time there.


Historical matters seemed to centre our thoughts because we also did a day trip to the small (make that tiny) former tin mining town of Emmaville. Once more there was a really good museum that focused upon the 100+ years of mining life, and again we spent quite some time just looking and marvelling at how things were done pre modern machinery.


This ‘pre machinery’ era was brought to our attention once more when we did a somewhat long day trip to Grafton via the old road, and returned by the new one. When it is considered that Glen Innes sits at 1120 metres altitude and Grafton is at sea level, to cut a road of 160 km through thick scrub and rainforest, and to do so with hand tools is an amazing feat. And along the way, cut a tunnel through solid rock lifts the feat to new heights. The main climb on the new road rises 700 metres in 17 km, and the old one was steeper!


After a week at Glen Innes we decided to move on to Armidale where once more we were enchanted by a great city. We were however a little curious as why a city of 25,000 people can support only 8 pubs and 2 clubs! There were 9 pubs until just before Xmas when one of them went into liquidation.


The architecture indicates a history of wealth and prosperity and this is supported by a very impressive array of major education facilities such as a number of large private schools and a significant university.  At one stage Armidale was also home to Australia’s premier teachers college – an impressive CV. So how come these wealthy folk can’t support a reasonable number of pubs? Former Booloomimba property main house - now admin building for University.
In what became a bit of a habit, we did a day trip (wow, what a big surprise). This time we explored a number of the many waterfalls in the area – but just our luck, there is at present a drought and thus a good number of the falls are devoid of water  - including Wollomombi, Australia’s 2nd highest, but not widest, nor highest single drop, nor whatever other difference can be thought of.... A waterfall without water just seems to be missing something. 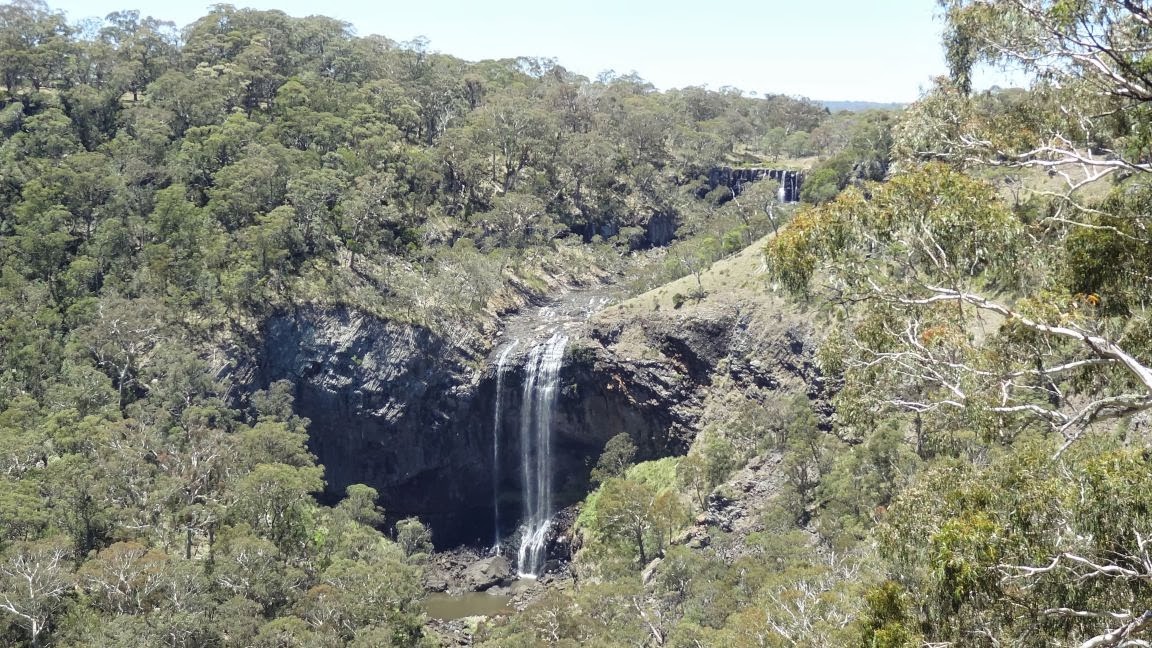 Ebor Falls with water (not much) 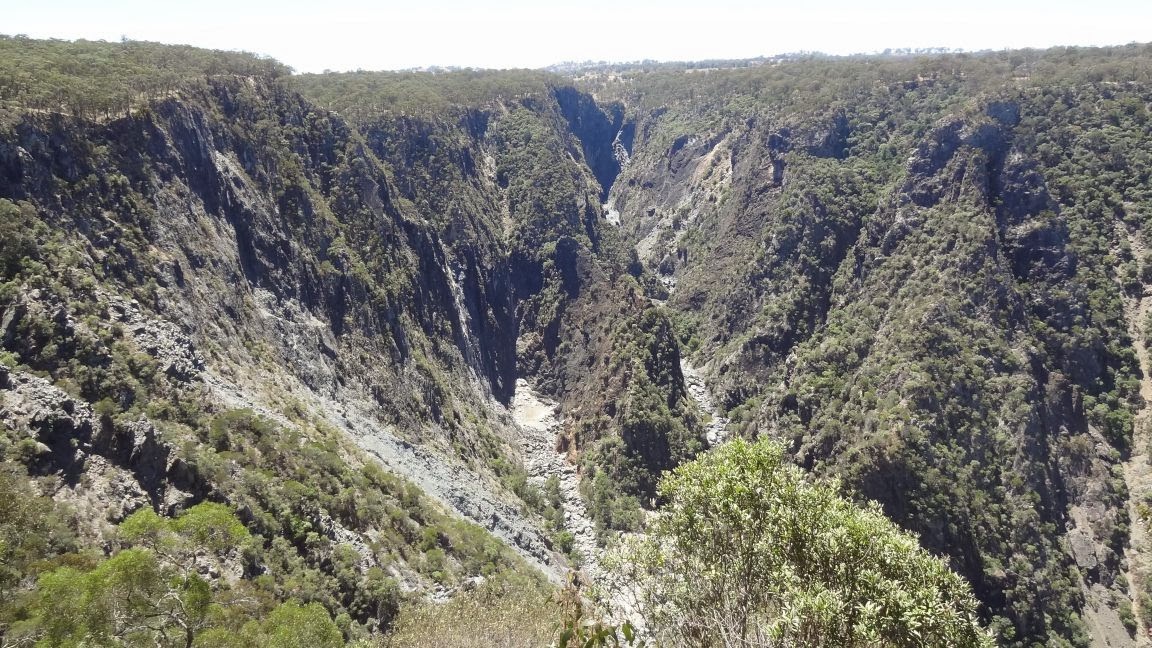 Wollomombi Falls with no water (Australia's 2nd highest not waterfall?)
So onward to Cessnock where we intended to spend time ensuring that the local wine industry was still performing up to a high standard. It was. And so was the growing industry of cheese/deli/processed food/chocolate/cafe/and entertainment. With stars such as Bruce Springsteen, Dolly Parton, and INXS appearing at gala events hosted by various wineries, it doesn’t surprise to find that tickets need to be booked quite some time in advance.


The real reason that we chose to stay at Cessnock is that the southern hemisphere’s largest display gardens are located there. These magnificent horticultural sights had been on our “bucket list” for quite some time, and so it is always a good moment when you can tick off such an item. Were we happy? Were we delighted? No, we were absolutely blown away by the proliferation of different plants and the innovative way that they were displayed. Laid out in various themes such as nations, or nursery rhymes, or Xmas they each grab your mind as it searches for superlatives. Then just when you think it can’t get any better, they shut the gardens for a few hours and re-open them at 7:30pm. Now you find that various figures, themes, plants etc are lit by over 1.5 million lights! 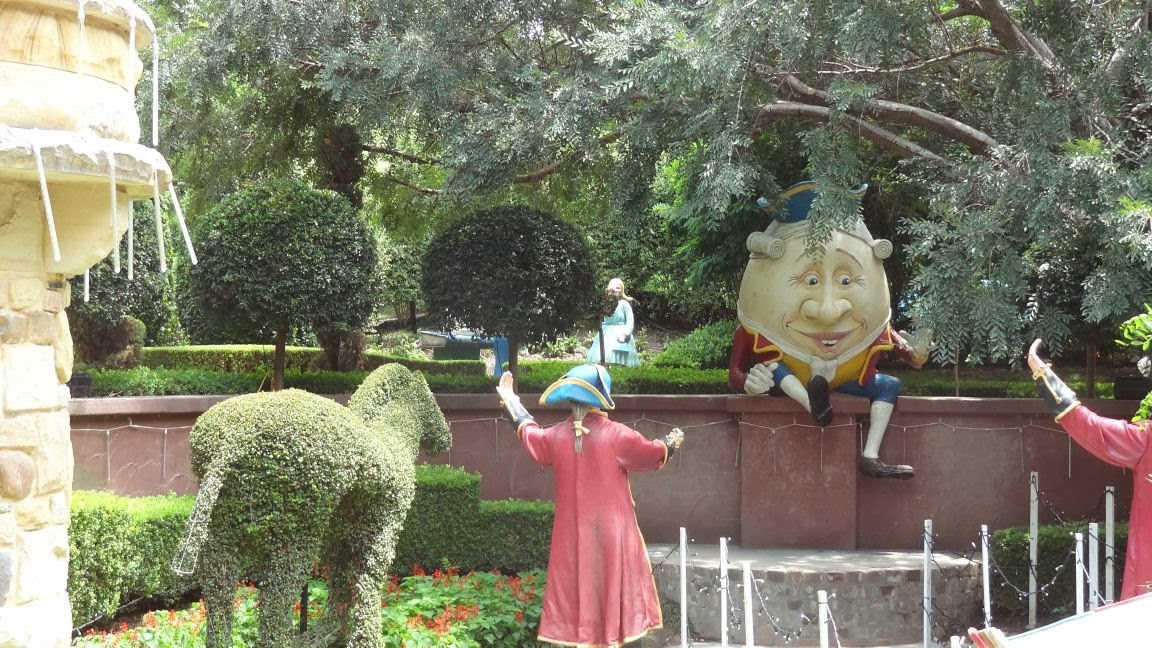 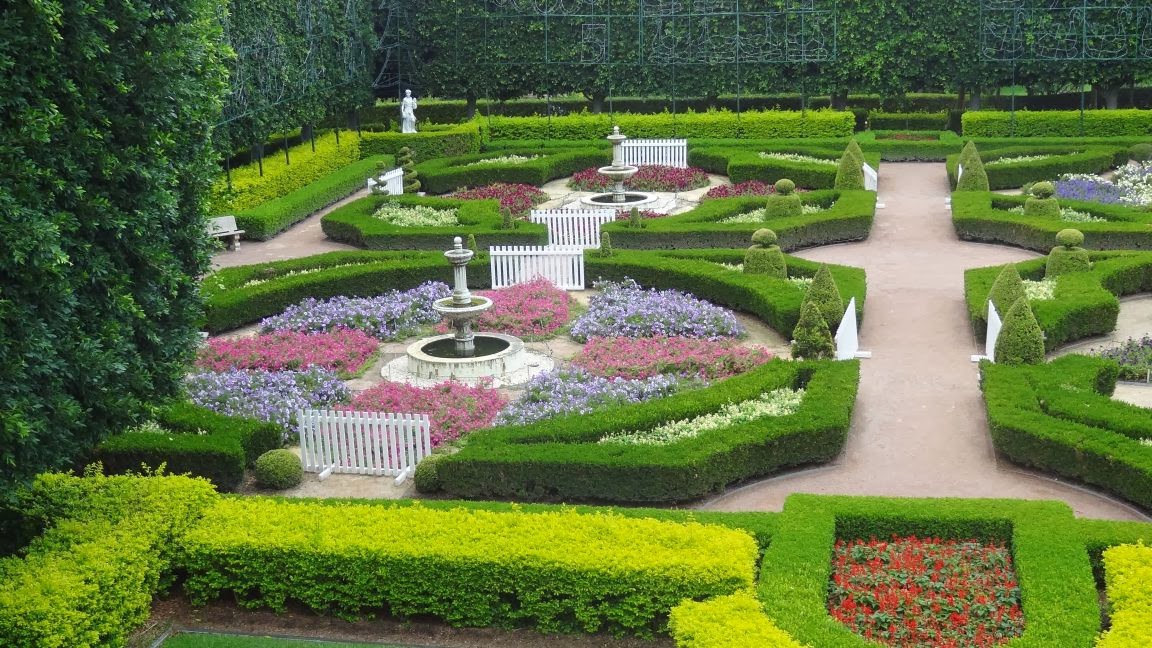 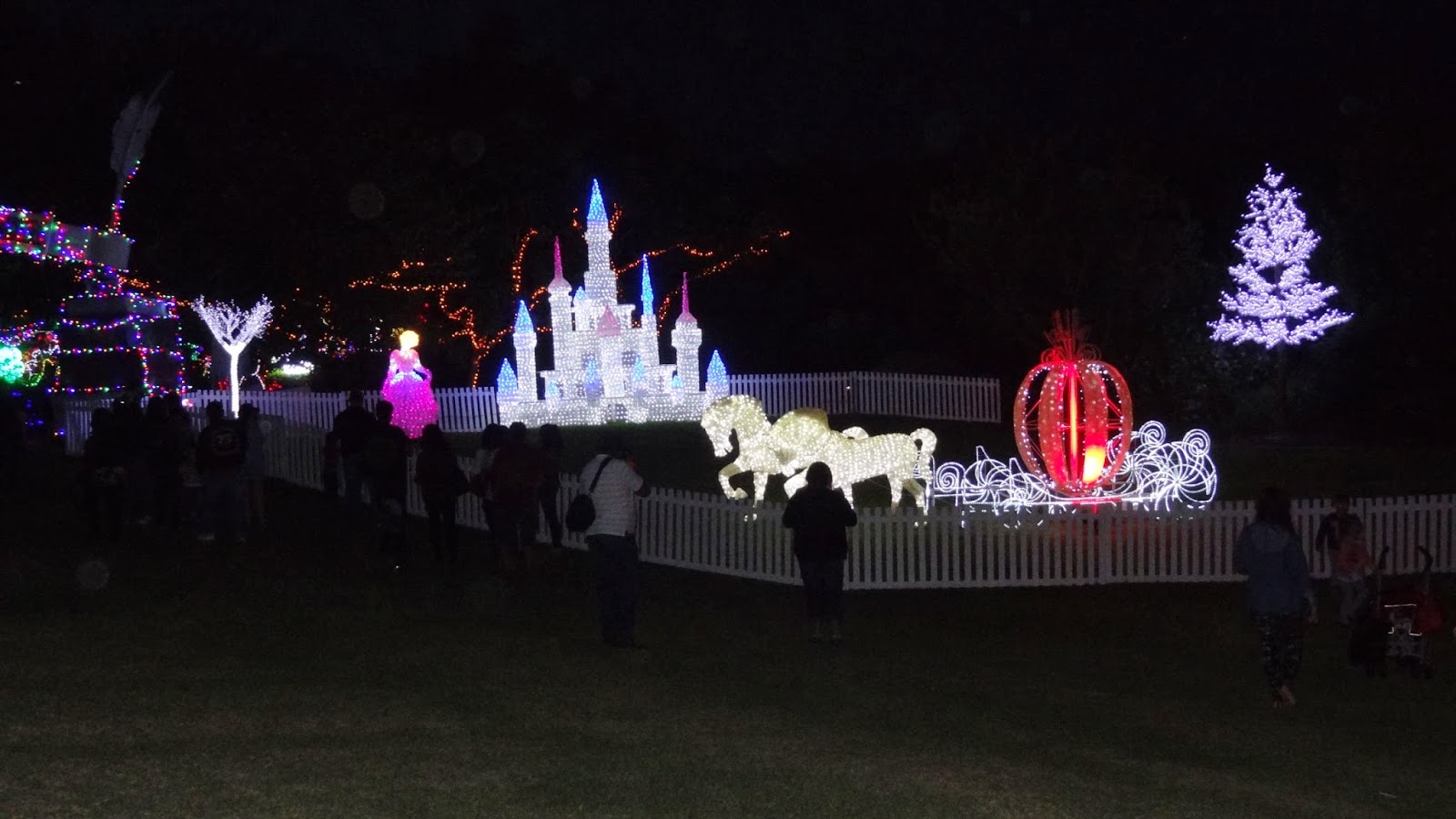 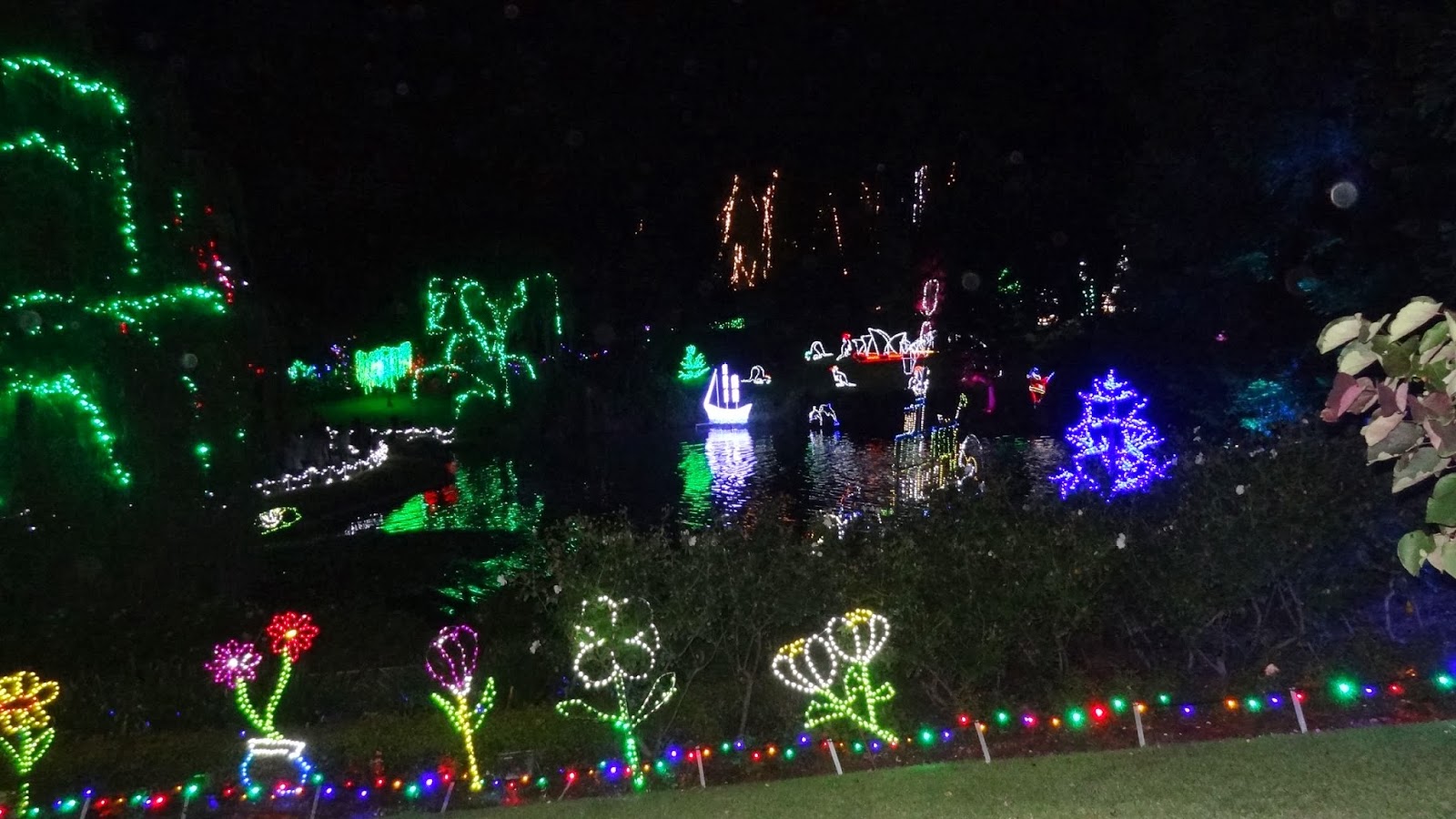 These are not just static lights, but ones that flash, blink, change colour, outline figures, perform dances, and just enthral you. This event occurs every December through to Australia Day.


We are now at Mollymook on the South Coast and spending every day searching for either a new house, or a block of land so that we can build a new house – thus not much interest for blog readers so I’ll hit the “Blog Pause” button until something interesting happens.
Posted by Cob and Oma at 11:35 AM