We have settled into Iluka but it has been very hot and windy today. We went for a walk to the seafood coop in the morning, along the path near the water. Lovely scenery and walk. It blew a gale all day and we ended up taking the awning down in the afternoon. Very hot (for us anyway) - our new weather station confirmed 32 outside, 31 inside. The van rocked and rolled, and two ducks took refuge under the back of the van. At 5.30 we went back to the coop and bought fish and chips for dinner. There are three bunnies that live at this park and they hop around all day in and out of various sites. 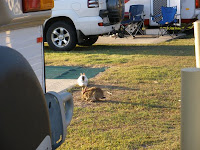 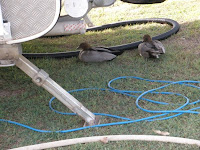 On Wednesday the wind started up again mid morning.
We went for a drive to MacLean – the Scottish town of Australia. They have 200 poles with Scottish tartans painted onto them. We round the Robertson and Macfarlane ones and took a photo. 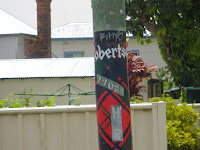 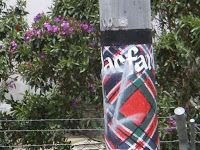 Into Brooms Head, checked out the caravan park –it goes right along the beach, with lots of tents. Then into Yamba and had lunch and did some shopping. Lots of houses for rent here; it is a real tourist haven. The wind blew like mad all afternoon and stopped finally about 6pm. There are big fires at Brooms Head tonight.

Thursday the wind dropped away and everything is real calm. I went for a walk along the walkway, Ian resorted the van’s boots. After lunch we went into Yamba on the ferry, walked around Yamba then back on the ferry. No wind this afternoon it is calm and quiet. Lovely. Bbq dinner on the bbq near our site. Fires at Brooms Head are under control, but there is smoke all around mixed with the dust haze.

The fires at Brooms head flared again overnight and the campers were evacuated.
Saturday we packed up and drove to South West Rocks. Tried the Horseshoe Bay caravan park but it looked crowded and with small sites so we left there and went to South West Rocks tourist park, picked a site down the back under the trees, not many vans around and it faces onto a creek. Its a bit of a hike to the amenities but the walk will be good for us.

Over the next few days we visited the various tourist attractions. One day it was Trial Bay gaol which was built to house the prisoners while they built a breakwater – they weren’t successful after 17 years and the gaol was closed. Opened again in WW1 to house internees. Then closed again to rot away with the weather. We shopped of course, We went for walks along the beach.
We found the wrecks of the three former Sydney ferries on the beach and in the water. They were beached in 1972 while under tow to the Philipines. Hard to believe it was only that long ago. The Kalang and Koondooloo were built as car ferries prior to the Harbour Bridge. When it opened, Kalang, after a number of variations, became the Sydney Queen showboat. Koondooloo was moved to Newcastle to ferry traffic across the Hunter. Meanwhile, the Lurgurena was built for use in Hobart, then moved to Newcastle. When no longer 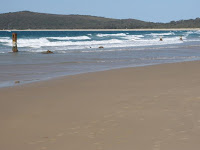 needed, they were sold off. For many years they have 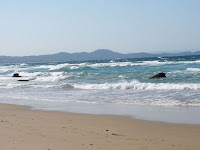 been covered by water and sand, but a storm in Aug 09 uncovered their remains. 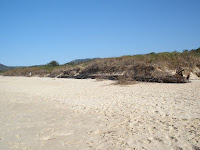 It is still a bit windy and cool at night outside, but the days are lovely. I read another book.

We visited the maritime museum at South West Rocks. Wednesday we drove to Hat Head and then into Kempsey for lunch. Smaller than we thought and spread out quite a bit into east, west, south, north Kempsey. Took the car to Toyota for 5000 oil change and waited while they did it.

Thursday we packed and moved onto Hawks Nest for a week. No more long walks to the loo. Decided to stay at Hawks nest cp rather than Jimmy’s as the write up for Jimmy’s was a bit suss. They gave us a grassy site on request and we changed it after looking at it under the tree. There are lots of holiday vans in the park but well kept and spread around the edges of the park. In the afternoon we went for a drive – glad we stayed where we did as Jimmy’s is crowded and lots of holiday vans that are not well kept. That evening we went into Tea Gardens pub for dinner. Met a couple who used to live in Canberra and have retired to Tea Gardens. After dinner went for a walk along the water then home. We can hear the surf from our van when it is quiet.

More walks along the beach, the life savers closed the surfers beach because of a shark siting - we wont be going for a swim in that water. Sunday it rained most of the day, Ian watched the car races and I read some more books.
Posted by Cob and Oma at 12:00 PM