This will be our final post for this year (Oh, sadness shall overcome us). So after some notes about the last portion of our trip, I’ll do another post with a summary of the year – everyone happy with that?
The area of South Australia that sits just to the north of Adelaide is so good it should be listed as a National Treasure. The rolling hills are just so bloody picture perfect, and the villages and towns are just what you’d like to think a village should look like. If you want some history, this area has it to spare –  ‘frinstance, everybody’s heard of the famous “I shall return” speech by General Douglas McArthur in March 1942, well it was made at the tiny little village of Terowie.  Likewise, the very first serving Federal politician to be killed was Percy Brookfield, Member for Broken Hill. He was returning home from Adelaide and when the train stopped at Riverton, just south of Clare, a bloke started shooting and Percy was killed while trying to stop him.
Kapunda (this one is a real jewel) was the home and business centre of Sir Sidney Kidman, at one time the World’s largest landowner. Kapunda is also the site of:  Australia’s first Mining Town, and Australia’s first open cut mine. Wow!  but wait, there’s more. Kapunda has supplied more state Premiers than any other Aussie town, and also was the birthplace of 30 members of parliament – have you had enough yet? 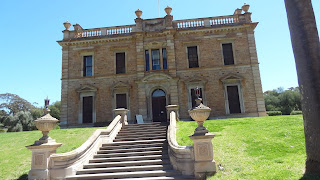 So, apart from history what does this region have? Wine, wine, and more wine. Clare valley is home to some of our best known brands, plus has ‘outposts’ of numerous others who seek the rich local Riesling grounds. We tried, really tried very hard to taste all the cellar door offerings, but we ran out of time. The Landcruiser now had a strong sag in the rear because of our few little samples that we brought home (purely so that we could continue our test tasting in the interests of scientific analysis).
We were quite besotted with the area and would return again in the blink of an eye.
As we headed across to Mildura, we paused at the historic mining town of Burra where the discovery of copper in 1842 saved the colony of South Australia from bankruptcy.  We also had a brief stop at Morgan, which was once the busiest port on the Murray but these days has retreated into a quiet holiday centre of houseboats and paddle wheel tours. 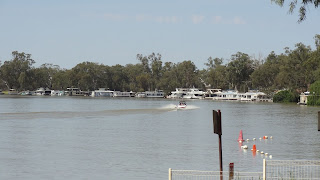 Houseboat Heaven at Morgan on the Murray 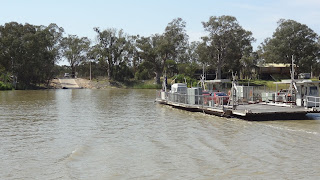 The river ferry has been operating for over 160 years

Mildura! What a magic city. The main street is Australia’s longest Avenue (12.1 km) but it isn’t the length that catches your eye – it’s the trees, shrubs, and flowers that adorn the entire length (mainly it’s the trees). Our caravan Park was right on the river where we could just sit and watch the world float by. It was really good to have a few days of simple relaxation and recharge ourselves (wine tasting at Clare Valley wasn’t easy work, let me tell you). 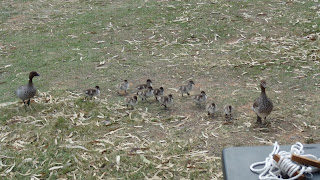 Donald, Daisy and their kids visited our site at Mildura

Now it’s time for some mental arithmetic: I want you to imagine an area 23 km long - - - - - okay, got that? Now imagine that area is 12 km wide.  That’s the total size of the Bendigo gold fields, and it had 5,600 mines!  Think about just how crowded it must’ve been. Now think about the underground tunnels with all those mines. How come they didn’t run into each other?  Over 6,000 km of tunnels still remain under the city, with the deepest at 1400 metres. We went underground to just over 60 metres, and that was really interesting, but the thought of 1400 metres is quite scary.
Bendigo has to be one of the most impressive architectural Aussie cities as it has retained most of its old public buildings from the late 1800s and early 1900s – that includes the Shamrock Hotel which is surely one of the best looking and grandest pubs in the country. The main street would have to be one of the most impressive in the country. 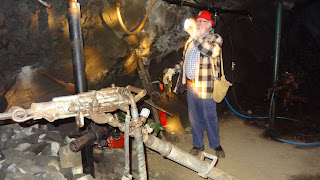 60 metres down at the coal  GOLD face 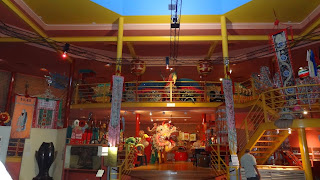 World's oldest Chinese Dragon, plus the World's longest one. The head is lower centre of photo, and curls around and upward behind photographer, to end on top level.

After Bendigo we had to go to Melbourne to have some warranty work on the van, so that left us with a day of nought to do – we took some time to go and see the two towns that were devastated by Bushfires in Feb 2009. Firstly, it must be noted that the drive from Healesville to Marysville is very very impressive – the Alpine Ash tree forests that you drive through are without a doubt some of the tallest, not only in Australia but the World.

To get to either Marysville or Kinglake requires a 500 metre high climb as they both sit atop mountains.  To see just what damage the fires did was quite an eye opener as large sections of the forests still show significant sections that haven’t fully regrown. However, the towns are where your senses come in for some deep breaths. At the Marysville info office, a map is available that shows the current status of each house and business as they rebuild. The most revealing thing to me was the number of buildings that were burned – almost the entire town.
Kinglake is quite some distance away by road, but much shorter via the treetops – the fire took the shorter route. Again, most homes are either new or under rebuild. And once more the devastation was quite mind numbing. 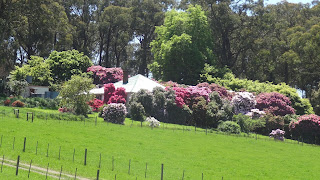 One of many such Rhodordendrum  Rhoderdendrom really awesome shrubs and bush adorned properties on the road to Kinglake. 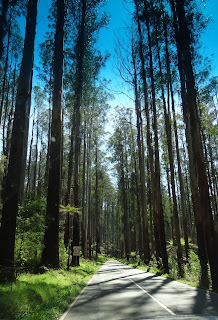 Some seriously tall trees on the road to Marysville - like this for kilometre after kilometre. 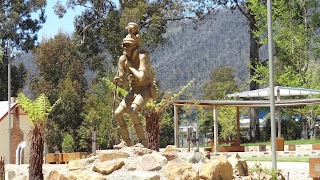 A really unusual statue at Marysville 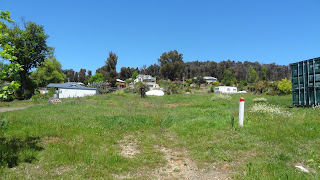 After we had our van sorted out, we travelled home via Shepparton so that we could stock up at the SPC and Campbell Soup factory outlets (up to 70% discounts),  and then a quick one night stop at Gundagai. 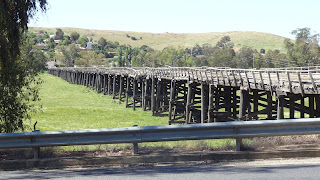 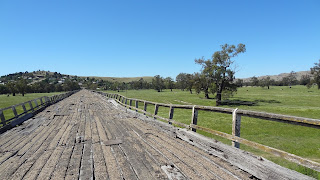 Arrived home on Saturday 3rd and it’s really good to be here – we had a great time, with so many awe inspiring sights, but there’s no place like home.
Posted by Cob and Oma at 4:52 PM