One of the odd little things about being ‘on the road’ is that you are forced into purchasing a number of products that you normally wouldn’t.  For example, different brands of shower body wash. We all have our favourites: we buy them month after month, year after year, and unless some major event occurs that forces us to change, we will always buy the same brand.  Well, the bad news is that when you go caravanning every brand of, . . . . . well, everything, is not available in every town.
Thus I need to ask: have you had a look, a really serious look at the current range of shower body shampoos?  It’s like looking at a fruit shop product list – ‘watermelon & lime’, Shea Butter & Mango’ (what is Shea Butter?), ‘Quince & Celery’, or ‘Vanilla & Cinnamon with hints of Cumin’.
Shirl & I needed a new thingo of body shampoo, so during our next shopping spree, we paused at the 23 shelves of such things. Confused by the vast array of options, we drew upon our prolific wine tasting experience to assist our deliberations.
As I tested the first, I noted to Shirl that it had a decided after feel of mango on the neck, with a soft fruity berry remnant in the lower stomach area, combined with a hint of passionfruit under the jaw. Shirl replied that the one she was testing had a soft, almost gentle feel of spice upon her breasts, coupled with the merest hint of citrus behind her knees. I selected the next bottle and liberally applied it and discovered that it had the most delightful lingering feel of fresh watermelon to my face, and simultaneously offering an almost deep and ephemeral long lasting infusion of Shea butter to the groin area (I simply must do more research on this Shea Butter).
We were quite lucky in that we had just agreed on a lovely little bottle of Cumquat & Lychee, with an infusion of crushed pomegranate seed exfoliation gems, when we realised that a number of the staff at the Geelong branch of Coles were taking an inordinate degree of interest in us. We moved on to another aisle!
Geelong is like so many former industrial cities as they drive themselves forward from their grimy history into a great rebirth.  For Geelong, this means that the former wool sales, transport, and mills have elegantly transmogrified into art centres, museums, and education facilities. 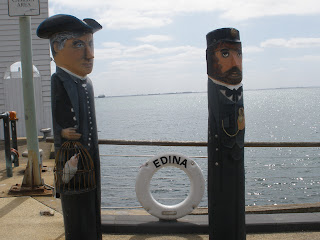 No boring wharf bollards at Geelong.
We thoroughly enjoyed the time we spent at the Wool Museum which covered the entire production from the sheep husbandry, types, and development, through the shearing and culminated in the transformation from shorn wool to finished product.
The second museum that we visited was of more interest to me than to Shirl – the Ford Museum.
For the trivia buffs, Ford’s sponsorship of Geelong AFL team is the World record for a single sporting team – 1935 or 76 years. Some vehicles of interest that are on display include the very first utility (1934 Ford), the original Ford Territory mock-up on a Falcon chassis, and the only car that Craig Lowndes has ever owned: a Ford Cortina. 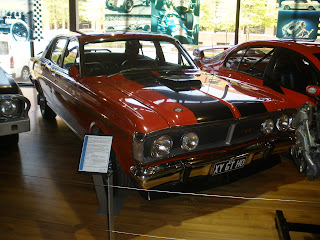 In its day, the World's fastest 4 door sedan. 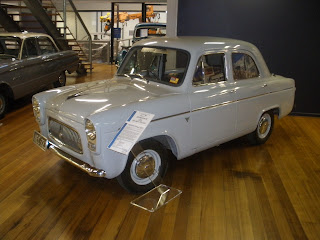 In its day, one of the World's slowest sedans!
We left Ocean Grove and headed to Mornington via the Queenscliff to Sorrento ferry. 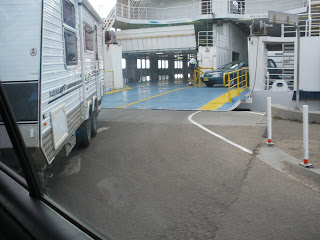 Exiting the ferry
I suppose one of the oddest things that we have noticed here are the beaches. There are absolutely no waves; none. Maybe this is a caused by the extremely shallow water in that you need to wade out for a very great distance before your bum gets wet.  This makes it really good for the little kids who splash and play with a high level of safety.  Meanwhile, many of the young adult couples wade out to groin level and just stand there and cuddle - - - yep, cuddle.  Is this some form of Melbournian mating ritual?  Perhaps some strange public accepted form of foreplay. Or simply a sharing of body warmth.
Should anyone be visiting the Melbourne area, we must recommend, no, make that most highly recommend that you take the time to spend at least a full day in the Mount Dandenong area. Our visit coincided with a quirk of weather that provided the most impressive backdrop to the mountain.  It had rained the night before, and the morning was very light misty rain. As we climbed the mountain, we drove into thick fog and mist which set off the rain forest clad terrain to perfect effect.  The town of Olinda almost consumed our kids entire inheritance as Shirl flitted from shop to shop looking at the most diverse range of craft and oddities. Lunch was also pretty special.
After lunch my wallet and I decided that we needed respite from the retail opportunities, and thus, found our way to the “The William Rickart Sanctuary”.  In 1934 William purchased a bush block in the rain forest, and set about creating ceramic statues and attaching them to trees, stumps, or left them free standing within the forest. The results are outstanding. 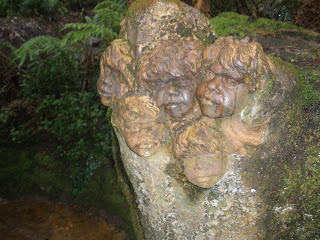 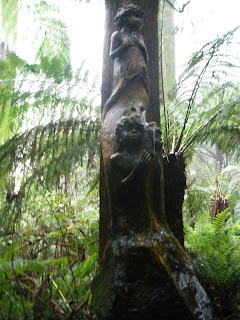 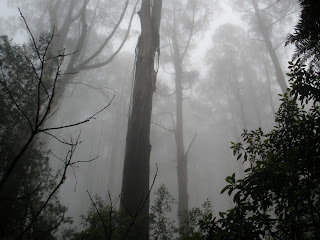 what a backdrop.
Fired up by this cultural experience, we pushed on to the National Rhododendron Gardens where we were entranced and gob-smacked by the extensive variety of rhododendrons, azaleas and, other plants from the same genus. Our timing was almost spot-on as the flowering was just past its prime – 2 weeks earlier would’ve been perfect. Maybe 10 to 20% of the blooms were starting to wither, but the broad effect was still stunning. Rather than walk, we chose to use the small bus to get around. This proved to be a wise decision as the gardens range in altitude of 150 metres and the paths measure just over 5 kilometres. 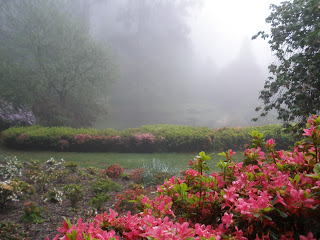 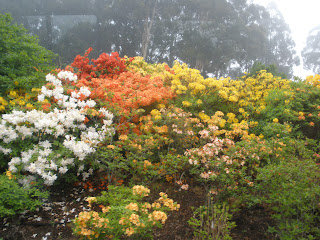 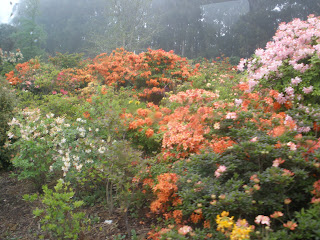 Another must see on Mornington Peninsula is Point Nepean, or the eastern headland of Port Phillip Bay.  Until a few years ago the entire headland was restricted because of the presence of defence activities, plus the quarantine station. Both are now closed, and the National Parks have taken control.
Of trivial interest is that the first allied shot of WW1 was fired from the big gun on the point. Word was received that war had been declared just as a German registered ship was about to exit the bay, so it was signalled to go about and when it continued steaming towards open water, a shot was fired across its bows. It turned about. Even more amazing is that this very same gun fired the first allied shot of WW2, and in very similar circumstances. It was the only times that the gun was ever fired.
The quarantine station is an eye opener. We found it remarkable that even in such a place, they needed to maintain the separation of the classes – first class, second class, and steerage were provided different accommodation(s).  This is even more fascinating when you consider that there were 3 types of quarantine: those who were definitely infected, those who were under watch because the doctors weren’t sure, and those who were free from infection. Thus 9 groups had to be fed, clothed, and housed. 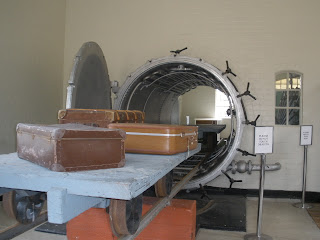 The disinfection unit - everything went through this.﻿ 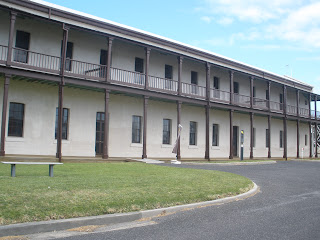 Hospital Unit 3
On our way back to the van, we paused at the Maze Gardens – two traditional hedge mazes, a great circular rose maze, and a delightfully perfumed lavender maze. I bet you’re waiting for me to say it was amazing! The truly amazing thing is that Shirl, who gets lost going to the ensuite, took to this fun place with relish. She couldn’t find her way out of course, but she giggled like a school girl and really enjoyed herself. 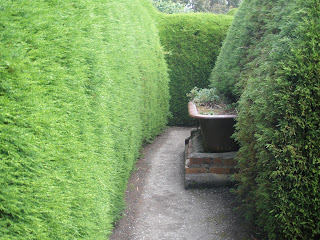 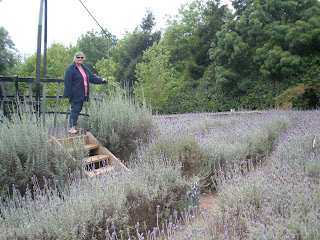 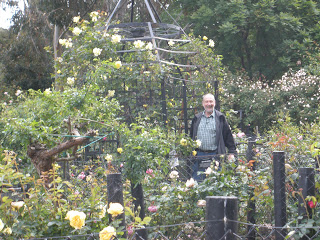 Ian lays waste to the rose maze﻿
We really liked Mornington and have now added it on our list of places to which we will return. 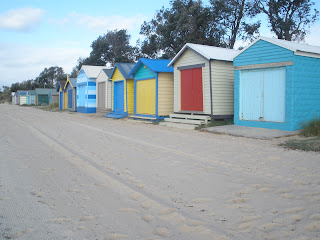 Beach huts at Dromana﻿
Thursday (27th) and we set off for Port Albert which is one of the oldest ports in Victoria. We chose this tiny little village to seek isolation from the hordes of “Long Weekend, Family Getaways” (Melbourne Cup on Tuesday = unofficial long weekend).  Upon arriving we found that this weekend is the annual ‘Snapperfest’ fishing tournament, so our isolation is not quite so. 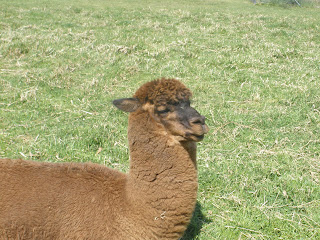 Our nearest neighbour at Port Albert﻿
Inland from Port Albert is the Tarra Valley and the Tarra Bulga National Park. Thirty three years ago we and our 4 boys camped at a caravan park located well up into the valley. We also visited the NP both in daylight and at night where we very quietly waited for the possums to come out and timidly be hand fed.  The greatest pity is that the boys remember very little of the trip – waste of damn time taking kids anywhere, bah humbug! 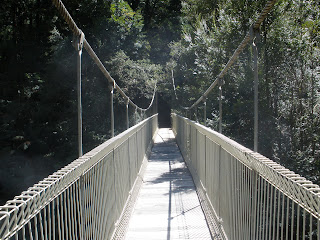 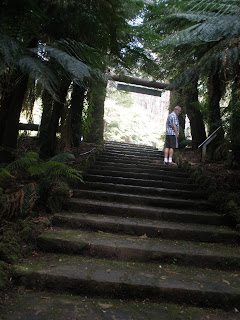