Co-incidence or what!  From the time that we started caravanning, we have followed the blog of a Melbourne couple, Mike & Minette. They sold their house and have been on the road full time for nearly 3 years, and every step of the way Min has entertained and delighted us. They'd been camped at Exmouth & Coral Bay in West Oz for some time, and then we followed them as they rather quickly moved up the coast to Broome (very short stop), and across to Darwin. Meanwhile, we were moving up the east coast and around far north Qld before setting up at Mission Beach. What do we find on day two – the fellow two sites from us was working on his boat, and I struck up a conversation with him. Wheels started to churn; facts seemed to be meshing; his name was Mike, he had a boat, he drove a Toyota LC200, he had a South African accent. Yep, it was they. Hopefully we’ll bump into them again, and share another drink or two.
The entire ‘Cassowary Coast’ is certainly showing the aftermath of cyclone Yasi. Where once there was thick and lush rainforest, there are now many fallen or bare trees with huge areas that are impenetrable because of the debris.  Dunk Island is but a kilometre or so offshore and suffered the full force of Yasi, is still closed and will remain so for 12 months or more.
Paronella Park (google it) is 20 or so km south of Innisfail and what a magnificent place it is. But, it used to be even better! Cyclone Larry in 2006, then Yasi this year has caused major damage to some buildings. Because of the unique nature these buildings can never be fully restored to what Jose Paronella created all those years ago. If you ever find yourself wondering just what you can achieve, or doubt how much you can do by yourself, visit Paronella. 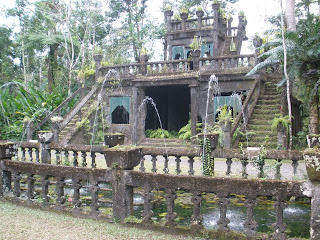 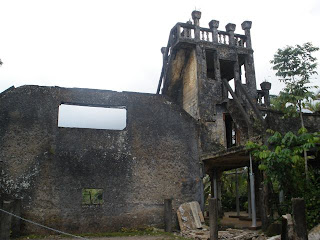 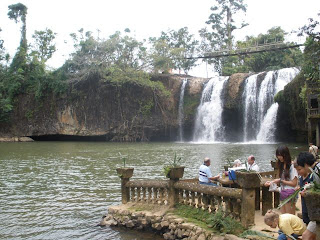 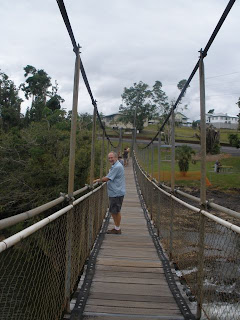 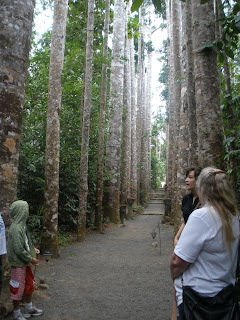 Another interesting place is Innisfail. Way back in the early 1900s the town was virtually flattened by a cyclone. The vogue architecture of the era was Art Deco, so many of the new buildings were of that style. Seeing the individual flair that this gave the town, the civic leaders chose to apply pressure to anyone doing a commercial building to use that style. The town now has a specific and definable visual appeal that clearly identifies it as Innisfail. Pity other places didn’t follow and create their own special character.
One of the odd and interesting results of Yasi relates to the amount of damage to the cane crop(s). We did a tour of the Tully sugar mill and were amazed at the range of rubbish that is scooped up by the harvesters – yes, everything including the kitchen sink. It seems that a local was in the process of doing a bit of home renovation and had his new kitchen stored under the carport when Yasi came along and redistributed it into the middle of a nearby cane crop. Come harvest time, it ended up at the mill where the sorting machinery pulled it out and diverted it to the junk bin with all the roof panels, guttering, carports, cycles, and farm machinery.
As we were leaving the mill, our tour guide handed us small packets of “Tully Sugar” with the advice that this was the only way that we could get Tully sugar in Australia!  Tully is now owned by a Chinese Govt company and doesn’t hold a licence to sell within Australia. The entire output is exported to China.
Mission Beach is a wonder to behold (even in its Yasi modified guise) as it seems to go forever, with each step backed by tropical rainforest or palms, and fronted by an island dotted sea of aquamarine. Typical of Queensland beaches, it is quite shallow and you need to walk out a fair way before you get your bum wet.
Our caravan site is totally surrounded by rainforest that, like all this area, holds small populations of cassowaries.  We had the magical experience of a male and his chick (yep, the female walks out as soon as she lays the egg) visiting the park and just wandering around like a movie star. 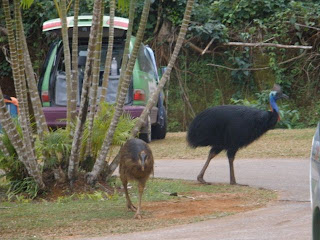 Packing up now and moving out to Townsville.
Posted by Cob and Oma at 11:20 PM